Root roast — Earthy summer eats from the oven — with radishes? 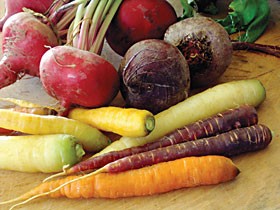 What foods do Americans miss when they are abroad? I never asked anybody, not even my husband. The only person whose food longings I can relate is Mark Twain. I recently read his autobiographical book, A Tramp Abroad , written in 1879 while on an extended stay in Europe. It includes a scathing assessment of the cuisine offered by European hotels:

The number of dishes is sufficient; but then it is such a monotonous variety of UNSTRIKING dishes. It is an inane dead-level of “fair-to-middling.” There is nothing to ACCENT it.

After negative reviews of pretty much everything he has eaten during his stay, Twain sees the light at the end of the tunnel, since he is getting ready to travel back home, where he is planning to eat:

He goes on to mention about 80 more American foods from buckwheat cakes to squash pie. On first reading, the list made me think about the menu of a Baroque banquet, but what amazed me most was the first item: Can one really miss radishes so badly?

Mark Twain and his nostalgia came to mind during my next visit to the Farmers’ Market. In his honor, I chose a cheerful bunch of radishes. I find them quite attractive: piquant underground cherries that, just like that fruit, are prone to be eaten serially. From reading Twain’s outpour you would think radishes are impossible to find in Europe, but at least in Italy they have been known since ancient times. They are one of the raw vegetables traditionally served in pinzimonio , that is, with a dipping sauce made of olive oil, pepper and lemon juice or vinegar.

After putting the bunch of radishes in my bag, I decided to use them in my next rendition of a favorite recipe that I found in an old magazine and adapted to my taste. The beauty of this recipe is that it leaves room for experimenting with various combinations of items collected under the umbrella definition of root vegetables: beets, carrots, parsnips, turnips, etc. Although the original recipe did not include radishes, I felt entitled to add them to that day’s version. Choosing different ingredients in different proportions gives the dish a different personality each time. When I make it, my husband invariably comments that eating it brings him back to his roots, a place not otherwise specified. Root vegetables taste definitely substantial and earthy. Most of them, radishes included, are also quite generous, considering that both the above- and the below-ground portion are edible.

I would have never thought of including radishes in a variation of the dish had I not just read a recipe for roasted radishes in one of the culinary blogs of which I have become a frequent visitor ( Kalyn's Kitchen ). Roasting radishes was a novel option for me, who had always thought raw radishes were the thing to root for.

After the radishes, I bought a couple of loose red beets, which contribute not only their sweet flavor, but also a brilliant color. I added a small bunch of carrots and then procured a couple of items not from the market: a rutabaga and two leeks. The leeks, garlic and rosemary constitute the fixed elements of the dish. The rest is a combination of root vegetables of choice for a total weight of two pounds.

Later that day I made and savored the dish. Radishes contain more water than other root vegetables, a characteristic they maintain when roasted and that created a delightful contrast in the context of the medley. Their peculiar piquancy is detectable, softened by the cooking process -- the texture and flavor definitely pleasant. I can only suggest you try.

The next time I visited the market it was bereft of radishes, a condition that failed to inspire me to write like Mark Twain. However, I had a close encounter of the third kind with a glorious bunch of Chioggia beets. Before the beets, I had purchased a Marina di Chioggia squash (or pumpkin -- both names are used) seedling for my garden and the two events made me fall into a reverie. Chioggia is a port city located on an island at the south end of the lagoon at the center of which is Venice, my favorite city in the world. I visited Chioggia (rightly called “Little Venice”) many years ago and found it charming. The beets and squash are not the end of the city’s vegetable story: there are also Chioggia celery, radicchio (ball-shaped, which I often use in risotto), potatoes, white round onions and carrots.

My journey into colorful root vegetables was not yet over. After Chioggia beets and the usual couple of red beets, I met a happy bunch of carrots in which the orange ones were outnumbered by purple and yellow cousins that, given their unusual garment, attracted my attention. While the yellow carrots are yellow through and through, the purple ones are orange at heart. They were not the only bi-color vegetable in my basket: Chioggia beets, in fact, are white and pink, and the rings of alternating color have garnered them the nickname of bull’s eye beets. When I arrived at home, I realized I had forgotten the leeks, so I decided to co-opt the sweet-smelling torpedo onions I had just purchased into a role they may not have chosen on their own accord, but one I thought would suit them well.

Whatever the selection, the end of the story is a side dish that serves four. Preheat the oven to 375 F. Generously spray a 13×9” baking pan with olive oil.

Scrub all the root vegetables, after cutting off the greens (possibly setting them aside for ulterior use). If using carrots, scrape them to remove their outer skin. Pare away inedible parts from the other root vegetables, but don’t peel them. Chop all into bite-size pieces. Try to adapt the blade action to the shape of the vegetable at hand with an eye towards compositional harmony, enjoying their colors as you go along and protecting your clothes from unwanted red-dying, compliments of the beets.

Put the pieces in the baking pan. Wash the two leeks carefully and slice their white and light green portion into 1/8 inch-thick rounds. (If using torpedo onions, remove the thinnest outer layer before slicing and halve the wider slices.) Add slices to the vegetables, together with 5-6 cloves of coarsely chopped garlic and about 10 whole cloves. (This is basically the only dish I make in which I splurge with garlic. I have done a controlled test and verified that a good amount of garlic is indeed required.)

Finally, sprinkle all with a tablespoon of minced fresh rosemary and some freshly-ground black pepper, spray with more olive oil, then put the pan in the oven.

Bake for at least one hour, stirring every 20 minutes or so. I bake for 70-75 minutes, because I like the vegetables to be quite soft. The baking time depends also on the size of the vegetable morsels. Take out the pan from the oven, add one tablespoon of balsamic vinegar, sprinkle a bit of salt (to taste), stir well and serve immediately.

There is no need to figure out what to do with the leftovers because there will be none to speak of. People really do like to go back to their roots, and eat them too!

A combination of root vegetables (beets, carrots, radishes, rutabagas, turnips, etc.) for a total weight of 2 pounds, greens cut off.

Scrape the carrots (if using) to remove outer skin.

Chop into bite-size pieces and place in the baking pan.

Add leeks and garlic to the baking pan.

Sprinkle the rosemary and pepper and spray with olive oil.

Remove pan from oven and add balsamic vinegar and salt.

Simona Carini is a native of Italy who splits her time between Trinidad and Berkeley. She writes about Italian foods also on her blog: briciole.typepad.com.