Rot from the Head

Or, why I don't eat local so-called 'sushi' 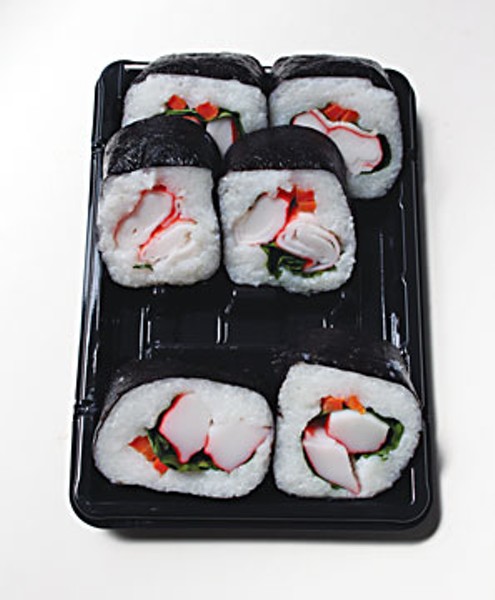 Sushi and chilés — they were the weapons of our courtship; dinner was the battlefield where we challenged each other's culinary valor and food the forge on which our relationship was tempered. I was already verging into the more intense flavors that would define "Pacific Rim" cuisine. She had the most highly developed sense of smell I've ever known. She was highly sensitive to capsicum; I hated raw fish. I was a master of vindaloo and fermented lemon pickle; she had a personal sake box at the legendary Hama in Venice.

Somehow it worked out. We became increasingly daring with each date, and have never looked back.

There's more to it, of course. I taught her to love cilantro, she introduced me to raw oysters. I learned to make gefilte fish, she discovered the secret to Cajun "blackened" spices. But in those early days, everything was a challenge.

For someone who'd never given much thought to the intricacy of Japanese cuisine, the '80s in Los Angeles were a heady time. Sure, there were the Hollywood joints where celebrities were inventing "California rolls," creating the new fad — no one would have dreamed that in just a generation, kids would be asking for sushi instead of Kraft Dinner — but the real action was at a sprawling place near the beach, where a small army of Japanese chefs made wondrous dishes and joked profanely with their customers and nubile young Asian women poured endless bottles of warm sake (the regulars had wood boxes, personalized with marking pens, the rest of us used the regular thimble cups). No tipping of the cooks, of course, but you could buy your guy a bottle of beer. As the night wore on, the chefs became tipsy, and the offerings outrageous. "Here, try this!" (A rolled sea-urchin roe omelet.) "Now this!" (Shreds of raw lobster with bitter cress sprouts and aioli.)

Hama. The cutting edge of Los Angeles, in the last years of our pretending to be surviving the music biz. Giant clam tempura. Monkfish foie gras with ponzu sauce and frisée. Tea-smoked Kona amberjack sashimi. Tony Bourdain would have loved it, but he was only a year out of culinary school. Our last night there, the chef was deep-frying live giant prawns. One landed between us, looking like a space invader. "The eyes!" he commanded. "Eat the eyes first!" We obeyed. They tasted like deep-fried peppercorns.

So there was a time in my life when "sushi" represented excitement and adventure, going places new and dangerous, subjecting my palate to The Unknown.

Then there's Humboldt County. I've tried, God knows, but the sushi is, and has nearly always been, pedestrian at best. "Pretty fresh" fish (or thawed Ahi) over sticky rice. And "vegetarian sushi"? Don't get me started. One local chef says: "One thing you have to admit, selling a nickel's worth of rice and a thin carrot stick and/or a cucumber wrapped in seaweed for 5-6 bucks seems like a profitable way to go ... I was intrigued by a conversation I had with a Japanese kid (a college student) who was rolling sushi at Yadayada. He said that what Americans assume is traditional Japanese fare is not at all the same as what you'll find in Japan — and not just the seafood part, the way the rolls are done."

Right. Japanese sushi rice is more fermented, more sour, less sweet. Middle America has welcomed sushi into the mainstream by making it more like everything else: more sugar, less intense flavors, more ordinary. We corrupt everything we touch. We turn it into our own little Disneyland of "just slightly exotic" food. Sushi, once the most personal food experience (the vendor molded the ball in his hand, pressed the fish over it, and handed it to you), is now something supermarkets have in plastic compartments in refrigerated cases.

So I don't eat local sushi.

And another thing: chilled sake is the rage now. If you want sake warm, you are considered a bimbo. But that's exactly backwards. Chizuko Niikawa is a sake sommelier at the low-profile/high-priced Sakagura in New York's Wall Street district. Asked what's a common mistake, among even her very wealthy clientele, she says: "Americans believe only cheap sake is better hot. That's wrong, actually. And our restaurant never uses a microwave, because it tastes totally different. We use hot water and put superpremium sake into it for just one minute. It shouldn't be extremely hot." Needless to say, Humboldt restaurants warm only their cheap sake.

Let's see: semi-fresh fish, dull preparations and cheap sake ... not what I'm looking for in a dining experience.

Yeah, I'm picking on Humboldt County, but in fact, for a few years, there was a woman chef in Eureka's Old Town who was really special. Not of a particularly creative bent, she made up for it by her dedication. A fisherman told me when he came in at dawn, she was down at the docks, looking for anything special. Those who knew her would save the oddities they couldn't sell to the distributors, but even her standard fish was fresher by a day than that which had to go through Mr. Fish or Eureka Seafood. Still, there's more to a restaurant than a great chef, and the place changed hands.

Freshness is certainly critical, something you will understand if you've ever tasted salmon cooked the same day it was caught — it's almost a different food altogether. But there's an element equally important. Sushi for me equates to falling in love, to the romance and adventure of the unexpected.

To get that, we travel five hours south to Rohnert Park, to a tiny place called Hana. Its chef, Ken Tominaga, now divides his time with a new St. Helena restaurant, but a decade ago his menu returned us to our days of puppy love, with dishes like "Crunchy Roll": prawn tempura, flying fish roe, tempura ball with unagi (eel) sauce and a special salad of seared bonito with a wasabi/tobiko aioli, crisp diced duck skin, sliced cucumber, tomato and baby greens in a large rosette.

Sensing we were in the presence of greatness, we asked for "something special." Ken produced an 11-inch "sea serpent" of crisp salmon skin rolled around tempura scallop, smoked eel and avocado, with octopus rounds and salmon roe for the eyes and a mizuna tongue, all segmented and coiled on a bed of seaweed and fermented rice.

That is what sushi is all about for us.

Baby Squids: Marinated — a complex texture, but not "chewy" — with dabs of fresh Oregon wasabi on their tiny heads.

Butterfish Sushi: Warm and simple. (I should note that Hana adds wasabi to dishes that need it, which is traditionally correct for nigiri sushi.)

Crispy Spicy Roll: Rich, sweet, tart, tempura, something I didn't quite get, with yellowtail, black sesame seeds and Japanese aioli.

The Hana sake menu has increased over the years from seven to 34 (with commensurate prices), seven routinely served warm, but others on request.

It would probably be unrealistic to expect something like this meal from a local restaurant. What's their motivation to upgrade? They are full all the time. Sushi has become the Denny's of the educated middle class.

There is a myth that sushi is part of ancient Japanese culture. Nope. The use of raw fish, the essence of today's sushi, began only after World War II, when the development of high-speed transportation and modern refrigeration and freezing equipment made it possible to transport and store raw fish safely.

So it is perfectly acceptable, should anyone care, to do any number of variations. No violation of tradition, no karmic doom impending. You got a better idea? Do it.

No takers so far. And why bother? Safeway/Co-op/Wildberries-grade sushi is a lot easier to come by than sushi-grade sushi. Partly it's the age we live in. The world (including food) is being homogenized around us. But mostly it's complacency. Humboldt doesn't really give a shit about good sushi. And it gets what it deserves. Like a "dinner" at some quasi-Japanese-food place that avoids the main issue by offering tempura platters, teriyaki "boats" or dinner-theater "teppanyaki."

On the other hand, would a truly good sushi place survive? We're talking maybe $20-30 per person, plus beverage, tax, and tip. I hate to invoke "Humboldt Restaurant Syndrome," but my guess is it would fail. And who wants another grave in the cemetery of failed experiments in good food?

Process to combine evenly. Once combined, pour the newly made sauce into a baggie, and pinch a tiny hole in the bottom. In order to use the sauce, simply squeeze the baggie and let the sauce leave a trail of hotness along the roll. But it's equally good with steamed vegetables.