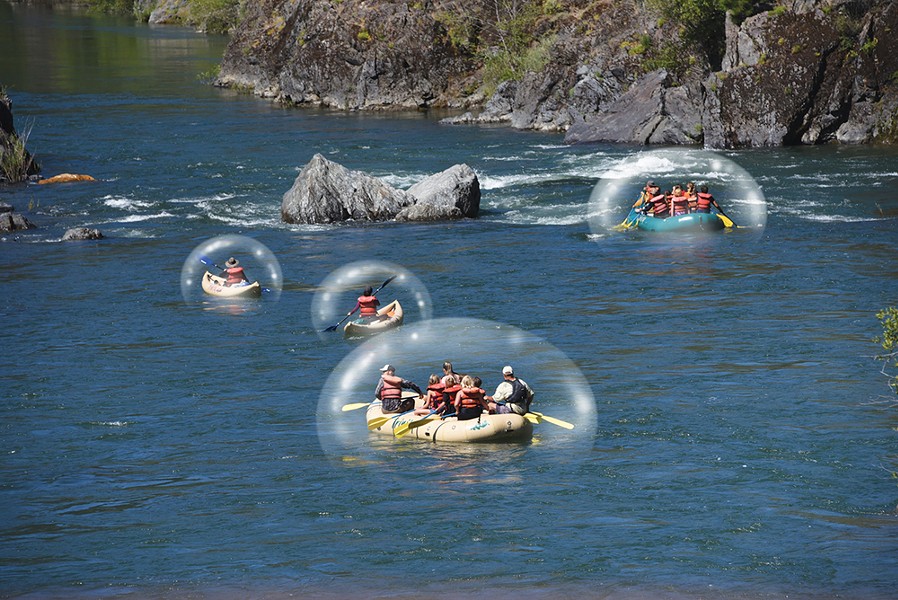 Submitted Trinity River Rafting inserted bubbles into its photographs to emphasize the ability of rafters to social distance.

The water level on the Trinity River is just right and the hot summer weather is ideal. But a month after local white-water rafting businesses received approval to reopen from county and U.S. Forest Service officials, company owners say that reservation numbers are still modest. School and church groups have all canceled and the absence of international travelers has also been challenging, the owners say. But California families are picking up some of the slack.

"After being under quarantine was so hard, people are saying, 'We want to get outside and see the world,'" said Six Rivers Rafting owner Shandy Otto. "It's such a great way for families to bond."

On Sunday, one such family of five from Southern California (who asked to remain nameless) embarked on a trip down the Pidgeon Point run with Trinity River Rafting. The family is traveling around the state in a rented RV, the mother said, which was difficult to come by. Setting out on the river, though, the whole family was smiling.

Upon reopening for Memorial Day weekend, area rafting companies all instituted safety measures: Masks are required while traveling in shuttles, which are disinfected in between groups; items like canteens or dry pouches for phones are no longer provided; hand sanitizer is abundant. Most importantly, groups are not being asked to mix with other groups. Instead, folks are riding the river within their own "social bubbles," made up of friends and family members.

To emphasize this point to the public, Trinity River Rafting co-owner Dana Steinhauser even hired a designer to Photoshop bubbles around rafts in company photographs. "At lunch we have separate spots, separate tables," Steinhauser said. "It's a totally separate trip for each family."

In a 13-foot raft, it's possible for the rafting guide, who steers in the back, to remain 6 feet from guests. But if an individual falls out or needs rescue — as this reporter did at the pinball rapid — coming into closer proximity may be necessary. Those concerned about this are better off renting inflatable kayaks or paddleboards, and floating calmer stretches of the river around Willow Creek and Big Bar. Over at Bigfoot Rafting Co., owner Brianna Carreira estimates that she's seeing about 30 percent less business than she did at this time last year. But that's actually exceeded her expectations. "Some people are shocked when I answer the phone," Carreira said. "I didn't think I'd have a season but weekends are starting to pick up."