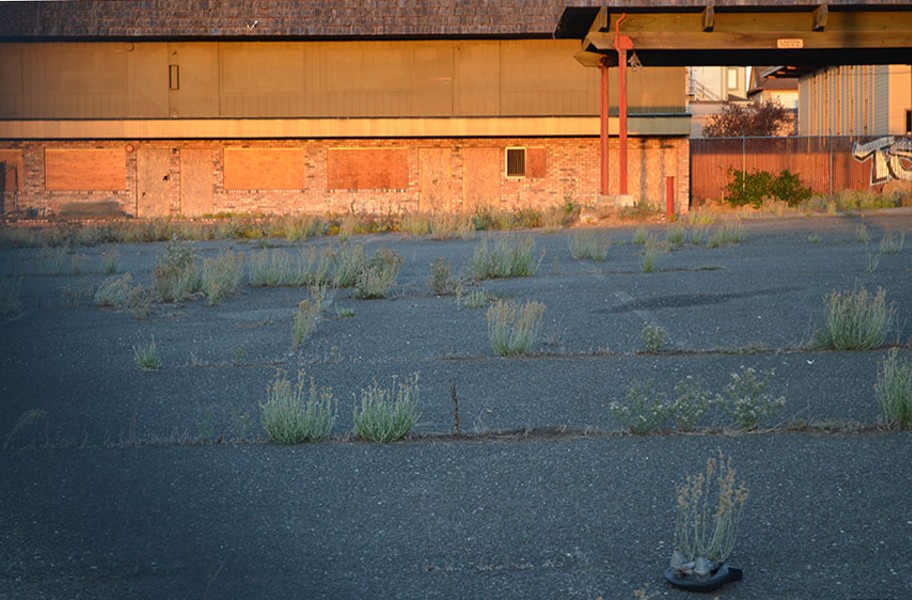 Humboldt County may not have the allure of Detroit, Chernobyl or other vast abandoned areas that have become destinations for amateur and professional explorers and photographers. The "urban exploration" boom that draws people to the shriveling Salton Sea and the catacombs of Paris is less popular here.

But ruined Humboldt has its pilgrims. Their signatures are the overgrown trails to sites, a few seemingly abandoned online forums and the word-of-mouth community of graffiti artists, explorers and hobos.

Here's a small sample of Humboldt's disused and forgotten structures. Relics of war, industry and community. We found far more than could be printed here. And there's likely many we overlooked. But live vicariously for a moment and imagine what these places meant to someone, to the community, in the past. And get out and find some secret spots of your own. 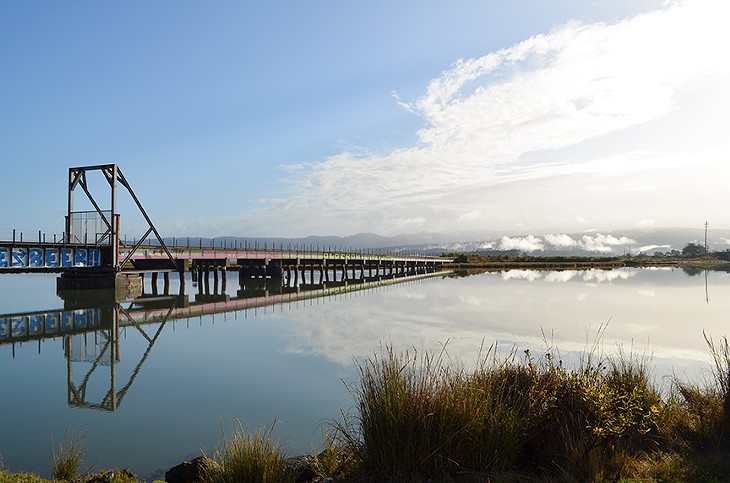 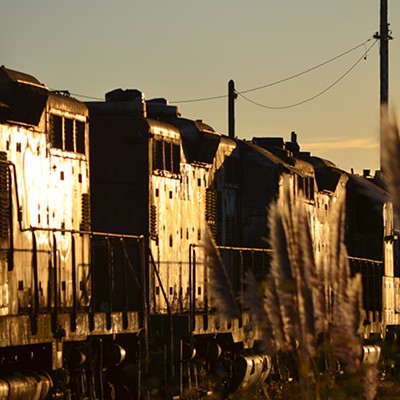 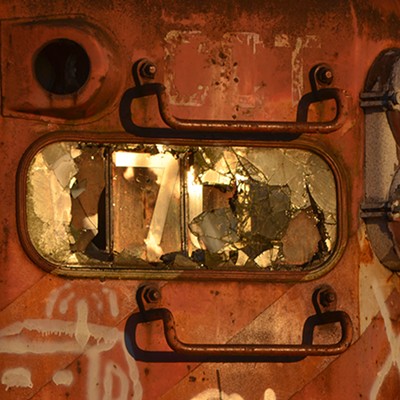 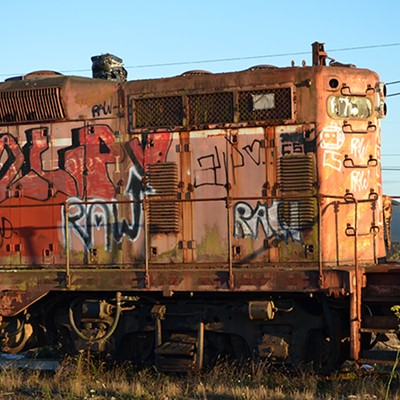 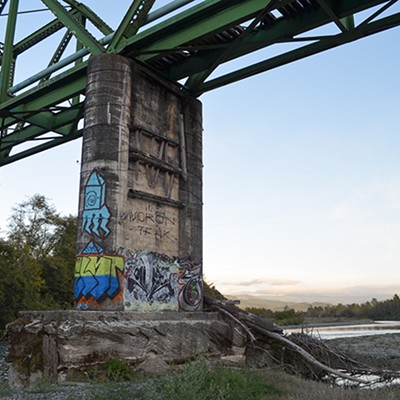 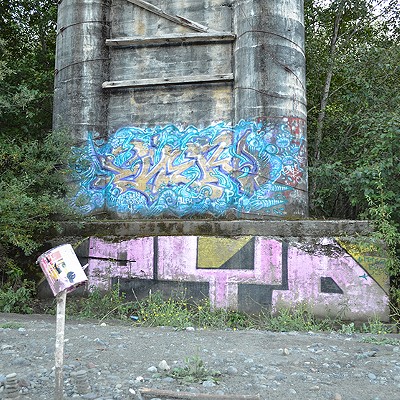 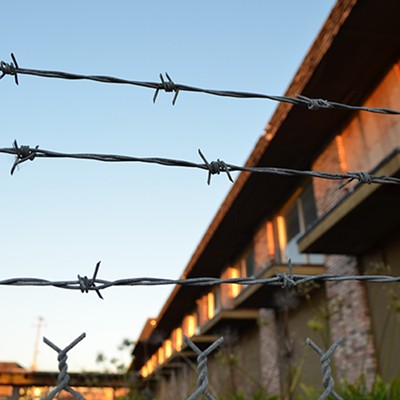 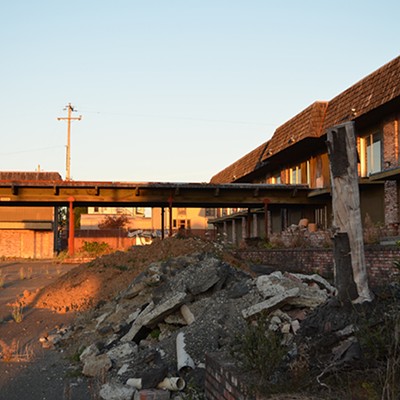 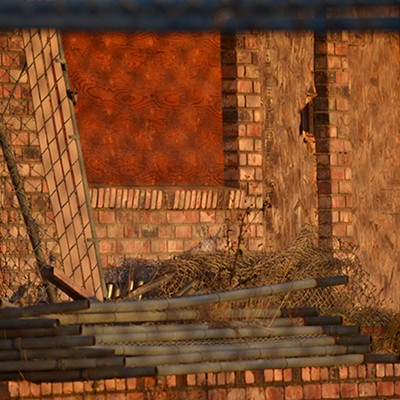 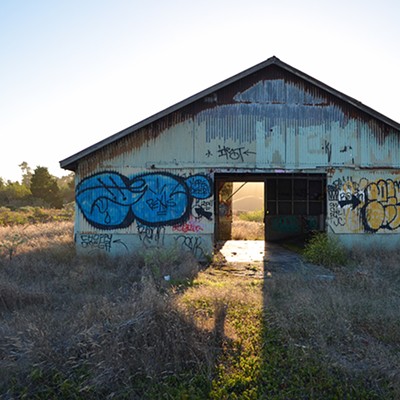 A rare glassy bay at the mouth of the Eureka Slough — part of the disused and disputed Arcata-Eureka rail easement.

The abandoned rail cars and engines on the Balloon Track harken to a time when rail connected the Humboldt Bay region to the rest of the nation. Now they're a favorite for graffiti artists. A tall (and in places, breached) chain link fence surrounds the forlorn vehicles, with rusted wheels and shattered windows.

In 2006, Security National purchased the property and removed one of the 13 boxcars abandoned on the land when the rail yard went out of use in the 1980s. A press release said Security National was committed to "turning the Balloon Track into a tremendous asset for Eureka."

Seven years later, several boxcars and four engines remain. In a December 2012 interview with radio station KINS, Security National owner Rob Arkley said he intends to sell them for scrap. "I'm going to go to war to get those out of there," he said.

These steel paeans to the county's former timber and rail industries stand firm, spanning the Eel and Mad rivers. The bridges — rusty and missing many of the wooden ties that support the rails — are still in better shape than the lines that extend from either side of them, particularly south of Pepperwood on the all-but-swallowed-by-the-earth Eel River Canyon line.

The Eel River span can be spotted from Highway 101 near Founder's Grove. Walk about 1,000 feet up the Mad River from Pump Station No. 4 to find the other.

The Downtowner sat empty for more than a decade. Kitty-corner from the Eureka Inn, which also spent some years shuttered, the motel was ringed by a barbed wire fence several years ago — an attempt to keep squatters and others out (see the Journal cover article from Sept. 16, 2010, "The Town Downer").

Years of discussion about what to do with the property haven't produced results yet, but Councilwoman Marian Brady told the Journal last month it's a priority for her to see the Downtowner Motel restored.

Not much left of this shack on Vance Avenue near Samoa — a bay-front property strewn with broken glass and a revolving graffiti tableau.

The building, now owned by Humboldt State University and used briefly as the foreign language studies building, has all the hallmarks of a hospital: an amber-hued, diffusely lit chapel, curtain tracks in the ceilings of the old patient rooms and — most ominously — a morgue. HSU facilities director Traci Ferdolage wouldn't let the Journal enter the basement, which houses the former morgue. When she offers a peek inside, black mold creeps four feet up the corridor walls, and a blitz of musty air rushes forth from the below-ground level.

Ferdolage is no stranger to ghost stories. She said an otherwise skeptical contractor recently came to her with concerns about the noises he was hearing while inspecting the building. Campus police found nothing, but returned when the contractor, growing less dubious of paranormal possibilities, complained again. This time, officers found evidence of a squatter. The building, with numerous ground-level windows, has the same issues with uninvited tenants as any abandoned building, Ferdolage said.

A fading mural on the old Co-op Building, at the foot of E Street in Eureka.

Curving north out of downtown Loleta is the old Northwestern Pacific line, which punches through about 2,000 feet of Table Bluff. While the light of the far entrance is visible from the south end, the mouth of the tunnel is faintly ominous. We trudged into the dark, discovering that the other end is farther than it seems. Looking back at several points, the entrance was still much closer than the end, and the light at the end of the tunnel grew in size much more slowly than we'd expected. It was too dark to see the ground past the first hundred or so feet without artificial light. Lime deposits seeped out of the wet spots on the tunnel walls. Remains of a campfire cozied up with discarded alcohol bottles, clothing and paint cans. A slight, dusty-smelling cool breeze glided through the tunnel, with no echo to speak of. At the center of the tunnel, all was eerily quiet.

The remains of Sweasey Dam sit about five miles upriver from the Mad River Fish Hatchery. If you know the wide gravel bars of the Mad near Blue Lake, it's hard to imagine that the river runs through a narrow gorge just a few miles upstream. Sweasey Dam was built in 1938 and provided water to Eureka before it was completely filled with debris in 1969. By the end of that year's winter storm season, there were 2.4 million cubic yards of sand, logs and gravel plugging up the dam, according to an American Society of Civil Engineers report. The dam was dynamited in 1970. Now, only the high walls on the banks of the Mad remain. Twisted pieces of steel and rebar begin to appear in the river as you approach it from downstream.

Since burning in 2008, the former Emerald — a head shop on the corner of Spear and Alliance in Arcata — has remained empty, charred timbers still visible.

That icon of Loleta's skyline is reduced to a cluttering of cracked brick buildings, rusting tanks and "no trespassing"-adorned fences overgrown with pampas grass and berry vines. The creamery was shuttered in 2008, but remains a destination for fans of B horror films (Halloween III was filmed at the creamery) and there are rumblings of renovations and repairs (see Heidi Walters' Sept. 12 cover story, "Main and Loleta").

The Navy cruiser has been all but claimed by the Pacific Ocean (who named that body of water anyway? Terrific Ocean would have been my vote) since running aground in 1917. Only a few jagged pieces of the boat — and a shoreside monument — are visible at low tide. The ship was beached attempting to pull free a submarine that ran aground on Samoa Beach in 1916. The submarine was later rescued intact, while the Milwaukee was abandoned and a pier was built to allow the Navy to strip the ship of its munitions and documents.