Runes in the Ruin 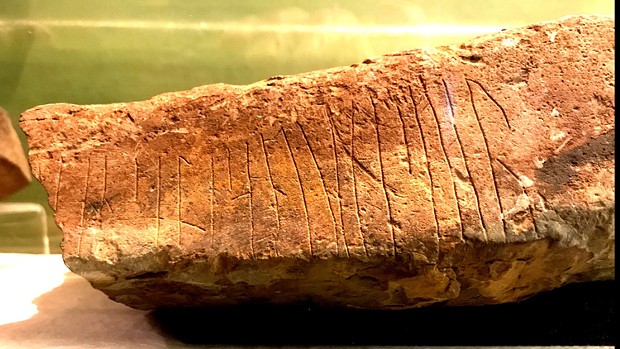 When diggers (calling them archaeologists would be too kind) broke into a 5,000-year-old Maeshowe passage grave in Orkney, Scotland, in 1851, they soon realized they weren't the first intruders. The walls of the Neolithic tomb were covered with about 30 Nordic runes dating from the 12th century, one of the richest collections of such writing ever found. And in a lovely example of serendipity, we know not only who carved the graffiti but when they did so. An entry in the Norse Orkneyinga saga, written nearly a century later, relates how a group of Viking warriors led by Earl Harold sheltered there during a fierce snowstorm in 1153 A.D.

The messages on the stones range from the Kilroy was here variety ("Haermund Hardaxe carved these runes," "Benedikt made this cross") to your standard public toilet scratchings ("Thorni fucked, Helgi carved," "Ingigerth is the most beautiful of all women" — next to a crude image of a slobbering dog). Interestingly, the gravesite, buried beneath a cairn, isn't that large; I'm not sure more than 30 people could fit in it. Yet the runic messages all appear to be carved by different individuals, meaning that most or all of these rough and tough Viking war dogs were literate.

To the untrained eye, these roughly carved notes are illegible: long spindly vertical strokes with diagonal twiggy lines that distinguish one letter from another. Turns out, though, they're easily relatable to our own alphabet. No surprise there, as they have common roots dating back to early Italic (as in Italy), Phoenician and Etruscan, predecessors of the Roman alphabet. The earliest variety of Runic script, Elder Futhark, dates back to the first century A.D. (Futhark comes from the first six letters of the Runic alphabet: F, U, TH, A, R and K.) A comparison of some of the letters makes the connection with our own alphabet clear. Here, for instance, is the nonsense word THRIMBOF written in Futhark script:

Other than later examples written on parchment, one obvious characteristic of all versions of runes is their angularity. Like most old alphabets, they were designed for carving in stone or, especially, wood, so they have no curved lines or horizontal strokes (which, parallel to the grain, could split wood or be hard to read).

How did Roman-style script end up in Northern Europe two millennia ago? Probably via German mercenaries. From the first century B.C. to the fifth century A.D, the Romans increasingly hired Germanic warriors to do their fighting for them, and it's easy to imagine Roman customs, together with writing, being adopted by less civilized (in Roman eyes) tribes north of the Rhine.

Runes haven't quite died out. Nazi "scholars" adopted them in their attempt to link Nazi Aryan mythology with Nordic mysticism and you can still buy books on runic divination at any bookstore. Not to mention The Hobbit, J.R.R. Tolkien's original "Middle Earth" epic, in which cryptic runic symbols appears on Thrór's map. Actually, not so cryptic, with a little help from Google.

Barry Evans (barryevans9@yahoo.com) still finds it astonishing that we can reproduce the spoken word with just a few symbols.