The Promise and Free Fire 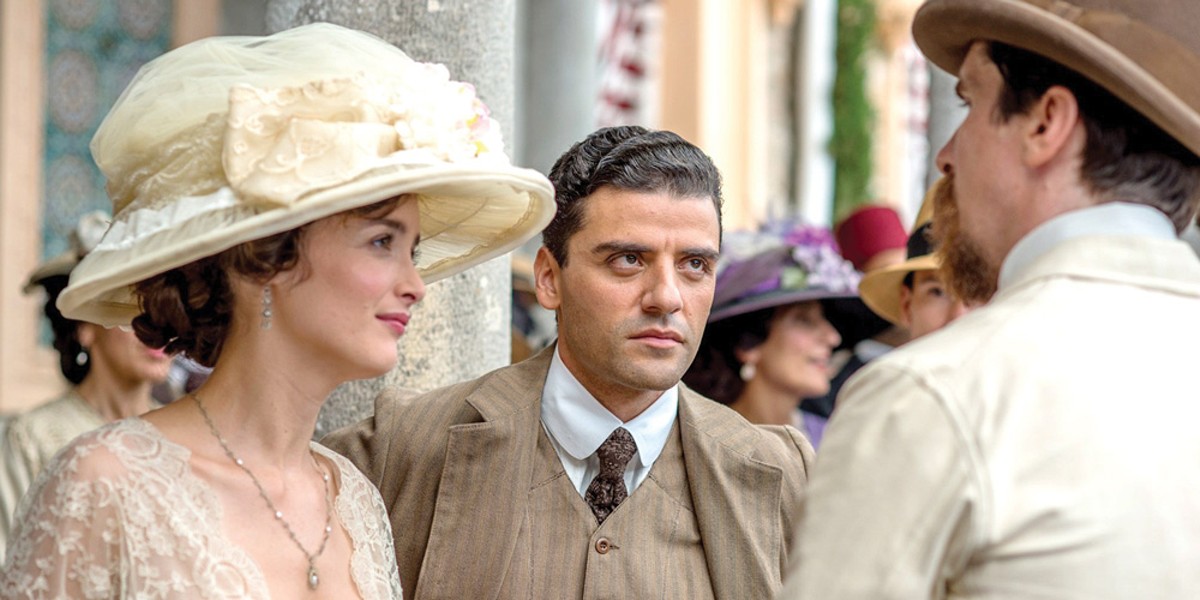 THE PROMISE. And so we revisit the conundrum of the historical drama, tangled with as recently as last week regarding The Zookeeper's Wife. Again, a movie takes as its setting a horrific 20th century catastrophe — this time the outbreak of World War I and the Armenian genocide — and attempts to capture a moment of it, to somehow clarify it by peering at it through the lens of a dysfunctional love triangle. Also again: fake accents, an uncomfortably clunky framing narrative and a surfeit of capital-A Acting. The results, as one might have guessed, are once more decidedly mixed.

In a tiny village in rural Turkey, populated peacefully and equally by Armenians and ethnic Turks, Mikael Boghosian (Oscar Isaac) ministers to the villagers in his role as apothecary. He dreams of expanding his medical knowledge to bring modern medicine to underserved communities like his own. In aid of this goal, he becomes engaged to a woman he barely knows, planning to use her substantial dowry to finance his medical school tuition, which he does immediately after the announcement of their betrothal. He disembarks in Constantinople and enrolls in the imperial medical college. Taking to his studies with great aptitude, Mikael starts to settle in and make friends, and then falls hard for Ana Khesarian (Charlotte Le Bon), a strong-willed teacher who happens to be involved with a prominent American journalist. He, Christopher Myers (Christian Bale), has been writing about the developing situation in Europe for the Associated Press and is vocally critical of the alliance being brokered between Germany and the Ottoman Empire. Rightly so: Soon enough, war breaks out, Turkish men are conscripted into military service and Armenians are either driven underground or rounded up, supposedly for evacuation. Mikael becomes separated from Ana and Chris, ends up in a labor camp for some months, escapes and then makes an arduous journey back to his village to honor the promise he made to his fiancée Maral (Angela Sarafyan). Along the way it becomes clear that the Turkish government is using the chaos of world war to obscure an institutionalized effort the wipe out the Armenian people, an effort that has a direct, immediate and devastating effect on Mikael.

It feels discourteous to criticize art that would challenge us by bringing to light a vast, organized tragedy that is not talked about often enough. The Armenian genocide was an event of monumentally shameful proportion and, even though it only took place a hundred years ago, it is rarely and barely discussed. So for taking on the topic with any measure of success, praise is due to Terry George (Hotel Rwanda, 2004) who directed and co-wrote The Promise, with Robin Swicord (Memoirs of a Geisha, 2005). And there are successes within the movie: The rich detail of its sets and costumes creates a distinct, almost palpable air of place and time; the relationships and attractions at the heart of the story are plausible and appropriately complicated; the cast is loaded with prominent and talented players, with cameos from James Cromwell and Jean Reno.

In attempting a grand, novelistic telling of its story, though, The Promise falters and loses its way. There are too many scenes, too many characters with inadequate development, too much exposition and hand-wringing speechifying. Isaac, usually an actor of great power and nuance, is reduced here to much wailing and dead-eyed sulking, alternating between humanism and a not-quite believable need for revenge. Visually, too, the movie is unsettled — pans of grand vistas are intercut with jarringly unfinished-looking handheld camerawork. It's kind of mess, technically and aesthetically, and this robs the story — a fascinating and important one — of its impact. PG13. 132m. BROADWAY, MILL CREEK.

FREE FIRE. Ben Wheatley's work could not unkindly be characterized as deeply misanthropic. Kill List (2011), mashes up contract killer noir with mystical horror, to pleasurably off-putting effect. Sightseers (2012), a cock-eyed honeymoon road comedy, boasts a body count to rival its predecessor. And his adaptation of JG Ballard's High Rise (2015), which could be looked on as a noble failure that I quite enjoyed, suffused as it is with menacing 1970s futurist angst, plays like a logical progression from those earlier works.

Now, though, Wheatley has reduced the scope of the storytelling: Where High Rise made a vast apartment block the setting for an allegory about humanity, Free Fire essentially takes place in one room, with most of the players lying on its floor.

Boston, 1978: Two Irishmen, Francis (Michael Smiley) and Christopher (Cillian Murphy) are in town to buy a large quantity of assault rifles. Justine (Brie Larson) is their point person with Vernon (Sharlto Copley), a flamboyant South African arms dealer backed by the sardonically sinister Ord (Armie Hammer). The groups meet, accompanied by attendant flunkies, in a derelict warehouse on the waterfront to exchange guns for money. Tensions run high from the jump, though, and in no time at all, the movie becomes a protracted gunfight.

Books could be written about the mathematical complexity of staging and filming an hour-long shootout but that exegesis is best done elsewhere. More to our purpose here, Free Fire is, for fans of genre movies, double-crosses and wide-collared suits — America in the 1970s, in other words — a brisk, stylish, gritty good time. Funny, bloody, deceptively complex in its construction, it pays homage to its influences while also doing something innovative and fresh with them. It is not for all tastes. But for the right audience, it may be exactly the right movie. R. 130m. BROADWAY.

COLOSSAL. Anne Hathaway is a woman watching her inner turmoil manifest itself as an enormous monster wreaking havoc on the other side of the world. (I feel you, Anne.) R. 109m. BROADWAY, MINOR.

BEAUTY AND THE BEAST. The cast, style and scale are impressive, but the moody darkness and slow pacing of this live-action/CG fairytale reboot seems tailored for nostalgic grownups more than kids. Starring Emma Watson and Dan Stevens. PG13. 100m. BROADWAY, FORTUNA, MILL CREEK.

BORN IN CHINA. Live action documentary follows panda, monkey and snow leopard families in the wild. With John Krasinski, thankfully narrating and not cast as a panda. G. 76m. BROADWAY.

MY LIFE AS A ZUCCHINI. Claymation story about an orphan who finds friendship and family among other children at a foster home. PG13. 70m. MINIPLEX.

THE SENSE OF AN ENDING. A man inherits a diary that has him revisiting old wounds and mysteries. Starring Jim Broadbent and Charlotte Rampling. PG13. MINOR.

SMURFS: THE LOST VILLAGE. For those adults about to take children to this animated movie, we salute you. With Ariel Winter, Michelle Rodriguez and Joe Manganiello. PG. 89m. FORTUNA.

UNFORGETTABLE. Rosario Dawson and Katherine Heigl throw down as a new stepmother and the crazy ex-wife tormenting her. R. 100m. BROADWAY, MILL CREEK.

YOUR NAME. Japanese anime about teenagers in different towns who swap lives in their dreams. PG13. MINOR.

THE ZOOKEEPER'S WIFE. Jessica Chastain delivers a fine performance but this stylish drama about a family losing its Eden-like zoo and rescuing Jews from Nazis is diminished by faulty pacing and keeping the horrors of the time off screen. PG13. 126m. BROADWAY, MILL CREEK.