Sacred Surfboard Up for Auction

A sacred surfboard hand-painted by artist Alex Escudero Ochoa as part of the Paddle out for Peace — a floating ceremony at sea that honored black and brown lives cut short by police brutality — is now up for auction.

The June 14 event took place in the cove south of the Samoa Peninsula’s Coast Guard station and included speeches from several locals activists including Ochoa. He stood beside the surfboard he designed as he shared its meaning with attendants.

"This object is not just a surfboard anymore," he said. "It has become now a sacred ark for the spiritual transport of the souls of some of my brothers and sisters so forcibly robbed of living here amongst us in the garden." 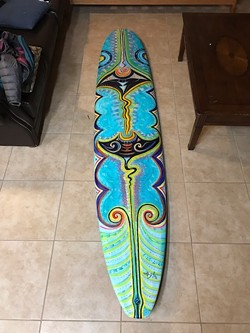 He went on to explain that the design on the board included two manta rays because the word for the creatures in Hawaiian, "hāhālua," also means double breath. “Double breath because that is what was stolen from you,” Ochoa said. “Breath, breath, beautiful departed souls … you have not died in vain.”

The Vernor surfboard was initially donated by Jen Smith, a Humboldt County woman who bought it back in the 1990s. Ochoa delaminated it and painted it with acrylics. The new owner will need to seal the board before it is again seaworthy.

The bidding began at $150 and has since climbed to $448. Proceeds will be divided equally among Black Humboldt, Eureka NAACP and the Northern California Indian Development Council. Bidding ends Friday, June 25, at 10 p.m.