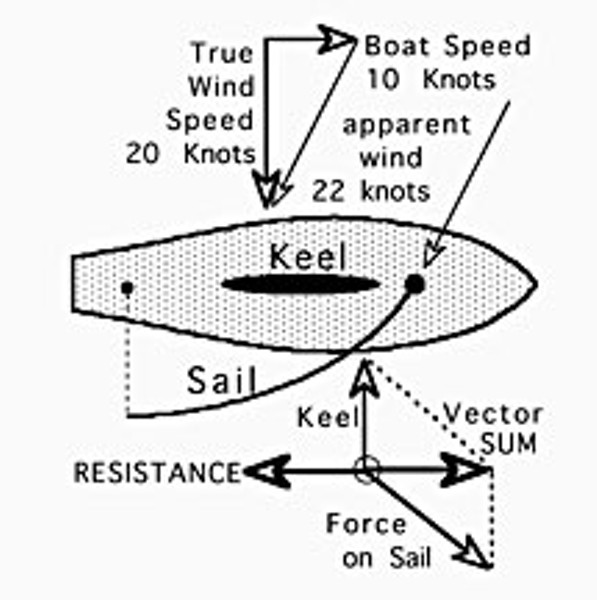 The vector-sum of forces on sail and keel is balanced by the resistance of moving the boat through water. Diagram by Don Garlick.

The length of the yacht is important. Diagram by Don Garlick.

Speed is a function of the boat's angle to the wind. Diagram by Don Garlick.

The physics of sailing is outlined in the first diagram, showing the equilibrium between forces. The vector-sum of forces on sail and keel is balanced by the resistance of moving the boat through water.

The speed of a typical 10-meter yacht in winds of 10 and 20 knots, as a function of its angle to the wind, is shown in the second diagram (1 knot = 1.15 mph and 1 mile = 1.6 km). As shown in the third diagram, the length of the yacht is important because the speed of the induced bow wave varies with the wave's length. It is difficult for a boat to exceed the speed of a wave whose wavelength is longer than the boat, because the boat is then attempting to climb up the wave. With sufficient power, however, a speed-boat can ride up upon its bow wave and effectively hydroplane.

Although the maximum speed of a typical yacht is less than the wind speed, high-tech catamaran yachts have reached speeds about twice that of the wind. A windsurfer narrowly beat the yachting record this year with a speed of 49 knots (56 mph). The land yacht record is 117 m.p.h. in 30 m.p.h. winds!