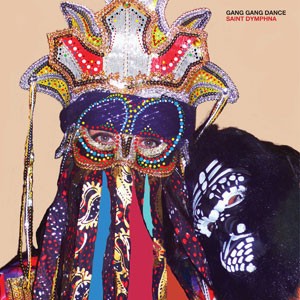 In recent years, New York band Gang Gang Dance has become a creative force in experimental rock, with a sound created by intersection of a wide pastiche of influences. The conceptual bent of their new album seems to be something like a 2008 version of an album like Talking Heads Remain in Light, mixing electronic, world, rock and other elements into a futuristic stew, shaping eclectic taste into a wholly "other" end product. The rugged DIY improvisation of their early material seems to have disappeared almost completely, with faux-techno posturing, grime and other hip genre-mashing taking its place. While these kinds of influences have been cited by the band before, they previously seemed to inform their work in a more hidden fashion, peaking through the bands bizarre compositions in ghost-like ways that were indirect and a big part of what made them so disorienting and interesting. Now they've pushed these influences to the forefront, and it doesn't always mesh well within the context of their sound.

There are high points: The album's openers, "Bebey" and "First Communion," are incredible, the former a transfixing bit of swirling and stuttering electronics overlapped with world rhythms and a guitar line that almost sounds like a distorted mbira (perhaps indicating a Francis Bebey title reference). The latter is probably their single best track to date, a mammoth piece of futuristic dance punk throbbing with emotion from Lizzi Bougatsos' Kate Bush-esque howls and yelps. "Desert Storm" is another nice moment of stuttering post-punk that shimmers with hypnotic guitar/synth-string interaction.

But even with plenty of interesting moments, on the whole it's a very uneven album, finding the band shifting into far too many gears resulting in too much fragmentation. Their attempts at genre bending end up sounding too hip (the most cringe-enduing being their collaboration with British grime MC Tincy Stryder), as if they're trying too hard to create an art-rock document of fashionable taste. The ironically titled "House Jam" makes use of Timbaland's signature stutter-synth (itself borrowed by Timbaland from trance music), and it seems more like a cash-in than influence.

The album actually poses an interesting question from a critical standpoint: Where does one draw the line between influence and imitation? Is Gang Gang Dance swept up in the spirit of the times or just consciously mixing trendy genres? Overall the production on the album is actually too polished, with a heavy Pro Tools sheen to the finished product that can wear on the ears, doing little to make them stand out from the current batch of iPod-friendly dance rock. Though dodgy overall, the album's high points still keep it an interesting listen.