It makes food taste good, but is it good for you? 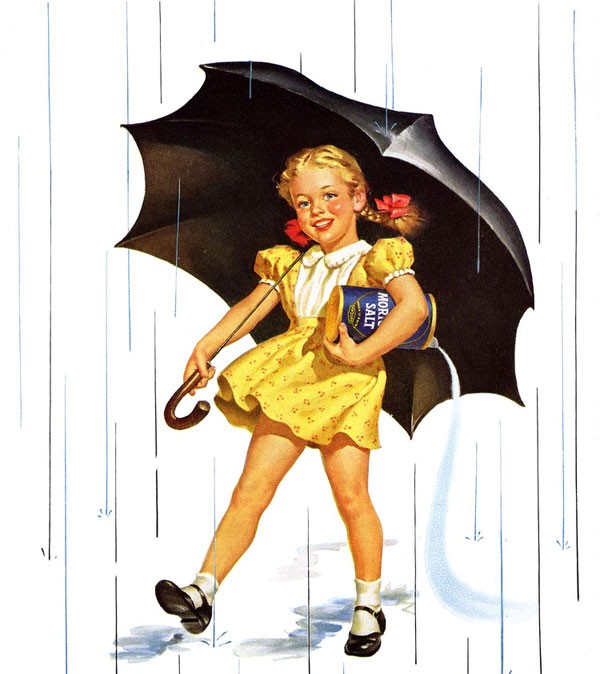 In the late fall of 1967, the brilliant science writer John McPhee challenged Euell Gibbons (author of Stalking The Wild Asparagus) to a foraging trek along the Appalachian Trail. They would eat only wild food at first. After a week, they planned to gradually add elements of civilization: salt, sugar, coffee, cooking oil. Gibbons was by then a legend as an advocate of eating off the land.

But even given the two men's dedication to the venture, the first days were a shock. They were constantly hungry. There were remarkable discoveries, of course: a just-shot coot, freshwater clams, wild mushrooms, watercress -- but each in isolation. After six cold and miserable days, they bought a box of salt:

Dinner revived me. Gibbons had found some catnip, and he made catnip tea. We built a high bonfire that whipped in the wind. The dandelions, boiled in three waters, were much better than they had been the night before, and the oyster mushrooms might have been taken from a banquet for the Olympian gods. Each mushroom was at least six inches across and, in the center, nearly an inch thick. As they steamed, the vapor from the pot did seem to carry the essences of oyster stew. Their taste, however, was fantastically like the taste of broiled steak.

The simple ingredients of that dinner -- dandelions and mushrooms -- were splendid in themselves, but they were made transcendent by the presence of salt.

One might suppose that salt has been part of the human diet since we were hunting mammoths in the Ice Age, but in fact, salt has been an additive to food for less than 5,000 years. For five million years our ancestors ate a diet to which no salt was added. This was the diet of all mammals, one to which they were thoroughly adapted. Like other mammals, humans relied on the amount of salt occurring naturally in food to provide chloride and sodium, and to regulate the amount of fluid in the body.

In Salt, Diet and Health: Neptune's Poisoned Chalice, Graham MacGregor says that with the rise of large communities, and the use and need for salt as a preservative, we became addicted to it. It was the central item of trade, the economic foundation of empires, and a means for governments to control their people (and tax them). It became embedded in cultural, political, and religious institutions. The symbolic significance of salt runs deep in the traditions of monotheism. The covenant between God and the Hebrews was ritually celebrated with salt:

All the holy offerings which the children of Israel offer unto the Lord, I have given thee, and thy sons and thy daughters with thee, by a statute for ever: it is a covenant of salt for ever before the Lord... Numbers 18:19>Thou shalt not suffer the salt of the covenant of thy God to be lacking from thy meat offering: with all thine offerings thou shalt offer salt... Leviticus 2:13

Salt is one of the few flavors we taste only in the mouth, not combined with the nose. It enhances other tastes. Sweets taste sweeter. Naturally bitter foods like chocolate and broccoli become delicious. But precisely because we are attracted to salt, commercial, prepared, and fast foods are loaded with it. They pretty must have to be to compete. You've doubtless noticed that "low salt" products cost more? Why is that? Salt is cheap; making special "low-salt" versions is expensive, and it complicates marketing.

Over 5,000 years, we have become accustomed to 10 to 20 times the amount of salt found in a "natural" diet (the latter figure, it must be said, is found chiefly in processed and fast-foods), and concomitantly we have developed higher blood pressure, which damages arteries and is the major cause of stroke and heart attack. In fact, these are the most common cause of death in the world.

A great many middle and low-income families rely heavily on prepared foods as labor-saving alternatives to cooking supper from scratch. A harried spouse, picking up a pizza for the family, is in no position to police the salt in their meal. Since the statistics on salt consumption and vascular disease are clear, it makes sense that it should be considered a matter of public health.

Which brings us to the crux of this column. Michael Bloomberg, mayor of New York City -- one of the handful of "clean" politicians to achieve such high office -- has decreed a Crusade Against Salt, following successful campaigns against smoking, trans fats and soft drinks. San Francisco is seriously considering the same kind of policy.

Bloomberg has, according to the New York Times, "become New York City's nutritional nag." And they accuse him of hypocrisy: "He devours burnt bacon and peanut butter sandwiches. He has a weakness for hot dogs, cheeseburgers and fried chicken, washing them down with a glass of Merlot. And his snack of choice? Cheez-Its."

I claim no exemption from salt addiction myself. As a cook, I must constantly adjust my recipes to reduce the amount of salt I personally think is salutary. This is true of many excellent chefs. Why? They want their creations to be universally accepted, and withholding salt can mean fewer happy customers.

Our task, then, would seem to be to reduce our unconscious consumption, in favor of becoming aware: salting judiciously rather than indiscriminately. And if that means laws that limit the salt in commercial foods, that may be a good thing.

Is there a middle ground? I think there is. First, let us appreciate the pure visceral delight salt can bring. Julia Child used to warn about over-salting food, but she was also one of the early advocates of sea salt, which delivers more taste, and she loved to dip a moistened finger into a particularly good salt, saying, "Isn't that simply lovely?"

My friend Haute Susanna observes, "I have in the past pooh-poohed the notion of different flavored salts as a yuppie-ish thing. I rarely use salt in cooking, preferring garlic or, depending on what I'm making, vanilla, to enhance the flavors of stews, meats and other dishes. But a friend bought a selection of three salts at Costco last month, sel gris (interesting), pink Himalayan (allegedly, but not much going on there), and cypress flake - wow, that one is amazing on focaccia, eggs -- it's really tasty!!"

So maybe there's a good start. Salt, even "gourmet" salt, isn't that expensive. Taste some, by itself or on bread with sweet butter. Repeat the process until you find something special. Then use your new awareness to salt less but taste more. The generic salt we overload our food with could be replaced by smaller amounts of truly flavorful salt. "Thus reducing salt intake and adding flavor at the same time," Susanna says.

To live healthily, we don't need to return to the salt-free diet of our prehistoric ancestors. Used judiciously, salt can make even the simplest of meals "a banquet for the Olympian gods."