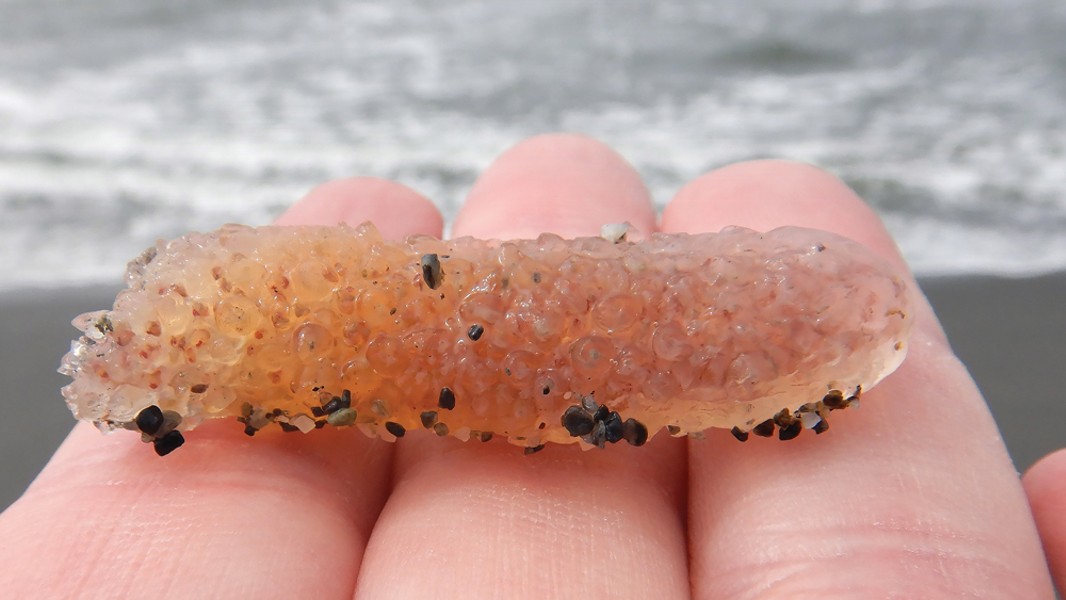 Photo by Mike Kelly A fresh sea pickle at Stone Lagoon in April of 2020.

Photo by Mike Kelly A weathered sea pickle found at Mad River Beach in May of 2017. 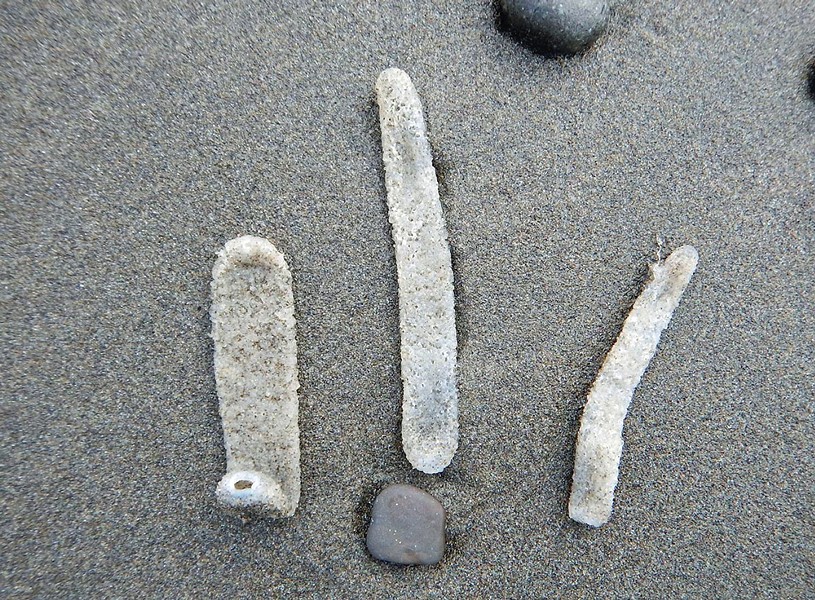 Photo by Mike Kelly A trio of weathered sea pickles on Mad River Beach in May of 2017.

Captain Brunch, the saltiest of our local old salts, agreed to take me on a sea pickle expedition. But first, he sized me up with his one good eye and said, "Aye, lad, do ye have the guts to face the treacherous sea pickle, yar?"

I explained I get a little seasick but wasn't concerned about being harmed by a bumpy, jelly-like, fibrous tube no more than 2 feet long. Even if I fell overboard, I could out-swim any sea pickle (Pyrosoma atlanticum) because they only move about 2 inches per second.

Captain Brunch kicked a barrel of Champagne with his one good foot and said, "That sounds like book learnin', lad. If ye swim away from one, there's sure to be others lurking in the direction ye swim! They travel in vast shoals of torment!"

I said, "I appreciate the maritime tradition of being obsessed with a mortal enemy amongst the ocean's fauna, but a sea pickle isn't exactly a leviathan that smites entire whaling crews."

"Bah! Captain Ahab was a pussy! He had but ONE mortal enemy. I have MILLIONS."

Captain Brunch swept his one good hand across the horizon to indicate the enormous armies of sea pickles that can form when environmental conditions favor them. Indeed, waters off the northwest coast of the U.S. experienced a massive and unexpected bloom of sea pickles in 2017. Scientists think this was associated with unusually warm near-shore water but that doesn't fully explain it. Explosions of sea pickles, the captain explained, made it impossible to catch fish because "nets and hooks alike are fouled by the teeming bastards!"

I said, "I first found them washed up here in 2017, and scattered ones this year and last — not enough to be hazardous. But book learning taught me that their high densities at sea could believably interfere with fishing. They surely can't cause a person bodily harm though ... Did sea pickles take your leg and eye and everything?"

"Nay, lad, this is cosmetic surgery. But be warned! The sea pickle will transfix ye with its fire and lure ye to Davy Jones' locker!"

He may have a point. Sea pickles are called Pyrosoma, which means "fire body" in Greek, and they produce blue-green light. Each sea pickle is actually a colony of many individual tunicate animals known as zooids, which each produce a little bioluminescence, adding up to a glowing sea surface.

We sailed with a late breakfast of eggs Benedict and mimosas, while he spun yarns of fishless horror. For example, he described night visits to his cabin as sea pickles chanted, "No lox for your bagels!" For emphasis, he harpooned a Belgian waffle with his one good tooth and cocked his good ear to enjoy my shrieks.

But I countered with calm facts. I said, "At night, sea pickles migrate to the surface from as deep as 2,500 feet. As they move through the water column, each tiny zooid filter feeds on plankton by pumping water through its mouth and into the tube. Water from many zooids exits the tube at the open end, which creates the jet propulsion. But they can't rocket onto a boat."

Then I unwisely suggested the captain suffered irrational fears and should perhaps seek counseling.

Shaking with rage, Captain Brunch saluted me with his one good middle finger and shouted, "I order ye to walk the plank! And after ye scrape these dishes into the sea — being careful not to get any yogurt parfait on the plank — go to the galley and wash them! There's dish soap under the sink, yar."