Samba to the rescue 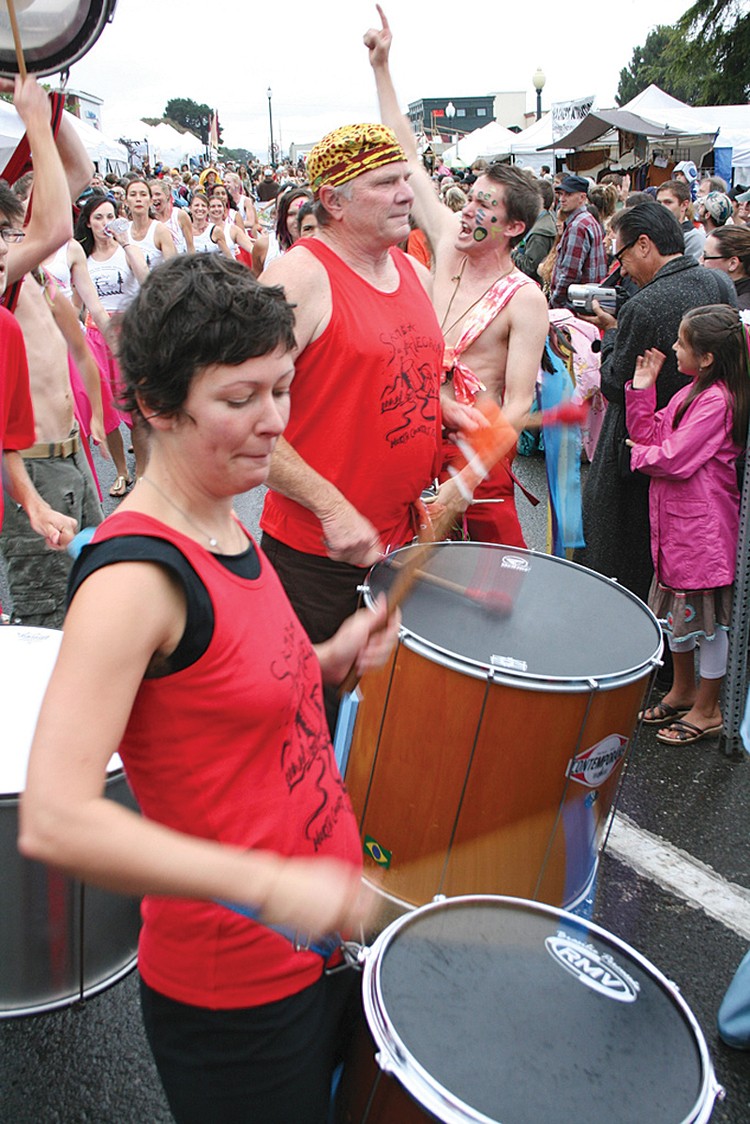 An ugliness struck our dear, fun-loving, free-flowing Arcata late last year, nearly stopping the happy beating of its heart, the downtown plaza. But now some of the city's more rhythmically proficient residents want to revive that heart -- with drums and dancing.

It's samba to the rescue.

The problems began on Halloween, when a 3,000-strong horde of revelers-gone-bonko shredded the hell out of the Arcata Plaza's planters and lawn, broke bottles and nearby windows and spray painted the bronze statue of William McKinley, a controversial work of art -- but art, nonetheless -- that has stood in the center of the plaza since 1906. There also were reports of random needle-jabbings of strangers in the crowd, people peeing from the top of McKinley, and other out-of-control drunkenness.

Then, on New Year's Eve ... nothing much happened -- except for the arrest of one samba drummer. In answer to the costly disaster that was Halloween -- $8,600 or more in repairs -- the City of Arcata had fenced off the Plaza earlier in the day and then posted a second fence of living, armed bodies -- police personnel dispatched from six jurisdictions, including from Rio Dell, Humboldt State University and the county District Attorney's office. That effort cost roughly $7,000.

Neither outcome -- nasty chaos or cop-presence overkill -- seemed tenable for future impromptu holiday celebrations. So the city, which had held a what-do-we-do meeting in November, hosted another one on Jan. 24, with official mediators, and invited everyone to attend. Of the roughly 50 in attendance, about half turned out to be samba drummers and dancers -- members of a thriving, embedded culture in Arcata and Humboldt County consisting of at least five distinct groups, each with a different approach to samba. The samba contingent had met before the mediated session to work out a unified message.

Why such interest from our favorite public boogiers? Because of that arrested drummer -- who did not immediately stop drumming when an officer asked him to, and then struggled when the officer reached for his drum.

"When I saw a photo of one of the drummers getting arrested, I thought, ‘Oh no, here we go again,'" said David Peñalosa, who founded the North Country Fair Samba Parade in 1986 (it started out as the All Species Parade, but soon the samba portion split off and became its own thing).

In the 1990s, Peñalosa said, a random event put a damper on drumming on the Plaza.

"When Jerry Garcia died, the Deadheads didn't have a place to go," said Peñalosa. "So they went to the Hog Farm Festival and Reggae on River. But there was a week in between the two festivals, and so thousands of Deadhead travelers were parked on the Plaza in Arcata ... . And they just drummed in the Plaza -- not really a rhythm, just pounding their drums. Boom boom boom boom. It was such an unmindful thing that they did, that it prompted the City of Arcata to tighten the ordinances."

The result was "the bongo ordinance" -- officially called "The "Downtown Plaza Area Noise Ordinance" (section 4300 of Arcata's municipal code). Among other things, it prohibits "any noise which is loud, boisterous, irritating, penetrating, repetitive, rhythmic or unusual, or that is unreasonably distracting in any other manner, such that it is likely to disturb people of ordinary sensitivity in the vicinity of such noise." It sets specific limits on decibel levels depending on the time of day.

In spite of it, samba groups have proliferated in Arcata, performing in a number of events with no incident -- until last New Year's Eve. In light of that, and the Halloween chaos preceding it, some samba drummers feared the rules for drumming on the Plaza were now going to get even tougher.

The group that met before the mediated city meeting drafted a proposal asking the city to amend its noise ordinance by extending the times in which drummers can play on the Plaza on weekends and holidays such as Halloween, New Year's Eve and Fourth of July. The proposal also said that the group wanted to volunteer to organize and clean up after such events.

At the meeting last week, samba members also said they could be used to control the chaos at big events. Peñalosa suggested that a samba troupe could surround the McKinley statue and flower planters in a wall of musical protection. But others said that wouldn't work because the statue would block eye contact between samba players and their leader.

Samba participant Robin Paschall offered to help create a festival, and many liked the idea of an event similar to the North Country Fair or the I-Block party, with controlled access to the Plaza, no outside alcohol, and venues spread about the space. Samba troupes could even be used to lead people from venue to venue.

In the end, the attendees agreed to form two subcommittees: one to pursue solutions for events like Halloween and New Year's, and another to look into improving Arcata's nightlife options for all ages. So, many meetings lie ahead; Paschall has scheduled the first followup for 7 p.m. Feb. 6 at the Arcata Playhouse.

"I've heard that the police appreciate samba because it gives drunks a focus, so we have happy drunks," Peñalosa said. "It gets everybody dancing. The rhythmic principles are very old; they go back to Africa. They're tried and true."

The arrest of the drummer on New Year's, it turns out, was an isolated event. "There have been occasions when we've asked samba drummers to stop playing, and they've been cooperative," Arcata Police Chief Tom Chapman said. "The samba community has never been a hindrance or uncooperative. I thought it was really cool that they were able to organize and come forward with ideas and ways to improve the situation. ... I've always viewed them as a positive influence."

Chapman said samba could very well be part of the solution for controlling chaos on the Plaza, but not the entire solution. Samba players agree.

Jesse Jonathon, the musical director of Samba da Alegria and of the private group SambAmore, said the local samba groups want "to bring light and focus to what could otherwise be a really dark, drunken space."

"I'm saying, fence everything off you want protected, and set us free," Jonathon said. "If the issue is safety -- shine some light on this space, and put some formal police presence there, but not a police state. Maybe we've got a couple of cops in the drum line with us, cruising around. Maybe the punks will go somewhere else that night."