Try your hand at hand pies 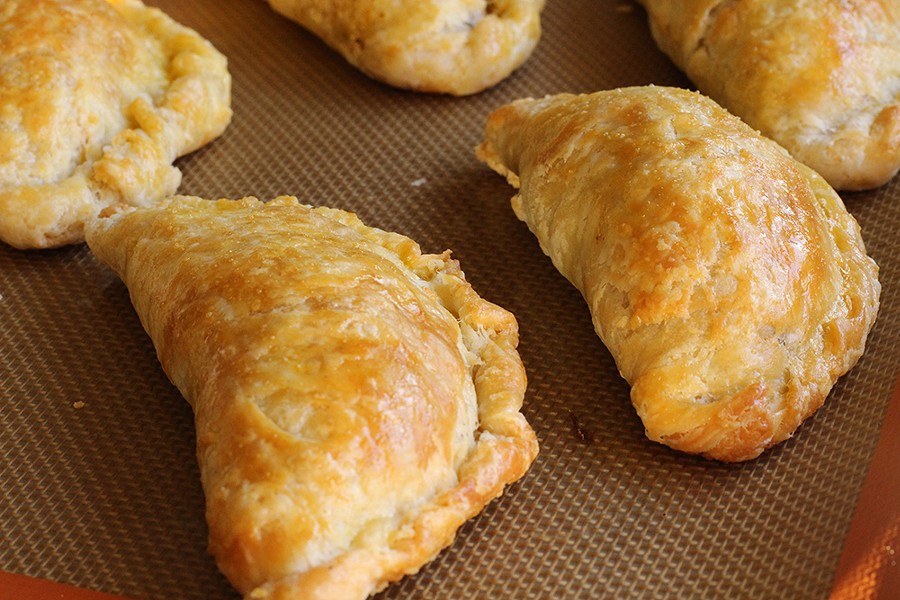 Empanadas are a staple for many Latinos. Whether sweet or savory, baked or fried, the little hand pies are a treat. When I was growing up, my momma baked us sweet empanadas, and her empanadas de calabaza (pumpkin) were my favorite.

As an adult, it's the savory empanadas that lure me in: tender, flaky bread stuffed with scrumptious fillings like picadillo — seasoned ground beef with briny olives and golden raisins — or cheesy spinach with meaty mushrooms or even spicy chorizo and potato. They are mighty fine alone but gorgeous when served with a side of chimichurri dipping sauce (see my June 16, 2016 "Chimichurri in a Hurry").

If you bake, I recommend you put savory empanadas in your repertoire. The dough is basically a pie crust and super easy if you use a food processor. The fillings are versatile and really up to your imagination.

The one caveat with making your own empanadas is that they do take a little time. Allow at least two hours the first time you make them. They aren't difficult but there are many steps involved: making and refrigerating dough, preparing and cooling the fillings, assembly and baking.

I usually make one batch of dough and two fillings. This dough makes empanadas that are more in line with Argentinian-style than the ones found in Mexican panaderías, or bakeries. Bonus: This dough recipe can be used for both savory and sweet empanadas.

If your dough making skills stink, cheat by using prepared phyllo dough, or if you can find them, Goya makes prepared empanada discs.

Make sure the butter and water are chilled. When it comes to dividing dough, a digital food scale is handy but you can also eyeball it. To avoid unnecessarily adding flour, roll out the dough between pieces of parchment paper or plastic wrap (a gallon-size bag cut along the side seams works splendidly).

To make the dough in a food processor: mix the flour and salt, then add the butter by pulsing the mixture a few minutes until the butter makes pea-size clumps.

In a small bowl, whisk the egg, ½ cup water and vinegar together and slowly pulse the liquid into the flour mixture until a dough forms. (If the mixture is dry, add remaining ¼ cup water to help it come together; if it's still dry, add additional water incrementally by the tablespoon.)

Empty contents on the counter and gently form the dough into a ball. For a soft, flaky crust, do not knead or overwork it. Wrap in plastic wrap and refrigerate it for at least 30 minutes or up to two days.

To make the empanada dough by hand: Follow the instructions above but use a pastry cutter, two forks or your hands to mix the ingredients together.

To assemble and bake the empanadas: Have your fillings prepared and cooled before beginning assembly. Remove the chilled dough from the refrigerator.

Add filling in the center of each disc, making sure to keep edges clean (4 level tablespoons for large empanadas; 2 level tablespoons for small ones). Avoid overstuffing the dough so the seams and pastry don't leak or break open. Dip your finger in water and run along the clean edge of the dough. Fold the dough over to cover the filling and make a half moon shape. Pinch the edges together and seal tightly by gently crimping them with a fork or braiding the edges.

Brush tops with egg wash and bake at 400 degrees for 20 to 23 minutes until golden on top and bottom. Eat them warm or at room temperature.

Makes filling for a half batch: 8 large empanadas/12 small empanadas.

In a large skillet over medium heat, lightly brown the ground beef. Drain the excess grease and add the onions and spices. Adjust seasoning to taste, then add the olives and raisins (and chili if using). Set aside and let cool completely off the stove.

Makes filling for a half batch: 8 large empanadas/12 small empanadas.

In a large skillet over medium heat, sauté the onions for 2 to 3 minutes, then add the mushrooms, cooking a few minutes until the mushrooms become tender. Add the seasonings and spinach; cook until the spinach wilts and nearly all the moisture cooks off. Turn off heat. When the mixture is cooled, add nutmeg and fold in cheeses. Adjust seasoning. Set aside in a cool place.