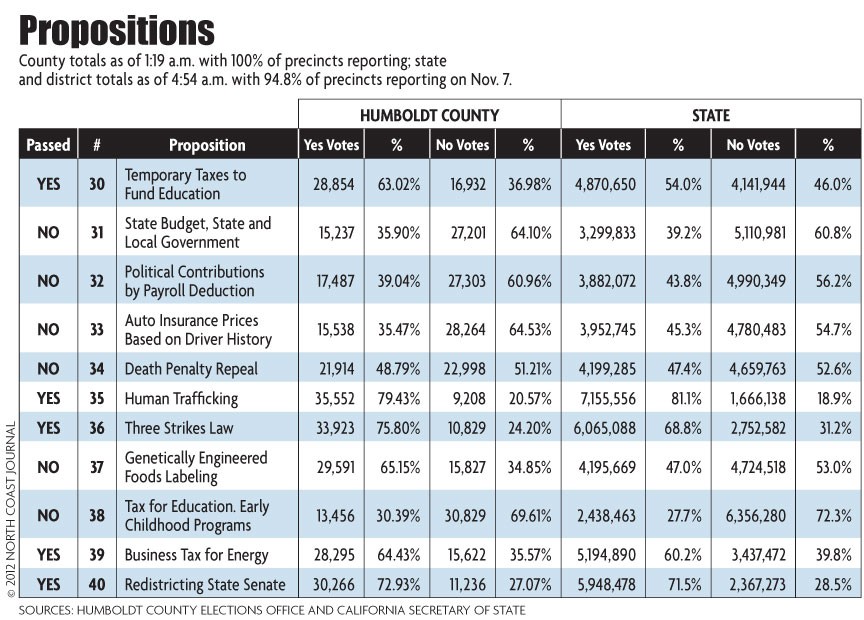 The governor can put away his bundle of knives now: The voters have passed Proposition 30. Across the golden state, school officials are heaving great, complicated sighs of relief.

As of 5:25 a.m. Wednesday, the measure crafted by Gov. Jerry Brown and supported by the two major teachers unions had captured 54 percent of the votes. And that means the governor's threatened $6 billion in "trigger cuts" from the 2012-13 state budget -- cuts that would have been triggered by rejection of Prop. 30, that is -- will not take place. Most of the cut would have come out of the state general fund account reserved for schools, but about $600 million of it would have come out of state funds allocated to fire and water safety, law enforcement, parks and natural resource services.

Prop. 30 changes the California constitution to raise personal income tax rates by between 1 and 3 percent on incomes above $250,000 for seven years. And it raises the sales tax rate by a quarter cent per dollar for four years. (So, maybe some of the high-income folks aren't celebrating, especially since the tax rate increase is retroactive to January 2012. And maybe the anti-more-taxes people are chafing at the state getting more tax money instead of, as they see it, being forced into better money management.)

Most of the roughly $6 billion a year to be generated by these tax increases will be used to begin paying back some of the money the governor has borrowed for years from a schools-specific account. The proposition also guarantees continued state funding to counties to pay for certain state programs that were handed off to local governments recently -- including handling low-level offenders as part of prison realignment.

Instead, some of our local institutions can look for a slight slowdown in the amount the state plucks each year from that school-specific revenues account. But Prop. 30's not a complete fix.

Last week, as the election neared and Prop. 30 wobbled in the polls, Humboldt County Superintendent of Schools Garry Eagles said if the measure passed he would, of course, be taking a deep breath to say, "Thank goodness the cuts aren't going to be any deeper." He might, he said, even celebrate post-election with an extra martini, knowing he won't have to lay off anyone because of budget concerns and that some of his districts -- such as Northern Humboldt Union High School District -- won't have to trim the school year by five days next year as they'd been preparing to do if the measure failed.

"But I know the system isn't perfect, either," Eagles said. "The bill doesn't go far enough."

Prop. 30 monies will barely begin to mitigate for the roughly $100 million by which the state has underfunded Humboldt County schools in the past five years, either by delaying guaranteed payments or flat-out withholding money to use for other purposes, Eagles said.

At Humboldt State University, meanwhile, staff is preparing to roll back the 9.1 percent tuition increase implemented earlier this year. A happy, but not necessarily easy, task.

"The logistics of something like that is frankly boggling," said Robert Snyder, vice president of academic affairs, last week. "We will have to issue credit or refund checks. We will have to recalculate financial packages."

Students will each be credited or refunded $249. Some might have their financial aid packages reconfigured.

California State University Chancellor Charles B. Reed, in the meantime, has announced that across the system enrollments might rise a bit next fall, as university staff begins reviewing applications that had been put on hold until after the election. (Fewer students would be accepted had Prop. 30 failed.)

At College of the Redwoods, officials are expecting passage of Prop. 30 to bring in an extra $222,720, said Vice President Lee Lindsey. The state also will pay the college $1 million of the $5 million it owes in late and deferred funding. And CR will be able to raise its enrollment cap by 49 full-time equivalent students.