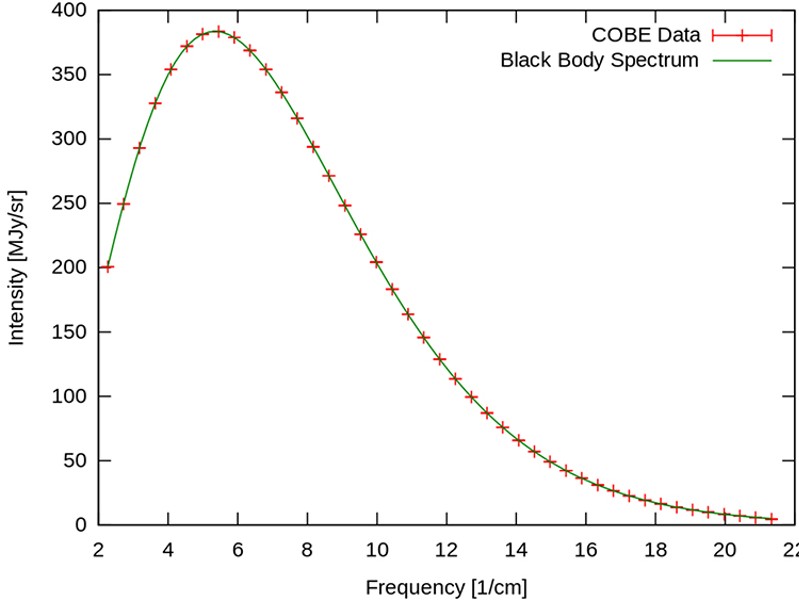 NASA Planck's Law predicts the green curve for a black body at 2.73 degrees above absolute zero. The red crosses show the observed radiation from the very early universe.

It was of course the throwaway "bitches" that got all the attention and that probably had Randall Monroe, creator of the cult comic strip xkcd, ROFL. Back in the early days of xkcd — No. 54, published in 2006 — Monroe's strip showed a smooth up-and-down curve with its accompanying algebraic formula, followed by "Science. It works, bitches." Turns out, Dawkins is one of xkcd's many fans. (Monroe, a physicist by training, once worked for NASA.)

So what's the curve and why the over-the-top paean to science? The short answer is seen in the accompanying graphic, where the red crosses match the green curve. The green curve represents the theoretical "black-body spectrum," as derived from Max Planck's 1901 equation, the one shown in the xkcd strip, while the red crosses are data from observations made 90 years later, by NASA's COBE orbiting satellite, of the cosmic microwave background radiation (CMB) from the very early universe. That is, the scientifically derived theory predicted the much later empirical evidence. Perfectly.

German physicist and Nobel laureate Max Planck didn't know anything about the CMB when he was working on his theory of black-body radiation. (CMB was only predicted in 1948 and discovered 16 years later.) Without going into too much detail, a theoretical black-body is one in equilibrium with its environment, and Planck showed that its spectrum — the one in the curve — depends only on the body's temperature. The x-axis of the curve represents the radiation's frequency (1/wavelength), the y-axis the energy at that frequency.

Turns out that 380,000 years after the Big Bang (neither big nor a bang), the universe — a perfect black body then — had cooled just enough for photons (i.e. light) to "decouple" from what, until then, had been a blindingly opaque plasma cloud. It's those photons, after traveling for some 13.8 billion years, that constitute the CMB. When they started their long journey, they were really, really energetic — that is, hot. Since then, they've "red-shifted" down — that is, they've cooled as their wavelength increased due to the expansion of space. Now, their temperature is just a fraction above absolute zero (0 degrees Kelvin), the coldest temperature possible. How much of a fraction? Well, 2.73 degrees Kelvin. And that's what the COBE satellite was measuring, the energy at various wavelengths of 13.8 billion-year-old photons from the very early universe.

Since the curve derived by Planck depends only on temperature, all you have to do is plug in 2.73 degrees and compare it with COBE's observations — and see how wonderfully they match. And, if you're anything like me, be gobsmacked by it all.