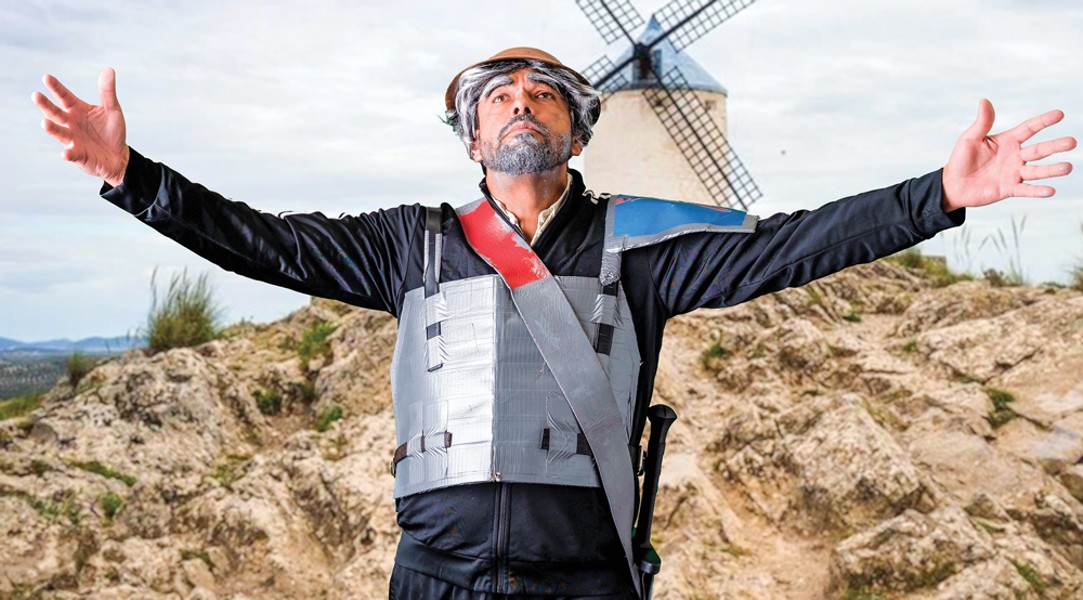 If you come to Man of La Mancha knowing nothing more than it was a Broadway hit and Tony winner that spawned the hit song and eventual standard "The Impossible Dream," you're not alone. I myself preferred Roberta Flack's version to the one Jim Nabors sung on Gomer Pyle. There is considerably more to it than that one rousing tune (for which you'll find great lyrical context in the play), including its roots in a great classic of 20th century literature.

Man of La Mancha had its modern-day beginnings oddly enough in a non-musical production on CBS's DuPont Show of the Month in the late 1950s. was a play-within-a-play concept based on Miguel de Cervantes and his legendary 17th-century novel Don Quixote. From that rather interesting idea things evolved into the musical that debuted in 1965. It's a good pick for Ferndale Repertory Theatre as it gets sharply back on track — yet again — following pandemic shutdowns.

But whether or not you're a fan of Don Quixote, the play speaks for itself here as a memorable and kind of weird work, albeit one whose music and lyrics don't all fully stand the test of several decades. It may not really be anyone's favorite musical, but FRT's production has some scrappy pluck and great little technical touches under the talented direction of Billy Higgins.

Just know that it's the 16th century during the Spanish Inquisition and failed poet turned failed tax collector Miguel de Cervantes (Jaison Chand) has been tossed into prison, along with manservant and hype man Sancho Panza (Rigel Alexander Schmidt). The prisoners are not welcoming to this middle class pair or Cervantes' possessions in their midst. However, in a scrap over the matter of what he carries in his trunk, Cervantes strikes a deal with an eccentric prisoner who calls himself the Governor (Charles Young) that they hold something of a trial with the prisoners as a jury.

This is agreed upon by all and what ensues shows the poet at heart that is Cervantes: This trial will be a play with the prisoners each assuming the roles of multiple characters, all of which flow from the mind (and under creative control) of the poet and defendant. In this world, the protagonist eventually becomes the mad knight Don Quixote, with Sancho at his side, and fellow prisoners become the denizens of a Spanish inn and much more, all spun from Cervantes' clever mind.

Explaining it beyond that isn't of much value; this is meant to be absorbed and enjoyed, both by the prisoner players, who also act as the audience. This is a tale of a knight and chivalry, after all, and one with some great numbers like "Golden Helmet of Mambrino" and "I Like Him," alongside a few more forgettable ones. Central to nearly all of this is Cervantes/Quixote's romantic pursuit of hard-bitten inn worker Aldonza (Liz Whittemore), whom he christens Dulcinea. It is this part of the plot that works best thanks to what Chand, a great Ferndale vet so memorable in Beauty and the Beast and Whittemore, a great presence with an outstanding voice, bring to their roles.

Among the rest of the cast, Young is quite good, as are Schmidt and Evan Needham, both so prolific in local theater in recent years that it's more of a matter of what they ain't in than what they are. La Mancha's remarkable set design and costumes come from the great Jane Hill and Rachel Tibbetts, and the crucial choreography throughout is executed with nimble aplomb by Molly Severdia and Caroline McFarland.

Man of La Mancha inhabits a complex but clear dreamlike reality in which people assume as many as three identities. That imagination and shapeshifting can be a strength in the face of the world's darker shadows. "Evil wears a thick armor," the innkeeper tells Knight Quixote in the second act. It does indeed, so we go into battle accordingly.

David Jervis (he/him) is an Arcata-based freelance writer and editor.

It's not Shakespeare, much to the chagrin of two struggling brothers trying to stage a winner during the Bard's heyday. The School of Dance, Music and Theatre at Cal Poly Humboldt presents the 1590s comedy Something Rotten! at the Van Duzer Theater March 25 through April 3. Visit www.theatre.humboldt.edu.