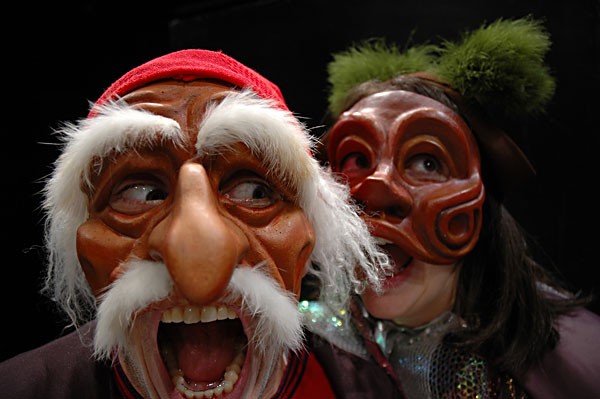 What did Christmas mean to Charles Dickens? Singing, dancing, feasting, games, good works and, for some reason, ghosts. He wrote at least 10 ghost stories involving Christmastime, the most famous being A Christmas Carol. Given commedia's attraction to the grotesque, these Christmas ghosts would seem a natural focus for this year's holiday show from Dell'Arte, A Commedia Christmas Carol. And so they are.

Directed by Michael Field, the Dell'Arte Company mostly sticks to the Dickens story, incorporating actual speeches from the original. But it wouldn't be Dell'Arte if they didn't provide comedic and satirical twists. Scrooge (played by an energetic Gabriel McKinney) is almost a classic commedia character (the miser) but there's a daring difference to Tiny Tim (played by Adriana Chavez): He's no longer a 19th century malnourished and crippled child but afflicted with the 21st century American childhood scourges of obesity and asthma. Scrooge's nephew (Brian Kuwabara) and niece (Nicholette Routhier) are sweet and spoiled Yuppies. The contemporary fetish for competitive Christmas displays is mocked, as one man promises to let homeless people sleep in his barn if they agree to dress up as sheep for his Nativity scene.

But it's the creative characterizations of the ghosts that enliven the classic laughs. Christmas Past (Emily Windler) is a literal-minded dimwit, and Christmas Present (Elizabeth Colon Nelson) is a sexy Latina. Christmas Future (Erin Crites) doesn't speak in the Dickens story, so naturally she's a mime in classic Marcel Marceau costume, although with extra equipment she points out.

There seemed less music than usual, but a nice balance of physical and verbal humor. For me, this was the funniest of the Dell'Arte Christmas shows I've seen.

As for true Dickens, a couple of caveats: Scrooge's transformation at the end is meant to be a complete liberation of inner joy and love. The Dell'Arte version is more ironic -- they make comedic hay from his reversions to type and struggle to change. That's probably more realistic and certainly funnier, but it blunts Dickens' main move.

Neither local production really did justice to one of the scarier scenes, when Christmas Present reveals two children: "This boy is Ignorance. This girl is Want. Beware them both...but most of all beware this boy, for on his brow I see that written which is Doom, unless the writing be erased..."

The multiple-character cast members are uniformly funny (not yet named are Julie Douglas and Genesee Spridco), and several designed the terrific masks, along with Heidi Rider. Tim Gray did the music and the very effective sound cues, Jerry Lee Wallace the scenic design, Michael Foster the lighting, Lydia Foreman the costumes.

Dell'Arte's A Commedia Christmas Carol will be at Trinity Valley Elementary Wednesday (Dec. 2), and after several dates in Oregon, goes to Orick (Dec. 7), McKinleyville High (Dec. 8,) Scotia (Dec. 10), Point Arena (Dec. 13) and the Mateel Community Center on Dec. 15, before returning to the Carlo, Dec. 17-20. Most are free shows, and the Carlo weekend is pay-what-you-will.

Scrooge was a rich man who learned nobility and empathy for the poor. Oliver Twist, the hero of just the second novel in Dickens' long career, was himself a poor boy with a noble heart, with the choice of being worked to death or preying on the rich to survive, before fate and kind-hearted people intervene.

The 1960s hit musical Oliver! simplifies the story, and despite the extremes of mid-19th century London, capitalizes on colorful characters and the picturesque. Since it emphasizes the heartwarming morality tale as well as colorful Dickensian characters, and especially because it presents children on stage, this family-friendly musical now at Ferndale Repertory Theatre fits into this Dickens of a Christmas season on the North Coast.

Oliver!, with music, lyrics and book by Lionel Bart, is directed by Tom Phillips, with musical direction by Laura Welch, vocal direction by David Powell and Nanette Voss, and choreography by Linda Maxwell. Scenic design is by Elizabeth Uhazy, lighting by Nick Trotter, sound by Dylan Savage and Ian Shatz.

Then there's the annual North Coast Dance production of The Nutcracker, performed Dec. 11-16 at the Arkley Center.