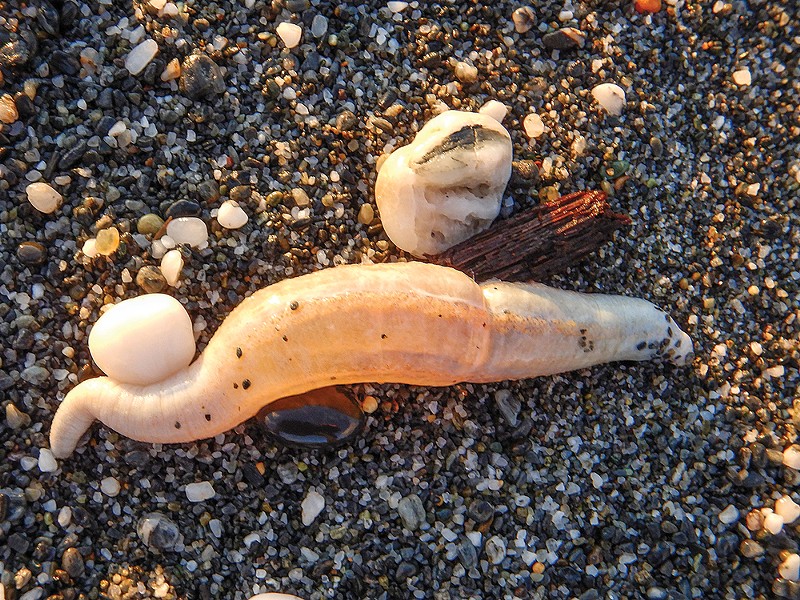 The DJ said, "It's the top of the goddam hour and you're listening to sea cucumber radio. Nothing but rock! Request lines are open."

"Yes and yes. We are the country's only station owned and operated by rat-tailed fusiform sea cucumbers. I'm a proud Paracaudina chilensis but the goddam Deep State FCC won't grant broadcast licenses to invertebrates. So, we are a pirate station and can say any goddam thing we want. We are not worms!"

"No one mentioned worms," I said. "But sometimes a bunch of you guys wash up on the beach during big surf. Admittedly, I first thought you were worms with long skinny tails and fatter cylindrical front ends. But I noticed five rows of tiny tubercles on your sides, and five is a sign of pentaradial symmetry, which indicates you are an echinoderm —related to sea stars and urchins — so I knew you were sea cucumbers."

"You protest too much. Most animals make their sounds from the same hole they breathe through. And sea cucumbers have a 'water lung' or 'respiratory tree' connected inside the anus. You breathe through your ass, so I assume you speak from there, too."

"But I don't have a goddam parasitic fish living up my ass!" said the DJ.

"I didn't say anything about ass fish. But some species of large tropical sea cucumbers host pearlfish up there. And you are correct that a small, temperate-zone species like you would not suffer that affliction."

"You're goddam right. And I don't eat shit!"

"OK," I said. "But sea cucumbers are among the most common seafloor animals and you play a crucial role in nutrient cycling. Organisms up the chain produce particles of organic material as they break down their food. Fortunately for the whole planet, sea cucumbers further reduce the particles so they are small enough for bacteria to further reduce them into constituent inorganic molecules. Thanks to you, these molecules become available again to make more life. But I'm afraid the detritus you consume contains a high percentage of excrement."

"Well, you can eat my shit, you goddam Deep State shill," said the DJ. "And I don't spew my guts!"

"Who said anything about spewing guts? However, this is a defensive strategy used by many sea cucumbers. When threatened, they eject some of their internal organs through their anus, which entangles an enemy in sticky goo. Then they regenerate a new set of guts. I don't know about you, but when I've found your pals laying on the beach, they may have heroically spewed some guts."

"I didn't say lazy. I mean, your species digs U-shaped burrows with your anus sticking out of one end, and your mouth at the other end where your feeding tentacles can dab up food particles. Your work plays an important role in mixing and stabilizing the substrate — making the seafloor better habitat for other organisms. But I'm curious; why a rock 'n' roll format?"

"It's cultural. Many sea cucumbers proudly reside down the front of rock stars' trousers."

I said, "You must be confusing sea cucumbers with the agricultural produce called 'cucumber,' which isn't soft and squishy like you."

"I knew it. We're being replaced by goddam Deep State vegetables!" said the DJ before he hung up without taking my request.

So, I started a file on him for my Deep State overlords.