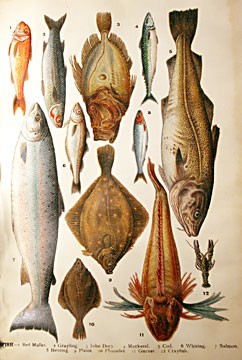 Fish has always had one problem in American cuisine: Americans don't much like it, except battered and fried. Prior to the Age Of Sushi, you pretty much had to go to a fish restaurant to get anything except fish and chips. Not counting shrimp, which we adore (the longest lines in Vegas buffets are for prawns). Or lobster (the least flavorful of North American shellfish, but with a high snob value, thus "Surf 'n' Turf"). And crab (which we often overpower with tomato, as in "Cioppino," or drench in mayonnaise, as "Louis"). But traditionally, we just don't much care for fish.

Not entirely without reason. Fish is fragile. It goes from delicate to disgusting way too easy. Anyway, historically we've gone from don't get it, can't stand it to fished out, can't find it and don't much care. Americans eat meat.

Shortly after reaching Massachusetts Bay in 1630, Governor John Winthrop took a small boat to sea. Two hours later he returned with "67 coddfishe most of them very great fishe some 1 yard and 1/2 longe." Cod was central to the discovery, colonization and settlement of the Americas. Well before Columbus, 10th-century Vikings discovered Newfoundland when they probed westward, fishing for cod. Later, the fish became essential to slavery — the best dried cod was exchanged in Europe for goods to be traded for humans in Africa, while lower grades, still highly nutritious, were sold to feed West Indian plantation slaves.

While the Northeastern Indians had made considerable use of fish (mostly in stews or soups), the Pilgrims were slow to follow their example. Governor Winthrop notwithstanding, they did not care much for fish, except eels. The citizens of Plymouth Colony fed clams and mussels to their hogs, with the explanation that they were "the meanest of God's blessings." New England Clam Chowder wouldn't arrive for two centuries.

When King Charles I, as a gift to his friend Lord Baltimore, carved Maryland out of Virginia, he carefully set the Potomac River as the boundary, not as customary at the "thalweg," or median depth, but at the Virginia high-water mark. This had the effect of giving Maryland the rights to Virginia's fecund oyster beds, launching a series of "oyster wars" over the years. Oysters were popular, fried, baked, made into loaves, soup, scalloped and pickled.

Put salt, whole spice, white wine, and a bunch of sweet herbs into your water; when it boils put in a little vinegar, for that will make the fish crisp; let it boil apace before you put in your fish; let them boil till they swim, then take them up, and drain them; take a little of the liquor, put it into some butter, flour, two or three anchovies, and some capers; set it over the fire, and beat it up thick, then pour it over the fish, with parsley, capers, orange and lemon.

Less affluent families ate fresh and dried fish in soups. Fish chowders were the forerunners of clam chowder (which does not appear in a printed recipe until the 1830s). The chowders made by the early settlers differed from other fish soups because they used salt pork and ship's biscuits (the origin of the custom of crumbled crackers sprinkled on top).

Consumption of fresh seafood declined as the nation spread westward. With the opening of the Erie Canal, oysters and smoked salmon were shipped inland on ice. Fresh fish was too fragile for travel, however, and until the invention of refrigeration most fish consumed west of the Appalachians was pickled. Pickling plants were built on the docks of major Northeastern towns, serving the Atlantic dory-and-schooner fleets that plied the Newfoundland Grand Bank (though most fish was for export).

In the first half of the 19th century, food had been essentially a local matter ‚Äì cuisine was of necessity limited by region and season. But from 1830 to 1860, rail lines grew from fewer than 100 miles to more than 30,000. The Great Lakes provided freshwater sturgeon and pike, and the Gulf Coast provisioned Creole cookery, but fresh seafood could not be had south of Cleveland or Chicago, or north of Baton Rouge, and was virtually unknown in the interior until after the Civil War.

In the coastal states, abundant species such as cod and mackerel were treated as "trash fish." Those varieties least abundant were most prized. Scarcity, rather than any particular fondness, was the reason fresh fish could be found in the kitchens of wealthy homes. There, it would be baked to the point where texture and flavor were indeterminable, blanketed with a rich dressing and decorated like a wedding cake. The "fish course" was often simply an excuse to eat Hollandaise sauce. Sole, bass, salmon, trout — all were pretty much the same dish. The rich did not much care for fish.

Turtle, on the other hand, was a delicacy prized from New York to the Caribbean, its flesh often compared to veal. There are four recipes for turtle soup in The Williamsburg Art of Cookery. As turtles became scarce into the 19th century, turtle soup became an indispensable first course of every important dinner — private or state — so inevitable, that in its absence, the meal commenced with "mock turtle soup."

If scarcity determined the tastes of the upper classes, abundance should have provided for the lower. Indeed, cod chowder was the ration for women working in the textile mills and sardine pickling factories of the Northeast.

But in general, proximity to the ocean had little impact on the working class, who did not much care for fish. Salted meats, potatoes and cabbage prevailed, a diet that grew with waves of Irish and German immigrants. This is reflected in a sobering statistic: The average physical stature, which in the 18th century had achieved close to modern height, began to decline in 1830, continuing for the next 40 years. Not until the advent of canning and modern food distribution would that trend reverse.

Of course, tributaries of the Ohio, Missouri and Mississippi Rivers were abundant with fish, yet there was little attempt at commercial exploitation. Freshwater fishing was a leisure activity, not a job, and while a skilled angler could provide excellent eating for a family (and many poor people took advantage of this, one reason catfish became a staple of Southern cooking), there was a stigma attached.

The Protestant work ethic was uncomfortable with the unhurried pace of recreational fishing — at best a pastime, and a solitary one. ("Trout fishing is best carried out alone," said Thoreau.) It was also the activity, called "playing hooky," of boys who skipped school. ("It was kind of lazy and jolly, laying off comfortable all day, smoking and fishing, and no books nor study," said Huckleberry Finn.) In agricultural lands, irrigation, and later power, caused many inland fisheries to be dammed. Any disadvantages seemed trivial compared to benefits. Americans were meat-eaters, anyway.

Even in the late 19th century, health problems associated with marketing fresh fish were considerable. It was only on the eve of the 20th century that rail distribution and reliable refrigeration meant a Denver hotel or a Kansas City steakhouse might offer salmon, just 24 hours from the sea. When, in 1889, the U.S. Commission on Fish and Fisheries issued its Report on The Pacific Fisheries, it announced a young industry not only capable of providing jobs for thousands of families, but with the potential "to feed the masses with cheap and wholesome food."

Around the same time, a far less optimistic report was issued on the Atlantic commercial fishing industry, where, with the development of refrigeration and transportation technologies, there was a great rush to harvest in unimaginable quantity. Dory-and-schooner fishing practices that hadn't changed for centuries gave way to steamers armed with purse seines and the novel bottom-dragging trawl from Europe. These boomed and busted each of the major fisheries of the time, most of the catch destined for export. The Commission on Fish deplored the industry's short-term greed and lack of foresight in protecting the North Atlantic fisheries:

They believe, or profess to believe, that money and effort spent for food-fish increase are simply money and effort wasted. They fail to comprehend the possibility of checking the decrease and of supplementing it with such an increment as will repopulate and restore productiveness, regarding it as a chimera. They have failed to grasp the idea that such restoration would add millions to the value of the country's resources.

This was a warning that would be repeated over the decades, generally falling on deaf ears. With most seafood exported, first to Europe, then to Asia, there was no particular concern in the U.S. There didn't need to be. There would always be fish enough for those who wanted it bad enough to pay a premium. For the rest, well, Americans didn't really much like fish, anyway.