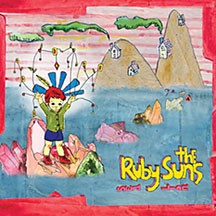 CD by The Ruby Suns

FellowJournal reviewer Spencer Doran remarked on the "Beach Boys-in-an-airplane-hangar vocals" and sampler loops on Noah "Panda Bear" Lennox's 2007 album, Person Pitch. Sea Lion, the new release from the Ruby Suns, an ever-changing New Zealand group fronted by multi-instrumentalist singer-songwriter Ryan McPhun, could be an extension of that technique and sound. Except this recording sounds as if it really was recorded in an airplane hangar (though it was not — nearly the whole album was recorded and performed by McPhun, in his home). And, there are plenty of Brian Wilson and other 1960s influences, namely Phil Spector's "wall of sound" and the Brill Building sound and instrumentation (Lieber and Stoller, Goffin and King). But there's more going on here than that retro foundation.

McPhun uses layers of traditional and non-traditional instruments intertwined with field recordings that are traced from a Chicago bar to ancient monasteries in Thailand to make Sea Lion distinct and engaging. Born and raised in Ventura, Calif., McPhun spent years traveling throughout Southeast Asia and Africa before settling in New Zealand. So, along with those '60s Brill Building influences, he also incorporates Polynesian and African influences, along with New Zealand pop elements into his songs (exemplified by preceding bands such as The Clean, The Bats and The Chills). Think Pete Seeger's version of "Guantanamera" remixed by Brian Wilson while under the influence of psychedelics. It's a bit mad (as in loony), and McPhun cultivates this cacophony of vast influences with an industrial production. And it works, quite beautifully.

"Oh Mojave" is a perfect example of how it works: guitars, mostly acoustic, and those multi-layered vocals are pushed up in the mix to propel the song and melody, while a trap snare, a djembe drum and a load of other percussive instruments (from a steel string ukulele to pots and pans), keyboards, melodica and horns help fill in a dense pastiche.

"Tane Mahuta," sung entirely in the indigenous Maori language, a celebratory ode to the grand Waipoua forest near Auckland, charges along sometimes feeling as if it was an odd, long-lost field recording.

Then there are straight-out psychedelia spin-offs, such as "There Are Birds," which features Amee Robinson on lead vocals, creating a dreamy, yet sublime, soundscape. Inspired by a drive through New Zealand's South Island, "Adventure Tour" is a small pop orchestral gem, building from a base of bright vocals, acoustic guitar and a zither, then suddenly, taking a turn and opening up into a splash of musical, sun-drenched color, aided with drums, flute, glockenspiel and bass.

There are a few weak spots on the record, places where the sonic treatments are given more importance than the actual song, evident on such tracks as "Remember," "Morning Sun" and "It's Mwangi in Front of Me." Overall, however, Sea Lion is an excellent, imaginative sophomore recording, fronted by a talented singer-songwriter-producer, who shows one can knit together a wide patchwork of influences, both organic and industrial, into a contemporary pop format, resulting in an otherworldly (and warm) musical quilt.