Sea to Summit: A Return to Salmon Mountain

Photo by Hollie Ernest Kelly atop Salmon Mountain in sunshine and snow shoes. 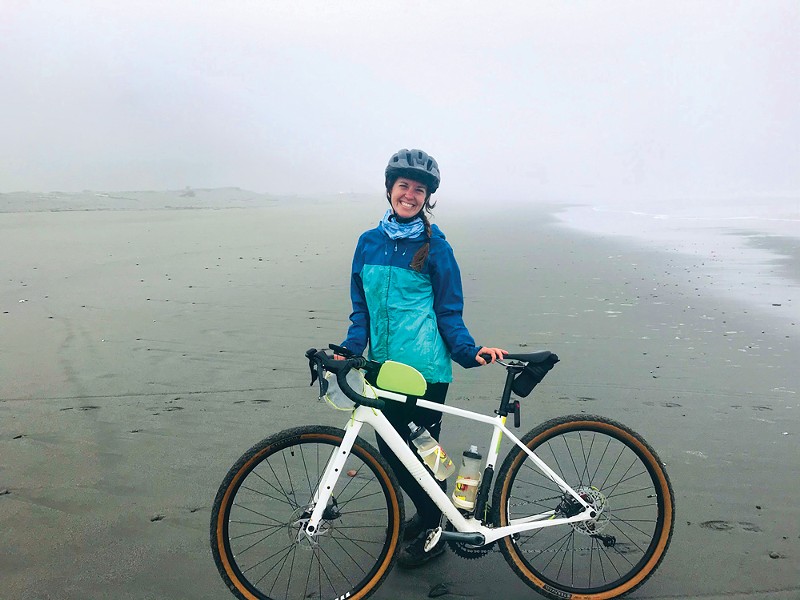 Photo by Hollie Ernest Kelly at Freshwater Lagoon, the start of an uphill journey.

While I was rushing to complete the Sea-to-Summit challenge in 2020, cycling and hiking from the ocean to mountain tops around Humboldt before weather and wildfires thwarted my plans, my friend Kelly was also pursuing all 10 peaks of the series ("Sea to Summit Part 1: Bald Mountain," April 22, 2021). Unfortunately, she didn't get to Salmon Mountain before the Red Cap Fire made access impossible. This uncompleted peak nagged the back of her mind through the winter of 2020. Kelly is a pharmacist, a busy lady with important responsibilities. She oversees large hospital networks that I pretend to wrap my head around but don't completely understand. In all fairness, she is usually explaining her job to me while we are pedaling up steep hills. She loves — loves — to ride uphill on her bike. More than riding downhill, if you can believe it.

Come spring of 2021, I told her I was up for driving a support vehicle with camping gear, if she still wanted to pursue the Salmon Mountain ascent. We could do it over two days. Like many of us, she'd had a rough year on several levels and really wanted to complete this challenge. Plus, I was excited to play cheerleader. On our chosen Saturday, May 1, Kelly picked me from McKinleyville in her truck, her long brown braid swept to the side of her wide grin. At the last minute, I grabbed snowshoes and ski pants from my garage, saying "I don't think we'll need these, but just in case!" Then we drove to Freshwater Lagoon, strategizing en route about when and where we would meet up later in the land of no cell service. She'd be taking Bald Hills Road, then follow State Route 96 to Orleans, then Red Cap Road to the Salmon Mountain trailhead and, finally, up to the peak, at 6,962 feet.

Dropping her off in the misting fog and crashing waves felt like dropping a kid off at school. Even though she is an accomplished cyclist, I told her, "Be careful! Do you have enough water? And snacks?" Kelly always has enough water and snacks. I am the fool who occasionally runs out. She was grasping and fidgeting with her handlebars like a racehorse waiting for the gate to open, then she was off.

While she pedaled east up and over the Bald Hills through Yurok ancestral territory, I drove back south to meet some friends at Stone Lagoon to swim. The wind picked up and we swam against roiling waves. We felt like pirates on the high seas and enjoyed the hell out of the tailwind on the return swim. After that mermaid session, I cranked the heat in the truck and set out to find my cycling friend. Bald Hills Road was still so socked in by fog I could barely see the outline of the lupines lining the road and the eerie oaks in the distance.

I didn't catch up to Kelly until State Route 96, where she was cruising through Karuk land. Riding from Orick to Orleans, what most consider a big effort, was like a warm-up to her. We stopped and chatted, but she didn't need anything. The sun found us, and the robust winds whirled the maple leaves and blossoms until they looked like they were hula-hooping. From State Route 96, you take a right on Red Cap Road, and it's a long and arduous climb on a bicycle to the Salmon Mountain trailhead, where we hoped to camp.

I drove ahead to scout our potential camp spot but a mile or so before the trailhead, thick snow piled on the road. I have always considered myself a cautious person, though not everyone (like my mom) agrees with that assessment. I didn't want to get my friend's truck stuck, or worse, careen off the cliff. Well, shoot. Good thing I brought the snowshoes. I left a note on the truck that read: "Be right back." Would we be able to summit after all? I had to find out.

The hike on the road was doable enough, with some areas covered with deep snow and others with none at all. We could at least access the trail and, from what I could see, it looked passable until close to the top, which was blanketed in white. It would be a 10-mile round-trip hike the next day and the fir trees, manzanita and madrone were almost unrecognizable in the fresh powder.

We crossed paths again and Kelly cycled to where the snow started, while I sought a decent camp spot lower down. I pampered her with potato chips, water and beer, and she was so appreciative she just kept smiling. We laughed at our multisport adventure — the snowshoes crammed in between a drying wetsuit, bike helmets, tents and clothes. The truck was a mess and we were delighted.

The next day, we woke up to sunshine and parked where she had left off cycling the previous day. With snowshoes secured, we went for it. The trail became harder to find the closer we got to the top. Digging the spikes into vertical white walls and using our hands, we went straight up. The views from the top brought tears to both of our eyes. We gazed at the Trinity Alps, the Marble Mountains, Etna Summit and Thompson Peak. I was proud of Kelly and her tenacity, and the hurdles she had overcome in the past year. We sang Lizzo: "I'm 100 percent that bitch, even when I'm crying crazy."

Those white peaks gave us a little bit of hope after such uncertain and tumultuous 18 months. Maybe this meant the wildfires wouldn't be as severe or maybe the water table could actually recharge. The return trip was borderline terrifying as we slipped and slid down the mountain. The drive home felt long and short, as we discussed life, love and the pursuit of happiness. For us, happiness was on a 6,000-foot snowy peak but maybe it was elsewhere for others. Either way, we hoped more people got to see that view, with or without snow. The golden afternoon light glared through the windshield and we couldn't believe the snowy magic, fickle wind and ocean-to-mountain scenery of the past 48 hours.

Hollie Ernest (she/her) is a botanist and forestry technician. She is writing a book about her international bike adventures, gardening and exploring the corners of Northern California. Find her on Instagram @Hollie_holly.

Get Out Salmon Mountain Sea to Summit Cycling