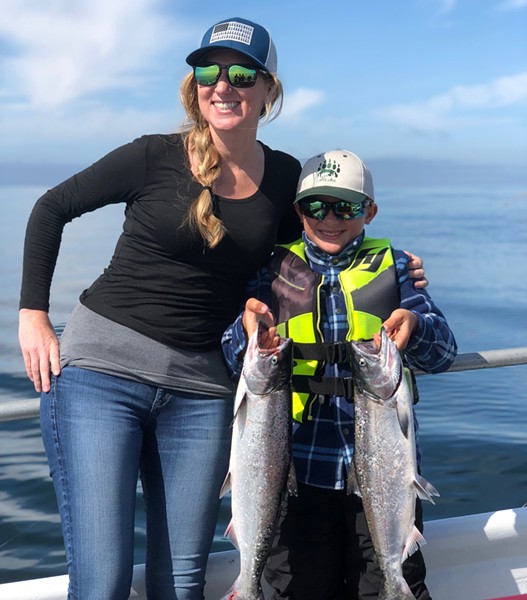 Photo courtesy of Curt Wilson/Wind Rose Charters Sport salmon anglers won't have much time on the water this year as the season will run for only 34 days on the North Coast, beginning June 29. Pictured are Chico residents Ryder Gregory and Heidi Musick, who caught some nice kings in 2019 while fishing in Trinidad.

Limited by a low-abundance forecast of Klamath River fall Chinook, North Coast recreational salmon anglers will have a little more than a month on the water this season. Management measures were designed to provide fishing opportunity for the more abundant Sacramento fall Chinook while reducing Klamath River impacts. Due to our proximity to the Klamath, this scenario never plays out well for our local fleet. Based on the 181,500 Klamath River kings forecasted to be swimming in the ocean, the Pacific Fishery Management Council (PFMC) came up with a short 34-day season for the CA KMZ (Oregon-California border south to Horse Mountain). The CA KMZ recreational salmon season submitted to the National Marine Fisheries Service (NFMS) is June 29 to Aug. 1.

Fishing will be allowed seven days per week for all salmon except coho, two fish per day and a minimum size limit of 20 inches total length for Chinook.

With only 271,000 Sacramento fall Chinook said to be swimming in the ocean, the seasons for areas to our south will also face restrictions. The area from Horse Mountain south to Point Arena, which includes Shelter Cove and Fort Bragg, will open June 29 as well, but will run through Oct. 31. The San Francisco area will open June 26 and also run through October. Typically these areas open to fishing in April but were pushed back this year to mitigate impacts on the fall Klamath River kings. Fishing will be allowed seven days per week for all salmon except coho, two fish per day and a minimum size limit of 20 inches total length for Chinook.

To the north in the Brookings area (OR KMZ), the Chinook season will open June 19 and run through Aug. 15. Fishing will be allowed seven days per week, two fish per day and a minimum size limit of 24 inches total length for Chinook. The hatchery coho season will begin June 12 and run through Aug. 28 or earlier if the 120,000 Cape Falcon to OR/CA border quota of coho is met. Fishing is allowed seven days per week. All coho must be fin clipped and a minimum of 16 inches.

Along with ocean salmon seasons up for final approval, the PFMC allocated 1,221 adult Chinook for the Klamath Basin quota. Bag and possession limits will be determined at the California Fish and Game Commission meeting on May 11. The tribal allocation is 8,135 adult Klamath River fall salmon, split between the Yurok and Hoopa Valley tribes.

Increased flows coming down the Trinity

The Trinity River flows will begin to increase Thursday, April 22, as releases from Lewiston Dam will increase to 1,450 cubic feet per second and then reach 1,500 cfs Friday. Flows will be reduced until next Wednesday, when they'll hit a spring-high of 3,550 cfs. Residents near or recreating on the river can expect levels to increase and should take appropriate safety precautions. A daily schedule of flow releases is available at www.trrp.net/restoration/flows/current.

The redtail perch bite wasn't wide open over the weekend, but there were fish caught. Fishing was reportedly better from the beaches south of Trinidad. Both jetties are providing a good mix of rockfish and a few lingcod. Tossing swimbaits has been one of the better options. Fishing is typically best two hours prior to high tide to an hour after the slack for the beach as well as jetty.

"Lingcod and rockfish action was good over the weekend and again Monday, but windy weather is expected mid-week," said Andy Martin of Brookings Fishing Charters. "A gale warning has been posted. Calmer seas are expected for the weekend. The best fishing has been from Bird Island north. Anchovies have arrived at the Port of Brookings, a good sign for the June salmon opener. Salmon season opens June 12 out of Brookings."

As of April 11, a total of 199 steelhead have entered the Van Arsdale fish count station, according to Andrew Anderson, an Aquatic Biologist with PG&E. Making up that total are 74 males, 84 females, nine subadults and 32 unknowns. The Chinook count stands at 65 and is done for the season. For more information, visit www.eelriver.org/the-eel-river/fish-count/.

As of Wednesday, the main was flowing at 1,330 cfs on the Scotia gauge. Reportedly, there are some steelhead around but fishing is tough due to the clear water. The main stem Eel to the South Fork is open all year. Only artificial lures with barbless hooks may be used through Sept. 30.

According to Martin, the Rogue continues to be slow for springers, but reports of ocean anglers catching and releasing a few hatchery kings near Gold Beach has anglers hopeful some salmon may finally be arriving. "The water is low but rain expected this week will give flows a boost. Catch rates have been poor all season on the Rogue," Martin added.