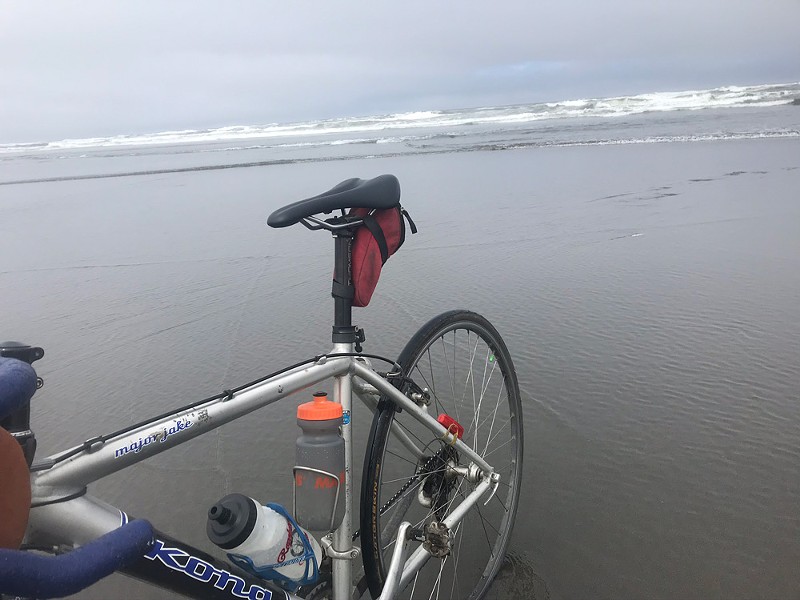 Photo by Hollie Ernest Starting out at sea level before heading up Bald Mountain. 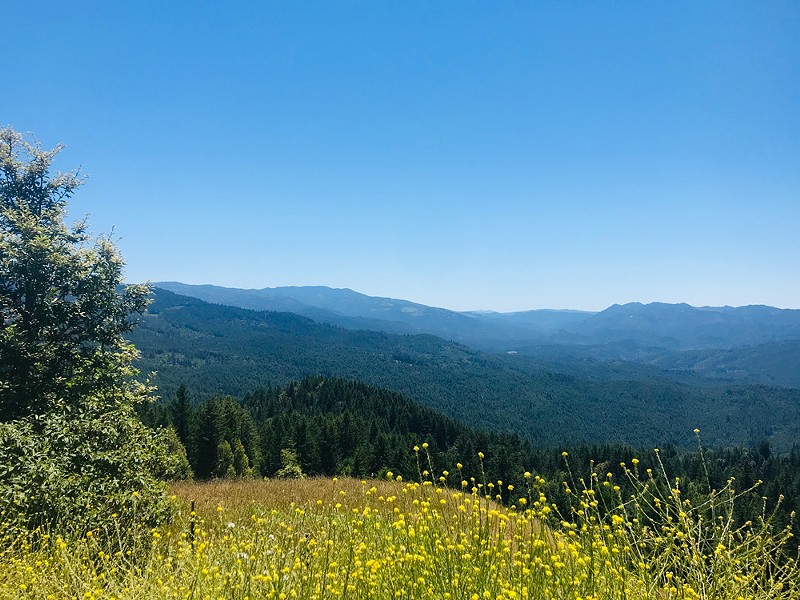 Photo by Hollie Ernest The view from the top of Bald Mountain and the start of a 10-part mission. 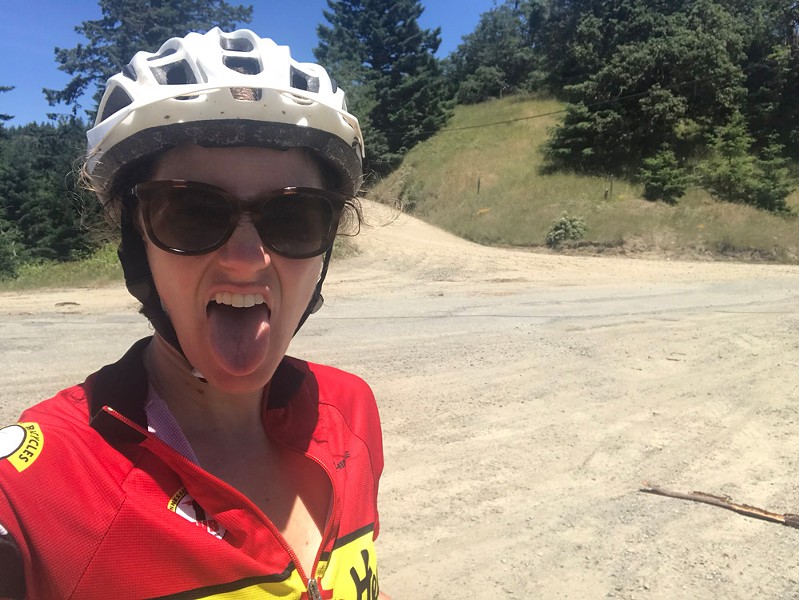 Photo by Hollie Ernest Running out of water on the ride from sea to summit.

We couldn't all cycle together in April of 2020, obviously. Cycling with a peloton of racers breathing heavily and sprinting uphill was not going to happen. Snot would fly as thighs burned, a dynamic that suddenly carried a novel, dangerous threat that was constantly evolving. We all wondered what the future held in this new limbo of riding from home, working and schooling from home. After being derailed one year into a multi-year bicycle trip, I started the summer searching for purpose and adventure. Embracing the unknown took on new meaning as travel restrictions hemmed us in and forced us to get creative on what it meant to explore.

We couldn't ride en masse but maybe we could ride "together" separately. Local cycling legend Mark Severy created a group on Strava (a social media platform where athletes can post a ride, run or surf, and compare times), and chose different segments around Fieldbrook that people could "race" solo in a week's time.

In June, Severy retired the weekly challenges and launched an adventure series called "Sea to Summit." He chose 10 peaks within Humboldt County to reach with minimal rules and an emphasis on the journey. The rules were: 1) Get there by your own power; 2) start at the ocean and get your toes salty (the bay didn't count); 3) end on one of the peaks; and 4) each peak required its own ocean start. You could bike, hike, pogo stick or rollerblade there, carrying your own snacks or with a vehicle carrying your stuff. It could be done in record time or take days.

One afternoon in late June, I casually rode to Mad River Beach, returned for a brief stop at my house, then headed up to Bald Mountain for my first of the 10 peaks. I started slow, not thinking too much about the day's ride. I hadn't mentally committed to all 10 peaks and was finding my cycling legs again after a much-needed break since coming home. The Korbel climb was a familiar sting in my thighs, but the steep gravel pitches after that had me digging deep and trying not to walk my bike. I emerged from the chilly summer fog and ran out of water, cursing myself atop a sunny and hot gravel road. Had I not toured through 13 countries, constantly assessing water sources? I was no rookie and felt stupid for my mistake, vowing to do better on the next nine peaks, if I even got that far. I texted my husband, asking him to put some water in the fridge for my foolish self. I was so parched that cold water was all I could think about as I descended, dodging fully loaded logging trucks on the way home.

I took one whole day to map out the rest of the peak routes, scheming and bouncing ideas off of my husband, who offered to play support when needed. Where is Grasshopper Peak? And Salmon Mountain? Was it near the Salmon River or closer to the ocean? What about Signal Peak? Behind Black Lassic ... wherever that is. I pored over the map. I missed poring over maps. I was in. I was so in. I hoped to reach all 10 summits but was still struggling with some medical issues after my 14 months in South America. Could I do it? Would I do it? I wasn't sure but I would sure as hell try.

Being forced to start from the ocean made all the routes unique, and the beach added a little slice of cloudy calm and a chance to say hi to the waves. It also made reaching that first summit incredibly satisfying and I was hooked. I still longed for Argentina and Algeria, but, as the months wore on, I suddenly found myself completely content exploring my own backyard, realizing how lucky I was to have such an extensive and majestic backyard to revel in. My mindset changed from seeing adventure as border crossings and new languages to embracing the task of finding hidden gems, ravines and trails more locally.

One by one, I pursued the peaks. The logistics of getting to places like Salmon Mountain and Black Lassic made for epic days, sometimes multiple days. Even though I remembered each painful uphill pedal stroke, I still questioned the trip once atop a peak, "Did that really happen?" The cool coast felt eons away from each pinnacle. As the weeks and months passed, the adventure series successfully created a community of people, engaging with each other when we all felt otherwise isolated. Encouragement, inspiration and information flowed freely, and that stoked my fires even more.

I tried to recruit others for this occasionally masochistic quest but settled for bringing different friends along on each ride, spreading out the pain so my friends would still actually want to ride with me. There were planning co-conspirators and those coming along for the ride. My husband was unwaveringly supportive, listening to my plans and offering suggestions or a ride home from the more far-flung summits. Some friends loved it, others did not. We dodged wildfires, occasionally started before dawn and ended after sunset.

I got out of my comfort zone, piqued my own curiosity, and found the purpose and adventure I craved. Sometimes I wanted to give up mid-ride; sometimes I was so nauseous I couldn't eat; sometimes I felt like my eyeballs would explode from the heat, or my hands were permanently numb from the cold. I ran out of water once more, fool that I am. Every journey was like a neon billboard that reminded me what an amazing place we live in and, strangely enough, I had one of the best summers of my life. Humboldt County truly embodies California's motto: Freedom to Roam.

Stay tuned for dispatches from the journeys to the next nine peaks.

Hollie Ernest (she/her) is a botanist and forestry technician on hiatus from an international bike tour. She is writing a book about her travels, gardening and exploring the corners of Northern California. Follow her on Instagram @Hollie_holly