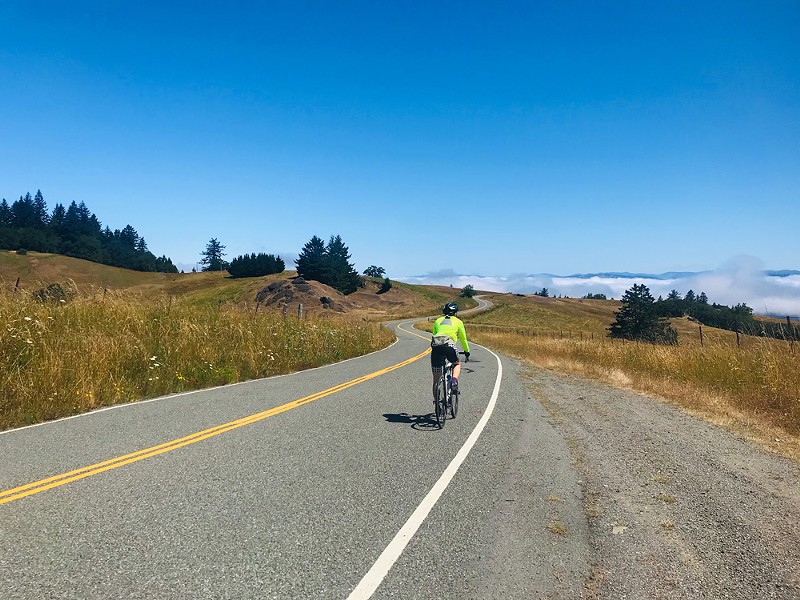 Photo by Hollie Ernest The ride to Barry Ridge.

Photo by Hollie Ernest The Kneeland Mountain climb into the mist.

Photo courtesy of Hollie Ernest Goofing in the waves before the ascent to Barry Ridge.

Preparing for the next leg of the 10 Sea to Summit challenges, a series of human-powered Humboldt adventures starting at the ocean ("Sea to Summit Part 1: Bald Mountain," April 22), I had to research the location of Barry Ridge, only to realize it was a short jaunt off my regular cycling route up Kneeland Road. (The route can be found at www.humboldtseatosummit.com.) Maybe because the route covered mostly familiar terrain, I underestimated the Barry Ridge Sea to Summit. You go up Kneeland, then over a bit to the radio towers overlooking Humboldt Bay. No big deal, I thought.

In July 2020, things with COVID-19 were still topsy-turvy and even though I wasn't working full time, I still felt discombobulated. I bought a weekly planner that was still 90 percent empty. A friend was staying in her truck in my driveway and everyone's schedules were slanted due to businesses and schools being closed. Weekdays and weekends lost their meaning, smearing together like an oil painting that turned into spin art. Riding my bike was the only thing that made me feel like I — and perhaps time — was indeed moving forward.

I had tackled a few hard rides in one week in an effort to hold onto the fleeting feeling of groundedness. One included 10,000 feet of climbing, another two with technical mountain bike trails and yet another involving bonking: feeling dizzy and weak due to lack of calories, but past the point of hunger, often leading to a muddled mind and fractured thoughts, sometimes accompanied by crying and/or delirious laughter. It's usually attained during a sporting endeavor by someone who should know better.

I asked my ever-positive, ever-bubbly friend Lacey to ride with me to Barry Ridge from the ocean. I knew she wouldn't mind if I was tired, not tired, slow or fast. Lacey is wonderful in that way. Native to Humboldt and an unflappable ER nurse, joined me with friends in Costa Rica as part of a longer tour and turned every negative into an overwhelming positive. Torrential rain for days on end was "amazing jungle weather!" When we crossed a flooded river rumored to contain crocodiles, it was "like on the Nature Channel!" and when there were four beds crammed together in a single hotel room for the five of us and our moldy gear, with a storm raging outside, it was "a slumber party!" I knew she was the perfect person to join me for this foggy morning ride that I wasn't sure my tired legs were entirely ready for.

We met at the Samoa Beach parking lot, shivering in the misty haze after getting out of our cars. My husband drove me there so that I could pedal home afterward without the additional 16-mile return to the start. It also made it easier to get out of bed.

We walked onto the hard-packed beach at low tide, said hello to the calm waves. I joked that we could call this series "fog to sun." We bantered for a few minutes, took silly photos with our bikes next to the waves. A cold blue hue covered everything and the birds were hiding. Not a sandpiper or gull was in sight among the placid waves.

We set off in the gray to cover miles through the historical and unceded territory of the Wiyot Tribe. I soon realized there was a plethora of sand in my shoe. "It can wait," I thought. Well, no, it really couldn't. The traffic on Myrtle Avenue was heavy for an early Saturday morning and I didn't want to stop. I performed a rare feat of grace in removing my shoes and dumping out all the sand while still riding. When I started writing this piece, in an effort to jog my own memory, I asked Lacey what she remembered about this day and she texted back only this: "Sand in sock. emptied on the go. Pure talent." Well, OK. We still had a mountain to climb.

After turning onto Freshwater Road, then Kneeland Road, up we went through the haze, into the cloud. We cycled through bands of thin and thick vapor as other cyclists passed us. We ran into Mark Severy, the creator of this series, and struggled to keep up and talk between breaths. The Kneeland climb usually takes me anywhere from 40 minutes to an hour, depending on fitness and motivation. We took it easy this day, and the switchbacks felt smooth and familiar as I settled into my easiest gear, letting my mind wander far and wide.

We turned onto Barry Road and still hadn't broken out of the coastal climate, but we could see the edge of the cloud cover, with tantalizing blue sky beyond. Like a mirage, it kept getting farther away from us, our speed matching that of the drifting clouds. Finally, we emerged to meet the radiant and warm sun, warming our limbs and our moods. The dandelions bounced their cheery yellow pom pom heads and we looked smugly at the veil of the surrounding valleys, riding along the ridge like two giddy school girls. The clouds spread below so thick it resembled a solid white surface. I wasn't sure exactly which spot marked the "top" but Lacey knew the spot, which is apparently a popular stargazing (and makeout) spot. We reveled in the views of the marvelous county we call home over high fives and more photos.

We descended through the usual shivering cold the Kneeland descent involves, and rode along Old Arcata Road until we parted ways to return to our respective houses. The "familiar" ride of 50 miles had taken much longer than expected and in my final 10 miles I suddenly bonked (insert head in hands here). I arrived home cold, exhausted, ravenous, elated, slightly delirious and feeling like our little excursion had taken us to a slice of heaven. After eating half the contents of the refrigerator, I showered, put on silky pajamas and climbed into bed in the afternoon, feeling a renewed glow of hope for the world.

Hollie Ernest (she/her) is a botanist and forestry technician on hiatus from an international bike tour. She is writing a book about her travels, working, gardening and exploring the corners of Northern California. Follow her on Instagram @Hollie_holly.