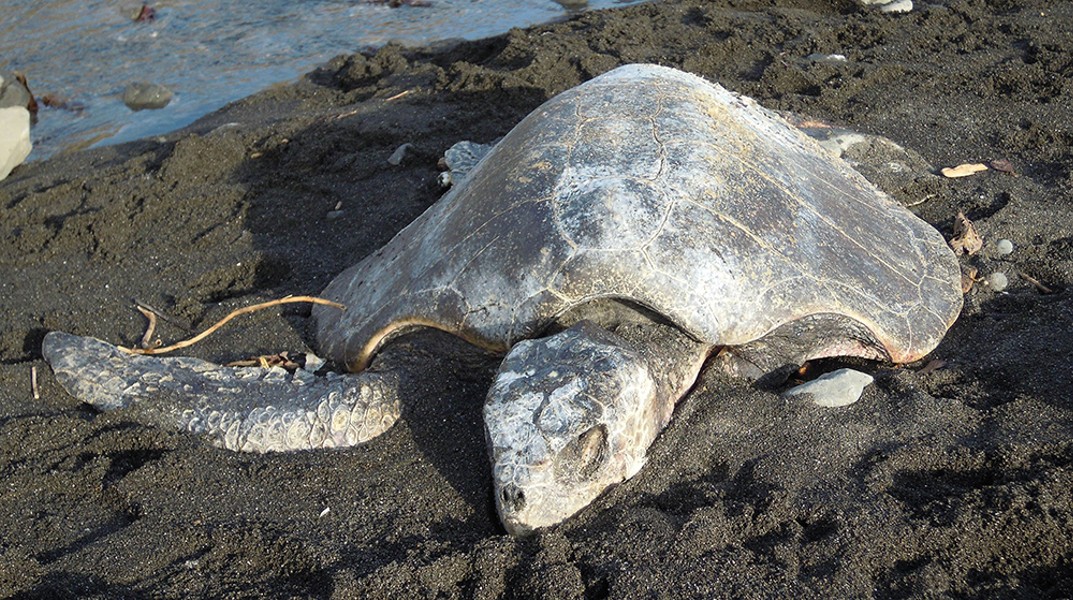 Photo by Mike Kelly A sexy back flipper claw.

Photo by Mike Kelly The olive ridley's beak — not built for comfort.

Sometimes distant things on the beach aren't what they first seem to be. For example, I recently thought I saw a washed-up great white shark. But it turned out to be a king-size mattress folded in half.

Once near Cape Mendocino I thought I saw a flying saucer on the sand up ahead. I froze. Space aliens make me nervous because my imaginary friend tells me I'm a "chosen one." And I'm not ready yet. But my imaginary friend is one of those nutty conspiracy theory guys, so I ignored him and continued walking. The unidentified object was only a dead olive ridley sea turtle (Lepidochelys olivacea).

Olive ridleys are the smallest of sea turtles and this was a full-grown male with a shell about 2 feet long. They normally live in the tropics and stay in warmer offshore waters when they venture this far north. They eat jellyfish, swimming crustaceans, very slow fish, etc. But they don't fare well in our nearshore cold water.

They are also the most numerous sea turtle and they work hard at it. A female may mate with multiple males until she is, apparently, satisfied. After that, she'll give a good thrashing to would-be late comers.

Now imagine that you and your sweetie are floating in a warm sea — wearing body shells, with flippers instead of arms and legs. You'd like to mate but you have no surface to lay on. And the chances of finding a floating king-size mattress are almost zero. Plus, you have nothing to hug and hold each other with. The act would be awkward because you can't just swim full-speed at each other, hoping to stick the landing.

And if you did manage to joust yourselves together, even small waves would separate you in seconds. Real olive ridleys mate for several hours at a whack.

So you have two problems: 1. You have to merge your organs around your shells; and 2. you have to maintain a grip with flippers.

Our male turtle still had his penis tucked away. In action, though, his winkle emerges from his cloaca near the end of his tail, which gives it extra reach and maneuverability.

And the claws on a male's flippers are long and curved so they hook under the edge of the female's shell as they do it turtle style. It may seem rough and clunky, but I like to think the sex claw embrace feels wonderful to them.

During the nesting season, thousands of female olive ridleys hit certain Mexican beaches to lay their eggs in gatherings called arribadas. So to continue your sea turtle reproduction role-play, you'll need to flipper-crawl up a beach, flipper-dig a hole and give birth into it.

But the most obvious form of female satisfaction solution is probably not an option. You'd think eating jellyfish and being able to hold their breath for hours would make male sea turtles master lady pleasers. But unfortunately, where we have lips, they have beaks.

By the way, thanks to the hero(es) who removed the mattress from my local beach!