Season of the Suck

In the dead zone between summer and fall, Hollywood crap washes ashore 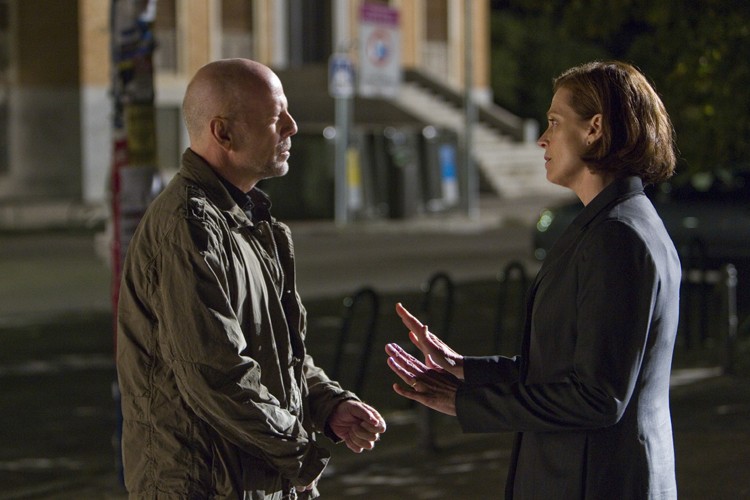 THE COLD LIGHT OF DAY. It seems we are slipping down to the nadir of the cinematic calendar. Late winter/early spring is usually regarded as the doldrums: The studios unload the worst movies of the year between awards season and summer blockbuster time. But now, either due to lack of imagination or quality content or both, the end of summer has apparently become a second dumping ground. And we are right in the middle of it.

There isn't an angle from which to approach The Cold Light of Day that makes it look like anything but a complete failure. The actors, though capable and proven, are almost all miscast; the plot is hackneyed and threadbare; the action scenes rumble noisily along without any excitement or fun. Think Hitchcock without the style, humor or intelligence.

Will (Henry Cavill) is a 30-something businessman whose company is failing. In the midst of bankruptcy proceedings, he joins his family for a sailing vacation in Spain. Dad Martin (Bruce Willis) is supposedly a cultural attaché with the U.S. Embassy in Madrid. After a falling out with the parents, Will leaves the boat to spend a day in town. When he returns, the boat and his family are nowhere to be seen. After some predictable, pointless interactions with the local police and a shadowy Israeli, Will reconnects with Martin. Turns out dear ol' dad is actually some sort of black-bag CIA operative with a lot of enemies, some of whom kidnapped the rest of the family. Spoiler alert: Martin gets taken out at a late-night meet with the vaguely sinister Carrack (Sigourney Weaver), sending Henry on the run. Aided by an ingénue, he runs around Madrid wild-eyed, somehow avoiding what should be certain death at the hands of myriad assassins.

The strangest thing about The Cold Light of Day might be the fact that the filmmakers managed to rope in Willis and Weaver. They may not always pick winners, but you'd think they've both been around the block enough times to recognize a loser when they see one. And, for that matter, why would a studio pay the salaries of veteran A-list talent, only to put them in a project like this? We may never know, and frankly it's not worth spending any time or energy thinking about it -- or watching the movie, for that matter. PG13. 93m.

THE WORDS. The makers of The Words seem to think that adding needless narrative layers to a story will make it complex or compelling. They're wrong: It just makes a longer, duller movie. In this case, a tactless story within a story within a story, all ostensibly about beauty and pain as experienced by writers. Despite some charm and depth in the cast, it plays like a TV movie.

Our first writer, Clay Hammond (Dennis Quaid), opens the proceedings by giving a reading of his latest novel. The protagonist is our second writer, Rory Jansen (Bradley Cooper), who in struggling to get published has plagiarized a manuscript he found in a cast-off briefcase. Said manuscript being the work of our third writer, The Old Man (Jeremy Irons). The narrative plods along, shifting between the post-World War II experiences of The Old Man, Jansen's rise from mail-clerk to publishing wunderkind, and Hammond's increasingly uncomfortable interaction with a sexy fan (Olivia Wilde) during and after his reading.

It pains me that a movie about writers and writing is so unimaginative, poorly plotted and badly written. The story has been told countless times before and misses the opportunity to do anything thoughtful or original. At the heart of the story is a vague notion about bleeding for one's craft and the terrible guilt that should attend the theft of another's work. But these subjects are dealt with cursorily and then too-conveniently filed away.

Cooper, handsome and sensitive, does what he can with a poorly drawn character. Irons tries mightily to convince us that he really is an Old Man. Quaid does what we expect from him, but it's hard to say why his character even needs to exist. For me, Zoe Saldana is the standout as Cooper's loving, long-suffering wife. Other than her performance, The Words is overlong, under-written and unremarkable. PG13. 96m.

RESIDENT EVIL: RETRIBUTION. I can't remember: Was Milla Jovovich supposed to have, like, a real career at some point? This marks her fifth turn in the critically reviled, commercially boffo zombie-slaughter franchise based on a series of video games. Mmm, brains! R. 95m.

LAST OUNCE OF COURAGE. The latest in what's become a steady stream of propaganda films from evangelical tea party types, this film purports to "take a stand for faith, family and freedom." For Christians, anyway. PG. 101m.

ROBOT & FRANK. Set in the near future, a retired jewel thief (Frank Langella in an acclaimed performance) receives a robot caretaker as a gift from his son, but he has another plan for the ‘bot. PG13. 90m.

THE IMPOSTER. This documentary thriller recounts the story of a 13-year-old Texas boy who disappeared in 1994, and another boy who appears in southern Spain three and a half years later and convinces the boy's grieving family that he's their son. R. 99m.

On Friday night, The Arcata Theatre Lounge brings back Mike Meyers' doofus secret agent in Austin Powers: The Spy Who Shagged Me (1999). This is the one with Heather Graham. On Sunday night, Adventure's Edge presents The Radical Reels Tour, a collection of "the best high-adrenaline films" from the Banff Mountain Film and Book Festival. The YouTube trailer posted on ATL's website is pretty jaw-dropping. Next week's Sci-Fi Pint and Pizza Night, on Wednesday, features Logan's Run, the campy 1976 saga of an idyllic future where nobody lives past age 30. That will be followed by a "vintage Italian space opera" called Escape From Galaxy 3 (1982).

THE DARK KNIGHT RISES. Is it a fascistic diatribe against the Occupy movement, or just a Batman movie? Discuss. PG13. 164m.

THE EXPENDABLES 2.  Stallone, Schwarzenegger, Norris et aliiemploy steroids and explosives as they rage against the dying of the light. R. 102m.

THE ODD LIFE OF TIMOTHY GREEN. A barren couple writes down their hopes for a young'un, buries them in the backyard, and hark, a dirty kid emerges. PG. 100m.

THE POSSESSION. Available for rent: Body of young girl. Tenant must be malevolent spirit who can freak parents out by making girl convulse and puke locusts. PG13. 91m.