The Eureka Rescue Mission prepares to turn 50, with more mouths to feed than ever 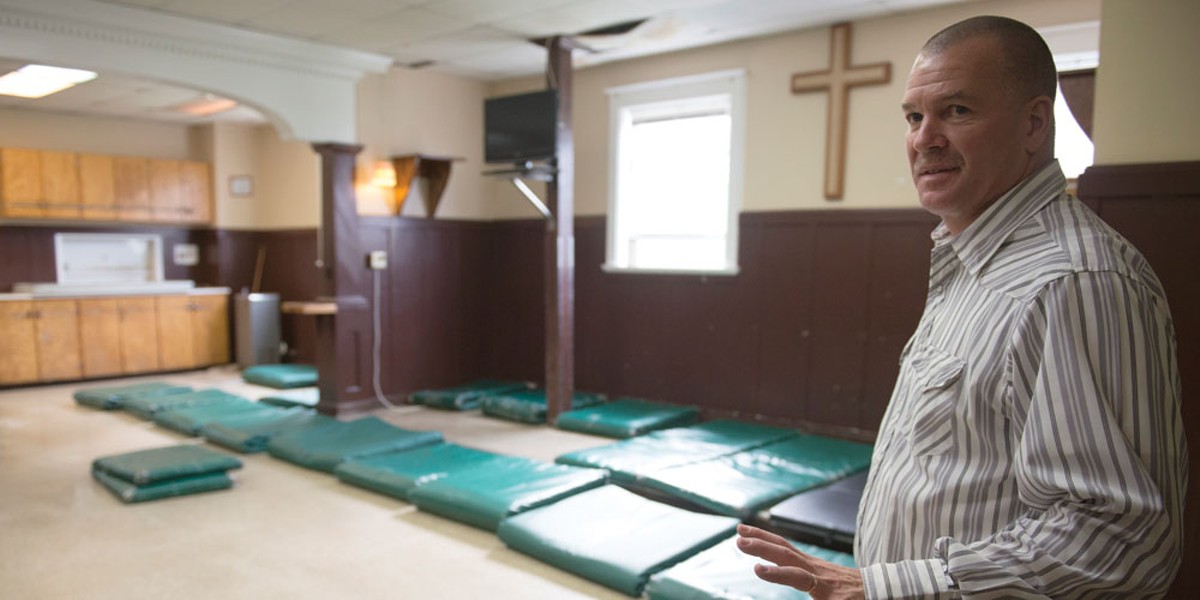 Photo by Mark McKenna Bryan Hall shows the mats that will be used for those in need of a safe night's sleep in the former dining hall at the Eureka Rescue Mission.

Photo by Mark McKenna Director Bryan Hall listens to Deshawna Morris, house manager of Women and Children's Emergency Services, discuss the demand for beds in the women and children's wing of the Eureka Rescue Mission.

In the lobby of the Eureka Rescue Mission, a man sits with his head in his hands, waiting to be called up to the desk. He is middle-aged, with shaggy brown hair and a few days' worth of stubble. His dirty jeans reek of urine. His face is one big eggplant-colored bruise. Bryan Hall, executive director of the Rescue Mission, pauses and takes a long look at him. It's an appraising look, the look of someone adding another task to a long list. Hall has an office, but says he's rarely there. He likes to be among the men his program brings in off the street, doing what he calls God's work.

Established in 1967, The Eureka Rescue Mission is the longest-running emergency shelter program in Humboldt County. The Mission provides food, shelter, clean clothing, showers and access to resources for those in need — as long as they're sober and there's enough room. It has enough beds to accommodate 95 people. But lately, with the arrival of stinging winter rains, need is beginning to outstrip its resources. One night last week, the facility took in 147 men, women and children.

Hall shows us the cafeteria, part of the new addition completed in September. The new facility includes a bright lobby, a baggage room, a study area, professional kitchen and a day use area where the men can stay after breakfast. The dormitories, which accommodate up to 65 men, are only open for use during the evening. Since the rains began, staff has begun bunking men on the cafeteria floor, on camping mats. On the bottom floor of the dormitory building, folding cots are crammed into every available space — the former offices and kitchen, the nook where the chapel once was. Hall says mats, blankets and food are all in short supply.

"Our donor base is declining," he says. "Many of our faithful donors are getting older and going into nursing homes."

He points to boxes of letters stacked on a cafeteria table, ready to go out to potential donors. Helping Hall prepare the letters are members of the Men's New Life Discipleship Program, a year-long, faith-based residential program. Hall says the program has an astonishing success rate, with more than half of the graduates estimated to go on to employment and successful lives. He graduated from the program himself 11 years ago, after serving time for possession of methamphetamine. After graduating, Hall worked at the Mission's thrift store, then became a house manager at the shelter, eventually training to become the program's executive director.

Most Mission staff are previous clients, he says. They have a special bond with the people they serve, and an ability to meet them where they are. And the clients continue to surprise him with their resilience, with their stories, with how far they've come or how far they've fallen.

"After 11 years working here, I've learned to never judge a book by its cover," Hall says, gesturing to one client in the men's program, a young man with numerous tattoos he says is a classical pianist. One of the regular nightly clients is an engineer who lost his career due to mental illness. Many of the people who stay in the dormitories are members of the invisible poor, he says. A majority of them have jobs, working in the fisheries or during crab season. The Mission outfits them with clean clothing from its thrift store. Hall says you could walk past most of his clients and never know they were homeless.

In the pantry, large industrial shelves are stacked with canned goods and loaves of bread. While it looks like an imposing amount, Hall says that without incoming donations, the shelves would be bare within two days. In September, the Mission served 8,761 meals and provided 6,748 showers. What little food is left over gets donated to the Betty Chinn foundation or packed into food boxes, which Hall says are given out to whoever asks for them. Chinn's work in Eureka has resulted in a "phenomenal partnership," says Hall. Many of his clients go to her center to work on their resumes during the day. The Mission also works closely with St. Joseph Hospital and the county Department of Health and Human Services.

Despite everything, the number of those in need keeps growing. Hall says that an increasing number of those who arrive at his door are dealing with mental illness or another kind of co-occurring disorder. He disagrees with the theory floated by local businessman Rob Arkley that homeless people are attracted to the area because of the large amount of social services. He points out that homelessness was an issue in the area when the Mission was founded 49 years ago.

"There are too many contributing factors as to why things are the way they are," he says.

Over the past two years, as the city of Eureka has struggled to address issues with homeless people camping on city property, it has referred to the Rescue Mission as a "prime example of available services that go unused." Why, logic follows, would anyone choose to sleep outdoors when there's a bed available?

But Hall says he knows being indoors is not for everyone. Many people with mental illness just won't tolerate being enclosed. Some may not have the photo I.D. required for entry. Others have partners or pets they won't separate from, or active addictions whose pursuit isn't tolerated within the Mission's walls. While the Mission does have a zero tolerance policy for drugs and alcohol, Hall says people do periodically come in with "a little alcohol on board," and are allowed to stay after a staff member has talked to them and assured that they won't be disruptive. It has become so common for the men to use alcohol to try to stay comfortable during cold winter days that the program has relaxed its use of the Breathalyzer, at least on the men's side. Because the women's side usually has children, the rules there are a little stricter.

Clients might also be put off by the overtly Christian philosophy of the facility, which does offer chapel services and Bible study to its guests. But, contrary to rumors, Hall says they do not require the men to listen to the gospel in order to receive services. Many attend chapel services out of choice, he says. Nor, he insists, do they turn away gay people. He calls that rumor "ridiculous." Also false? The rumor that guests in the women's shelter are required to cook and serve for the men's side. In fact, it's the opposite. The men prepare the food then run it over to the women's house.

"We bring them whatever they ask for," he says with a grin. "Which is how it should be."

There are continued limitations to what the shelter can provide for women and children. That building is around 100 years old, and has yet to be retrofitted to accommodate guests who can't climb the two flights of steps up to the dormitories. Currently the building houses around 30 women and children, who are offered classes on life skills, cooking and the Bible. While its capacity is small, Hall says it sees great results with helping families rebound.

"Women just seem to get their stuff together faster," he says. He adds that the organization would like to add more family housing but it doesn't have the money or the room.

Hall says his biggest goals right now are getting bunkbeds to accommodate more men, enough food donations to make it through the holidays and money, always more money. The Rescue Mission has been running on private donations for almost its entire history but for a number of reasons its donor base has declined, even as need has grown.

"Ultimately, the cost of living is going up," says Hall. "It's causing people to have to make tough decisions."

Critics may argue that a private religious institution should not be the go-to resource for our destitute and vulnerable, but a secular alternative on the same scale has yet to be funded. The Rescue Mission remains the only walk-in shelter in Eureka, and one of only two in the county. While many people may still fall through the cracks — possibly too drunk, too mentally ill or religion-averse to utilize its program —– the number of people it accommodates dwarfs that of other programs. Far from being under-used, the institution appears to have been quietly shouldering the burden of the region's growing homeless problem for decades, even as city and county governments quibble over who, and how, to best address this issue. In the meantime, Hall says his staff will continue to line the floor of their cafeteria with mats and blankets on rainy days. No one, he says, will be turned away.

Editor's note: In the interest of full disclosure, it should be noted that the family of Mark McKenna, the Journal's photographer, helped build and donates to the Rescue Mission.