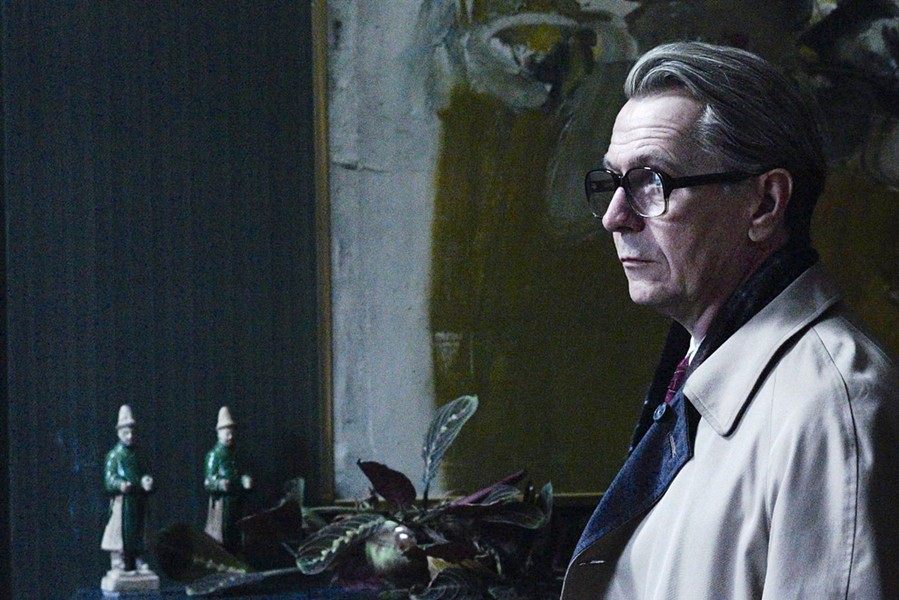 TINKER TAILOR SOLDIER SPY. Like his 2008 film Let The Right One In, Swedish director Tomas Alfredson's Tinker Tailor Soldier Spy is beautifully composed and photographed. Permeated with an air of impending doom, this film is fully realized and completely effective, if at times painfully slow.

Tinker is adapted from the John le Carré novel, and the movie uses the author's technique of building from a simple premise into complex, trans-continental cloak-and-daggery. It's the early 1970s, the height of the Cold War, and tensions are running high in the spy community.

Gary Oldman has rightfully received glowing praise for his portrayal of the ironically named George Smiley, a journeyman spook left out in the cold after his boss got squeezed out of his command for botching an attempt to ferret out a Soviet mole within British intelligence. Smiley is tapped to take up the investigation from outside the agency.

Thanks to Alfredson's talent for atmosphere, Oldman's masterfully subtle performance, and an ensemble cast that serves as a "who's who" of contemporary British cinema (Colin Firth, John Hurt, Mark Strong, Ciarán Hinds), we are quickly drawn into the violent, paranoid world of European Cold War espionage. On the one hand, Tinker is a large-scale historical spy thriller. On the other, it's an astutely observed character study of a singular man's place in time.

As Smiley meticulously studies the Soviet mole's maneuvers (and those of the Eastern bloc heavies backing him), we also get to see his personal world. His wife has left him, again, and without his work he would clearly be lost. He is a man defined by a job that's founded on secrecy and distrust, in a conflict without clear boundaries or purpose.

By movie's end, it seems there may be some hope left for George Smiley, but the heavy toll he has paid shows in the lines of his face and the way he draws labored breath. R. 128m. At the Minor.

MY WEEK WITH MARILYN is a tough nut to crack. It is an unfortunately light treatment of its subject, yet it contains some of the most watchable, entertaining performances in recent memory. As Marilyn Monroe, Michelle Williams is mesmerizing. She captures all the aspects of the starlet that made her so unique. She is an ungainly combination of sex and insecurity, insulated from reality by fistfuls of barbiturates and overpaid handlers, forever caught between playing Marilyn and figuring out how to be herself.

The movie is drawn from the diaries of Colin Clark (Eddie Redmayne), a proper Eton lad with aspirations of working in the film business. He gets a shot as third assistant director when Sir Laurence Olivier (a very funny Kenneth Branagh) brings his circus to town, with Marilyn co-starring. The narrative gives almost equal time to the on- and off-set difficulties. Olivier, the consummate professional, is frustrated by Marilyn's ongoing tardiness and insecurity. He is doubly plagued by the presence of her hard-hearted acting coach and molly-coddling business partner. Marilyn is shot through with self-doubt, intimidated to be working with the blustery stage star. Meanwhile her new marriage to playwright Arthur Miller is on shaky ground, and she and Colin start a breathless relationship.

Were it not for a cast of extremely talented actors doing fine work, My Week would be an easily forgotten period drama. Williams' performance is really amazing, and Branagh makes an excellent foil. But the characters they create are more substantial and complex than the movie in which they find themselves. It can't seem to find the right tone for the material, and as a result comes off a little too blithe for its own good. R. 99m. At the Broadway.

THE DEVIL INSIDE. When The Devil Inside finally reached its abrupt and appropriately unsatisfying conclusion, a woman behind me jumped out of her seat and addressed her friend: "Let's get the fuck out of here. I can't believe this shit. That was the worst movie I've ever seen." The friend joined in, and their expletive-strewn rant continued as they made their way out of the dark theater. My feelings aren't quite as strong, but I take similar offense to a movie this bad.

The Devil Inside attempts to pass itself off as a found-footage documentary (yes, another one), which is really just an excuse for poor camera work and acting. The only scares are founded on the cheapest of tricks, and the movie manages to be gross, crass, dull and unimaginative all at the same time. The filmmakers would probably contend that they are exploring the truth behind "real" Catholic exorcism. They would be lying. To borrow a phrase from Paul F. Tompkins, this is "the phoniest of balonies." R. 83m. At the Broadway and Mill Creek.

CONTRABAND. Chris Farraday (Mark Wahlberg) is a legendary drug smuggler, but he quit because drug smuggling is bad. His brother-in-law is a lousy drug smuggler who botched a deal for his ruthless boss (Giovanni Ribisi). Should Chris and his ragtag crew and seek revenge against the treacherous villains? Moral quandary! R. 110m. At the Broadway, Mill Creek and Fortuna.

JOYFUL NOISE. Country superstar-turned-freaky marionette Dolly Parton costars with Queen Latifah as catty choir members with different opinions on how to win a national competition. PG13. 118m. At the Broadway and Mill Creek.

BEAUTY AND THE BEAST 3D. Remember the animated Disney version from 1991? Yeah, this is that movie. Same one. Only now it's in 3D so you need glasses and more dollars. Oh, and there's a six-minute sequel to Tangled beforehand. 90m. At the Broadway, Mill Creek and Fortuna.

Friday is Friday! Let me explain: On Friday, the Arcata Theatre Lounge will show Friday, the 1995 stoner comedy starring Ice Cube and Chris Tucker. Rated R. 8 p.m. Sunday is generally family day at the ATL. This weekend's feature is An American Tail, the animated, uh, tale, from director Don Bluth (The Secret of NIMH) about a young Russian immigrant mouse. PG. 6 p.m. Sci-Fi Pint and Pizza Night rolls around Wednesday with a double-feature of Soylent Green (1973) and 984: Prisoner of the Future (1982). 6 p.m. Watch your fingers at the snack bar!

ALVIN AND THE CHIPMUNKS: CHIP-WRECKED. People actually go to movies like this, which is why the rest of us can't have nice things. G. 87m. At the Broadway and Fortuna.

THE GIRL WITH THE DRAGON TATTOO. Director David Fincher adapts Stieg Larsson's brutal literary blockbuster, which follows a reporter (Daniel Craig in this film version) and a mysterious, Gothic waif (Rooney Mara) as they uncover the dark secrets of a wealthy Swedish family. R. 158m. At the Broadway and Minor.

HAPPY FEET TWO. Animated penguins shake their downy tail feathers and crack wise with the voices of famous actors in this sequel to 2006's Oscar winner for Best Animated Feature. PG. 100m. At the Garberville through Monday.

MISSION: IMPOSSIBLE - GHOST PROTOCOL. Following a bombing at the Kremlin, the Impossible Missions Force is shut down because -- oh, whatever. Tom Cruise running, punching ... explosion! PG13 133m. At the Broadway, Mill Creek and Fortuna.

SHERLOCK HOLMES: A GAME OF SHADOWS. When the powers of deduction fail, my dear Watson, we shall punch these chaps square in their gobs. Pip pip! Cheerio! PG13. 129m. At the Broadway, Mill Creek and Fortuna.

WE BOUGHT A ZOO. Following his wife's death, a dad (Matt Damon) tries to cheer up the kids by ... well, let's not give away the plot. PG. 124m. At the Broadway and Fortuna.