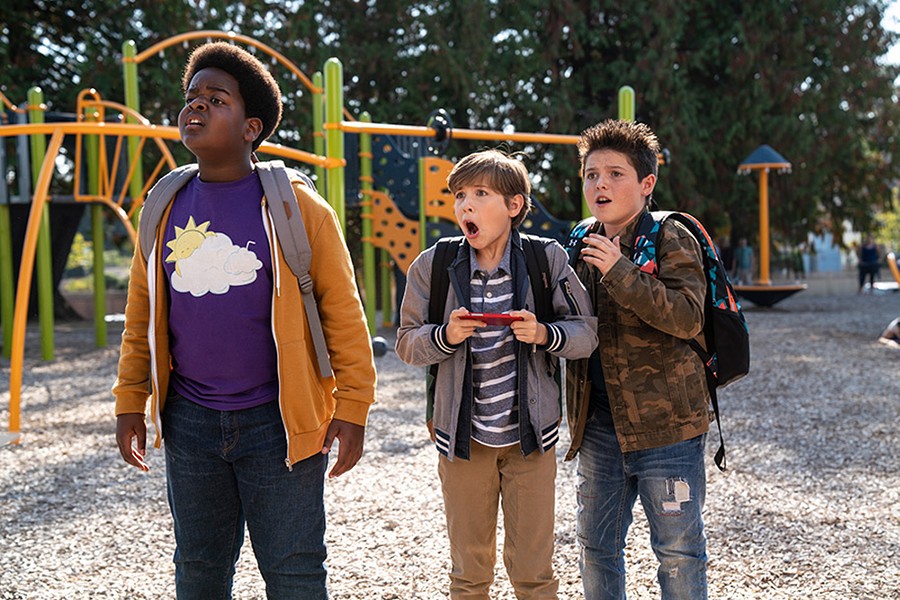 Good Boys Nobody cares what you look like when you run, right?

GOOD BOYS. Because I spend time surfing and know a thing or two about the ocean, NCJ arts and features editor Jennifer Fumiko Cahill figured I should be the one to review 47 Meters Down: Uncaged. You could provide a fact check, she said. Set everyone straight on sharks, she said. I had no idea about the movie she was referring to but I'm heading on a surf vacay to Tofino next month and could use some extra cash for wax, so hey, why not? And then I looked up the movie and asked her if I could review Good Boys instead. (Look, if you've seen the trailer for 47 Meters Down: Uncaged and have thought to yourself, "That looks like a fun way to spend a chunk of my life that I will never get back," then you and I would need to find other things to chat about than movies anyway.)

So on to Good Boys, to which my 23-year-old son accompanied me. Look, for all my flaws as a parent, the fact that my adult child not only cheerfully joined me for the movie but thoughtfully discussed it afterward means I must have done something right. Right?

For the unfamiliar, Good Boys is a coming-of-age movie about a trio of preteen besties — the "Bean Bag Boys" — who embark on a sort of heroes' journey together. Bean Bag Boys do everything together. The goal? They must learn to kiss before attending a "kissing party." The prize? For Max (Jacob Trembley), a chance to consummate a crush with Brixlee (Millie Davis), the girl he's puppy-eyed over. The obstacles? Hannah (Molly Gordon) and Lily (Midori Francis), two teenage girls in pursuit of the boys after a drone-spying attempt goes horribly awry.

And the modern-day factor infuses the movie from start to finish. In the fictional middle school, the Student Coalition Against Bullying (SCAB) stands at the ready to protect any kids who might be harassed, a component deployed with such perfection that both my son and I folded over in our seats with laughter. Instead of our hormone-dazzled hero ogling pretty Brixlee in a series of cliché hot-girl vignettes, his admiration for her plays out over far more endearing — and hilarious — scenarios. In contrast to The Sandlot's pool scene, in which a geeky tween fakes drowning in order to trick the sexy teen lifeguard into giving him mouth-to-mouth, when the boys in Good Boys decide to practice kissing on a "CPR doll," Lucas stops Max mid-lean to remind him to ask for consent. Good boys, indeed. (For the record, I love The Sandlot despite that particular scene.)

Further hammering home the respect-women narrative, when Hannah and Lily realize the boys have been spying on them with the drone, they warn them "Time's up!" and scold them for being misogynists. In an example of the film's ongoing joy at how kids misinterpret and misuse adult language, Max cries, "I'm not a feminist! I love women!" But Hannah and Lily are far from being killjoys — sure, they might want to kill the boys for various legitimate reasons, but only because the boys' meddling has interrupted their girls' weekend. They also provide one of the movie's deepest moments, easy to miss, about why kids form friendships, an observation that evokes an emotional and heartbreakingly panicked response from our young protagonists.

And the Bean Bag Boys are down with feelings. They cry in public, share how much they mean to each other, articulate when emotions conflict with the sort of clarity that suggests they'll never need marital counseling and would be horrified at having to retreat into a man cave. Instead of stereotypical homophobic or sexist insults, a sick burn from a Bean Bag Boy arrives in the form of, "Everyone knows your mom plagiarized a cookbook!"

Not every joke lands, sure. But the ratio is high enough that my cheeks hurt from giggling, a welcome break from the current world writ large. After the movie, my son and I debriefed. He appreciated the blend of child and adult humor. But was it realistic? I asked him if it reminded him of when he went to Sunny Brae Middle School. Some of it, he said, especially the parts when the kids were trying to be cool but mangling the concept. And how what passes for cool in middle school doesn't always translate up. We reminisced about those days and, like the Bean Bag Boys, I experienced feelings. Props to Good Boys for leading us into laughter and something more. R. 89M. BROADWAY, MILL CREEK, MINOR.

THE NIGHTINGALE. Writer/director Jennifer Kent's brutal drama about the violent colonization of Australia, following the trials of an Irishwoman prisoner (Aisling Franciosi) and the Aboriginal man (Baykali Ganambarr) who aids her. R. 136M. MINOR.

READY OR NOT. The honeymoon is over when a bride's (Samara Weaving) new in-laws rope her into hide and seek to the death. R. 95M. BROADWAY, FORTUNA, MILL CREEK.

THE ART OF RACING IN THE RAIN. Racing as a metaphor for life. As told by a dog. Voiced by Kevin Costner. PG. 109M. BROADWAY.

BLINDED BY THE LIGHT. A British Pakistani aspiring writer (Vievek Kalra) finds himself through the music of Bruce Springsteen, to the consternation of his family and friends, who clearly need to listen to more Bruce. PG13. 117M. PG13. 134M. BROADWAY, MILL CREEK.

THE FAREWELL. Lulu Wang's beautiful, understated drama about a Chinese family's decision to lie to their matriarch (Shuzhen Zhao) about her terminal cancer is a generous look at how lies create bonds and barriers between us. With excellent performances by Awkwafina, Shuzhen Zhao and Tzi Ma. PG. 98M. BROADWAY.

FAST & FURIOUS PRESENTS: HOBBS AND SHAW. A Fast and the Furious spin-off with an unlikely alliance. Is it OK for me to root for the bad guy (Idris Elba) in this one? PG13. 134M. BROADWAY.

THE LION KING. An impressive CG remake with a star-studded cast, but all the technical achievements and orchestrated moments lack a little life. Starring Donald Glover, Chiwetel Ejiofor and Beyoncé (please don't tell her we didn't love it). PG. BROADWAY, FORTUNA, MILL CREEK.

ONCE UPON A TIME ... IN HOLLYWOOD. Quentin Tarantino recreates 1969 Los Angeles for a deceptively nuanced though bloody as ever movie about a washed up actor (Leonardo DiCaprio), his stuntman (Brad Pitt) and the murder of Sharon Tate (Margot Robbie). R. 165M. BROADWAY, MINOR.

WHERE'D YOU GO, BERNADETTE? Cate Blanchett stars as an architect-turned-homemaker who runs off to work in Antarctica for her second act. PG13. 130M. BROADWAY, MILL CREEK, MINOR.