The Comedy of Errors at NCRT 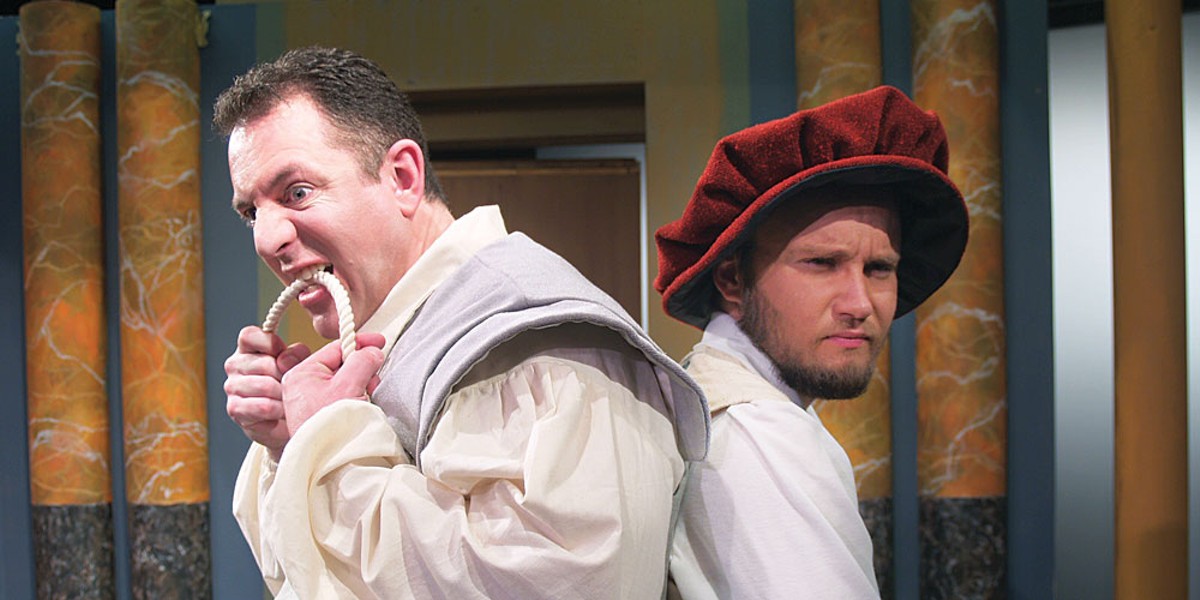 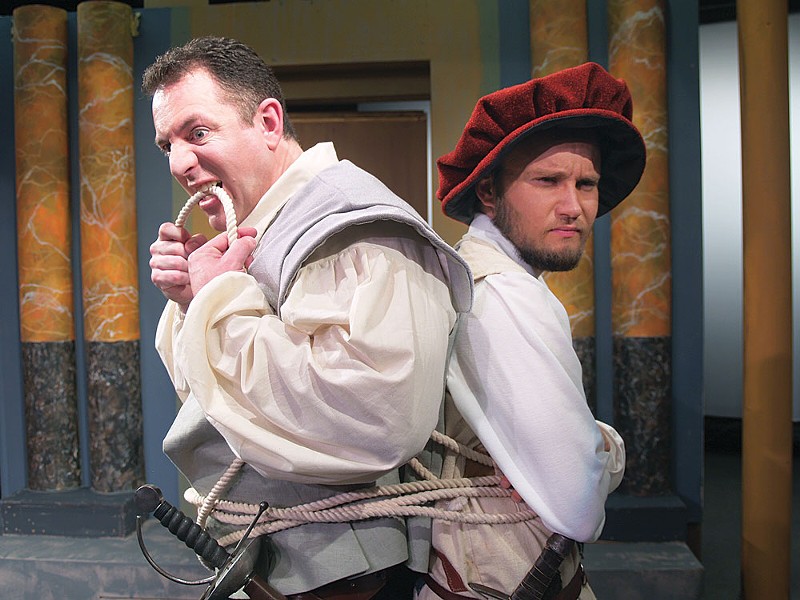 Courtesy of NCRT James Wright and Cameron Griffis are fit to be tied.

Shakespeare's The Comedy of Errors is an unsubtle tale of mistaken identity. It's one of the Bard's more accessible plays and one of his few true farces. Staging Shakespeare is challenging for even top-tier theater companies, but North Coast Repertory's production pushes a lot of the right buttons for a family-friendly, though slightly naughty, night out.

Two sets of identical twin brothers — one pair the sons of a wealthy trader, the other pair acquired from a poor woman to be the boys' servants — are caught up in a storm at sea. The trader, Egeon, together with one son and one servant-boy, is rescued by one boat; his wife Emilia, with the other two boys, is rescued by a different boat. Neither group saw the others again — or so they thought. ...

Fast-forward a few decades and Antipholus of Syracuse and his servant, Dromio of Syracuse, have set off in search of their long-lost brothers. When they do not return, Egeon sets off after them. As chance would have it, all three fetched up in Ephesus, where those long-lost brothers, and Egeon's wife, have been happily living their own lives, oblivious to their missing alter egos. Much confusion ensues, involving suspected (and actual?) infidelities, misplaced money and jewelry, missed meals, purported witchcraft, new loves, multiple arrests and the threat of execution.

The play opens with Solinus, Duke of Ephesus (Ed Munn), accusing Egeon (Scott Osborn) of illegally trading in Ephesus. Osborn is clearly at home with the language, and creates a powerful image of the storm that tore his family apart and brought him to Ephesus — so powerful that the addition of lighting and sound effects to reinforce the sense of the wind and water are really not needed. When taken alongside this exceptionally strong performance, Munn's portrayal of Solinus seems rather disengaged — unexpectedly so, given the number of Shakespearean roles the actor has taken on over the years.

But this initial weakness quickly fades as Antipholus of Syracuse (Montel Vander Horck) bounces onto the stage with quick wit, great timing and an excellent grasp of Shakespearean wordplay. Vander Horck is more successful in his portrayal than James Wright as brother Antipholus of Ephesus, whose verbal gymnastics were more ponderous — in stark contrast with his manservant Dromio of Ephesus (Cameron Griffis), who brings an infectious sense of fun to the role, as does Lucas Hylton as Dromio of Syracuse. Both Griffis and Hylton effectively incorporate physical comedy and verbal agility into their performances, and the production team creates a more visually similar pair with the Dromios than with the Antipholuses (or should that be Antipholi?). While recognizing it's hard to find pairs of physically-similar actors in our small pool of local talent, and even harder to find two who can do Shakespeare convincingly, Wright and Vander Horck are a little too physically dissimilar to make the most of some of the sight-gags.

Providing the essential love interests are Adriana (Jennifer Trustem), wife of Antipholus of Ephesus, and her sister Luciana (Rosalyn Long). Trustem is clearly comfortable with Shakespearean language and brings an effective vivacity to the role, with just the right combination of emotion and skepticism to carry her through the husbandly confusion. The same can unfortunately not be said of Long, who seems to be interpreting Shakespeare through a Valley Girl filter, leading at least this reviewer to imagine that she, not her brother-in-law, was the long-lost relative from a distant place.

Willi Welton puts in a strong performance as the abbess of Ephesus (and estranged wife of Egeus), who unintentionally brings clarity to the confusion and unity to the families, enabling everyone to live happily ever after. Rounding out the cast are the ever-popular Pam Service as the exorcist Dr. Pinch and an Ephesian merchant, Bob Service as a witty but rather creaky law officer, Ariel Bridges as the creatively coiffed courtesan, Zoe Osborn as Luce the kitchen maid, Bill Welton as the goldsmith commissioned by Antipholus of Ephesus to produce a piece of jewelry, and David Simms and Caleb Haley as merchants of Ephesus.

Director Alex Service keeps the action moving along at a lively pace, and successfully expands the NCRT's limited performance space by making creative use of the aisles; however, the introduction of hand puppets into a couple of the scenes, while entertaining, does not add to the story. Liz Uhazy's design pays tribute to the play's origins in Italian Commedia and, setting aside the unnecessary storm effects, David Tyndall's lighting and Michael Thomas's sound designs carry the play smoothly through its two hours of hyperactivity. Bethany Lamoureux does an excellent job with the costumes, which also nicely reflect the feel of Renaissance-Commedia.

The Comedy of Errors plays at North Coast Repertory Theatre through April 16 with performances Fridays and Saturdays at 8 p.m. and Sundays at 2 p.m., as well as Thursday, April 14 at 8 p.m. Call 442-6278 or visit www.ncrt.net.

Shakespeare and puppets is a thing. Witness the two-person King Lear staged at Dell'Arte's Carlo Theatre with an army of puppets commanded by Conrad Bishop and Elizabeth Fuller on April 8 and 9. Call 669-5663 or visit www.dellarte.com.

Leave the kids at home for Bat Boy the Musical. The Weekly World News-inspired tale of pointed prejudice and pointed ears opens at Ferndale Repertory Theatre with a preview on April 14 and plays through May 7. Call 786-5483 or visit www.ferndalerep.org.