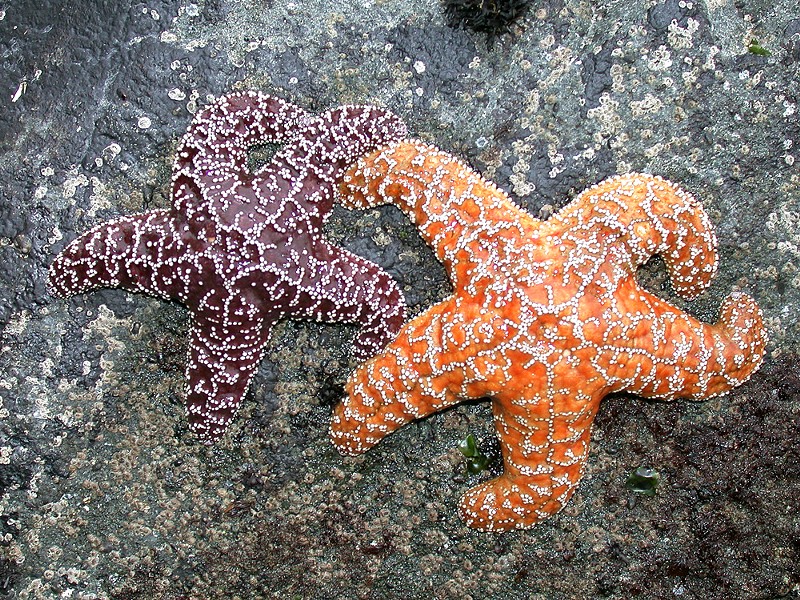 Photo by Julie Kelly The white spot on this ochre star is the madreporite.

My superpower is that I can fly. So I fly around identifying washed-up sea creatures for arguing beachgoers. I am called Flydentifier.

For example, I once swooped in on a bickering honeymoon couple. He still wore his tuxedo and she was in her gown carrying her fancy shoes.

He said, "It's a goddamn STARFISH!" And she said, "Stick that SEA STAR up your ass!"

I hovered over them and said, "Hello there! Allow me to settle your imbroglio. You see, 'starfish' is the generally accepted name for this animal but most scientists prefer 'sea star.' This dead one you found is the species Pisaster ochraceous — the ochre star." As always, they were stunned and the situation was deescalated.

Actually, it was only momentarily deescalated before re-escalating toward me. The groom took a swing at my dangling feet, but I floated like a butterfly out to some nearby rocks and yelled back, "That ochre star probably lived out here where it fed on mussels and barnacles! They resist the surf by grasping rocks with hundreds of hydraulically powered tube feet on the undersides of their five arms!"

The newlyweds threw seaweed and wet sand at me. I zig-zagged above them explaining, "The ochre star you found may have been sick and lost its strength, or maybe a stochastic event like being hit by a drift log knocked it loose. No matter what though, it's a nifty find for you!"

The bride hocked an enormous loogie and spat it right between my eyes. Apparently that is her superpower.

"You may be fascinated to know," I shouted down to them, "that the ochre star can eat a mussel without having to fully open it. It just needs the narrowest slot to slip its stomach through and it digest the mussel within its own shell!"

The groom pulled out his phone to livestream our discussion. He narrated: "Look at this flying psycho telling us about sea stars! Should I shoot him? Vote yes or no in the chat section."

I was pleased that he called it a "sea star" rather than a "starfish." We were making progress. So I added, "That disease I mentioned could possibly be the so-called sea star wasting disease. You may have heard about it. Seems to have wiped out the sunflower star Pycnopodia helianthoides locally but many ochre stars survived!"

The groom told the bride, "I have over 100 votes for shooting him but I forgot my gun. Got any other ideas?"

I said, "And you may notice that ochre stars come in a variety of colors. There are brick red, orange, brown, purple and yellow ones! Scientists aren't sure what causes the variety, though it may be genetic and/or dietary. But does being different colors actually matter to them? Nobody knows! Isn't that exciting?"

The bride and groom whispered together. It was encouraging to see them collaborating. Perhaps one more interesting fact would save their marriage.

"Speaking of color, did you know that ochre stars often have a type of scale worm living on them? And the worm's color and texture often match the sea star so perfectly you can hardly even see it. They appear to have a mutually beneficial relationship — just like you two!"

The groom waved me down to examine something on the dead ochre star. I hovered cautiously lower. He seemed calmer and ready to have an intelligent discussion. I said, "Oh that little spot is called the madreporite. It's where the sea star takes in water to power and regulate its hydraulic system."

The bride snuck up and beat me unconscious with her fancy shoes.