Segway to the Marsh 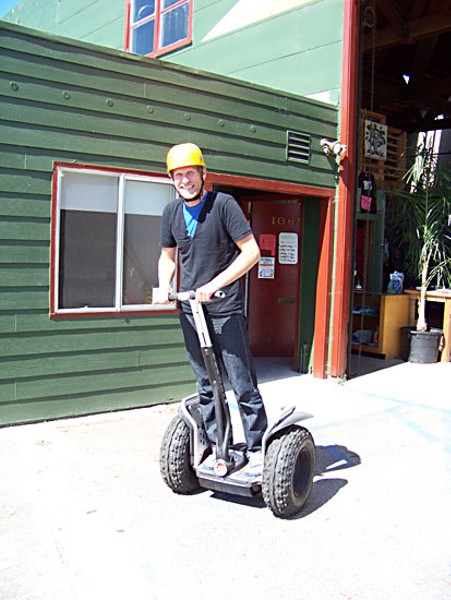 Jon O'Connor's a little bemused that some people are freaking out on a local birding blog about his proposal to run Segway tours in the Arcata Marsh and the Arcata Community Forest.

Yes, Segways. Those electric gizmos you stand on and lean where you want to go.

"I wish they'd talk to me," O'Connor said on Tuesday afternoon at his office inside the Far North Climbing Gym on 10th Street in Arcata. When he saw the blog chatter, he said, he got "just a sinking feeling. It sucked to be trying to do something positive for the community and hear that people were upset about it."

O'Connor is the chief executive officer of North Coast Adventure Centers, a co-op whose mission is, as their motto says, "connecting the North Coast community, one adventure at a time." The NCAC has formed partnerships with local businesses such as Revolution Bikes, Redwoods and Rivers Rafting Co. and the Far North Climbing Gym -- where O'Connor has his office -- to take people on mountain biking, rock climbing, tree canopy and river adventures. The company also trains and certifies outdoor adventure guides.

"Right now we're developing a program with [Humboldt County's] Court & Community Schools to have vocational training for kids, some of them just coming out juvenile hall, where one day a week they can come to the gym and rock climb, and once a month they can take part in an adventure. We'll try to sign kids up to become nationally certified guides, and hopefully send them all over the world to work."

O'Connor has had a contract with the City of Arcata for about two years to run a ropes course in the forest, in a "public-private partnership." In April, the Arcata City Council approved NCAC's proposal to expand the agreement to run a pilot tour-by-Segway program.

About 10 days ago the birding people got a whiff of this plan. On Sept. 11, Tom Leskiw posted a detailed message on the Northwest Cal Bird blog titled "Scooter Use at Arcata Marsh." He worried that motorized vehicle use is not allowed in the marsh, so Segways might violate that regulation; that Segways are silent and pedestrians might not hear them approaching from behind; that Northwest Adventures and their clients would be the only ones allowed to take the scooters into the marsh and forest; and that the marsh would cease to be a wildlife "sanctuary."

A fellow birder responded, "Criminy! What a stupid idea. Is Arcata selling its soul to corporate interests?"

And another birder wrote, "If Segway tours get a concession I'm going to change my favorite place to bird to my back yard. Or maybe even HBNWF [Humboldt Bay National Wildlife Refuge], even if I DO have to drive farther. grrrrr."

On the phone Tuesday, Leskiw added that he doesn't think Segways, contrary to how they're promoted, are "green."

"They're more in keeping with our mania for motorized recreation," he said. "Ability-impaired people will not be able to use it, because it takes strong arms and legs to be on one. And so what a Segway says, is, 'There is no need to walk.' It's encouraging people to stop walking, which will contribute to obesity."

O'Connor counters Leskiw's arguments. Segways are legal on trails, he says. The California Vehicle Code classifies the Segway as an "electric personal assistive mobility device," which falls under "pedestrian" use and includes motorized tricycles and wheelchairs. He says an electric Segway is a heckuva lot eco-friendlier than a gas-using car.

"The Segway is not designed to replace walking and bicycling," he said. "It's designed to replace the short commutes people do every day in a car, the one- to three-mile commutes. Also, Segway is buying carbon offset credits for the life of each [Segway]. Look, we're a company that's taking people out climbing trees, riding bikes, rafting rivers, climbing rocks -- we're not promoting obesity! The question is, how do we engage the population that doesn't want to climb a tree, or ride a bike, or walk very far?"

The Segway tours in the marsh and forest, he said, would get people into those areas, appreciating and caring about nature, who otherwise might not want to go if they had to walk or ride a bike in. It's a tourism boost, he said. Also, anyone can ride a Segway into the marsh or forest now -- it's not exclusive to NCAC.

Another worry he's heard is that Segways are fast and kick up dust. O'Connor said the Segways would be in "turtle mode," set to go up to six miles per hour. Even in their faster mode, the ones he'd use only go 12 m.p.h. "A bike can go faster and people can run faster than 12 miles per hour," he said. "And bikes make dust, too."

Heather Stevens, the City of Arcata's recreation manager, said on Tuesday by phone that the Segway program is still being formed.

"The council approved the Segway tours in concept," Stevens said. "Now we're going to various groups and committees to determine routes. There are no routes that have been approved yet."

O'Connor said if people really don't want Segways on the marsh trails, then he won't send tours there.

O'Connor and city officials will be at the next Friends of the Arcata Marsh board meeting, on Oct. 8, to talk about the proposed Segway tours and listen to people's concerns.