Self and Society: Studies in the Evolution of Culture 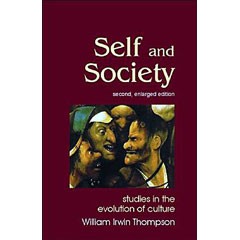 Self and Society is an oddly vanilla title for the guy who wrote At the Edge of History, Evil and World Order, Coming Into Being and The Time Falling Bodies Take to Light. William Irwin Thompson burst on the scene in the early 1970s as a counter-cultural intellectual and later a boundary-crossing New Age synthesist of history and future, art and science, media and Gaia. For almost 40 years, Thompson has been one of those few writers and speakers that an intelligent and otherwise eclectic and self-defined public looks to for illuminating ideas about what's really going on in this mixed-up world, and therefore what's to come. This new and expanded edition of Self and Society is a cumulative summary of his latest thinking.

His ideas are bracing (though sometimes maddeningly abstruse), especially for those immersed in the supposed intellectual mainstream. For example, though he writes about physical and cultural evolution, he finds a lot of trendy evolutionary psychology reductive and misleading. But in this brief review we'll concentrate on what he sees as today's nascent patterns, moving into the future.

Thompson sees the growth of a planetary culture over the past century, still defining itself. But this is not some gauzy New Age vision. "So when I am writing about the emergence of a new post-religious spirituality that is resonant with science" (exemplified by the Dalai Lama)..."I am perfectly aware that I am living in the ‘sunset effect' time of Osama bin Laden and Jerry Falwell."

Cultural transformation is complicated not only by conflict but by the tendency to "become what we hate," (for instance, torturers). Thompson concludes that "if we're lucky" we may avoid a downslide into a dark age "that could last for centuries" before the new "noetic" future might emerge. That luck would be in avoiding self-annihilation by any combination of ecological and economic catastrophe and weapons of mass destruction.

At times he sees this "luck" as very unlikely, and seems resigned to a civilizational apocalypse. Even in our gigabyte-giddy, electronic denial, he's hardly alone in this analysis, especially in the darkening decades from Reagan through G.W. Bush.

But in his last chapters -- blog entries about the 2008 presidential campaign -- his hopes are raised by the election of Barack Obama. Thompson writes: "He stood in the moment in which yesterday becomes tomorrow as an entire epoch comes to an end... So yesterday is an age ago, and if tomorrow is filled with new challenges and crises, at least the whole world can now look to them with a new face."