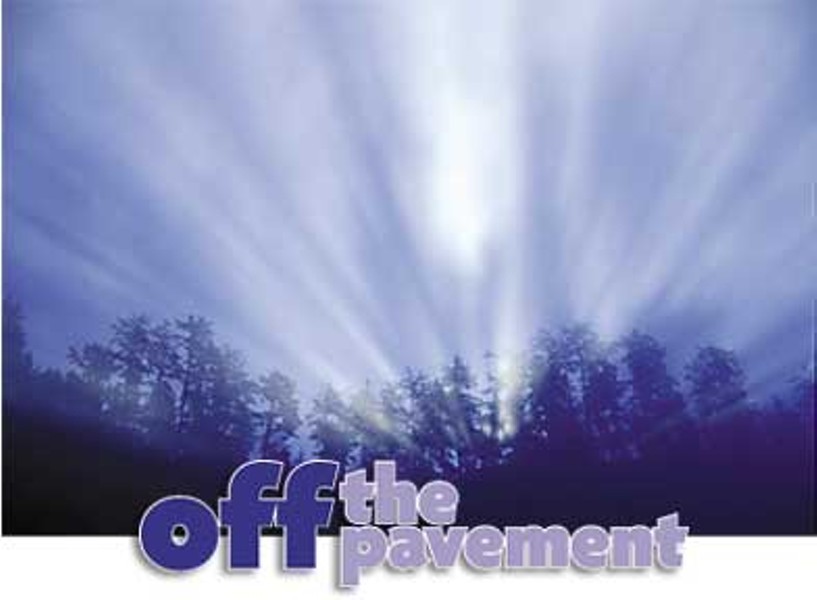 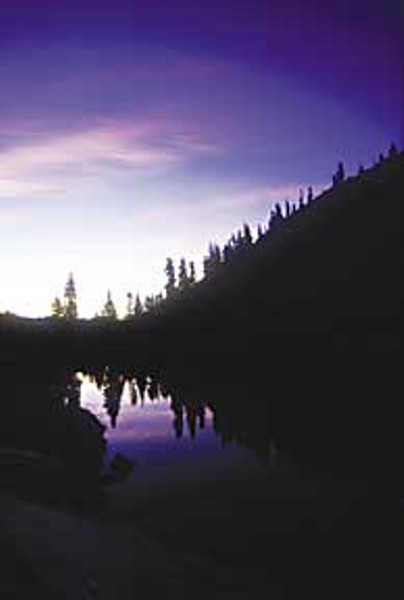 "Serendipity is looking in a haystack for a needle and discovering a farmer's daughter."

Looking for a change of pace last month, my wife and I opted to sleep on the marble slab called a futon instead of our comfy bed. I was awakened after dawn by her exclaiming, "Oh! That's why we slept here." A double-rainbow was blazing over the bay - a sight we would never have noticed from our bedroom window with the azaleas hiding the view.

What am I rambling on about this time? There is a kind of providence that is most rewarding that becomes strangely accessible, often when you think your luck may be turning for the worse. The trick for me is staying perceptive and positive enough to notice it. Other times, and most often when I am outside and off the pavement, these epiphanies just jump out in front of me demanding my full attention.

Oh! That's why I took a chance and rode on my bike several miles down this unmarked trail at dusk. I uttered this after I had just locked eyes with an inquisitive coyote. A staring contest without malice or fear - head-tilting curiosity as we summed each other up and finally went our separate ways.

I find these moments tend to occur when I put myself in a good position to view them, physically as well as temporally. Like sunrise and sunset, when change is promised. Shadows lengthen, colors deepen, contrast and contour heighten - and then slowly it all bleeds away again. The beauty of impermanence held for a moment when the alpenglow burns like a raging fire. Like those incredible Tibetan mandalas of colored sand that dazzle with grand intricacy and are then brushed away into memory.

The angle of sunlight, clouds and fog, refraction of light through water and a massive alpine, forest or coastal canvas to brush them over. Some years ago I nearly crashed the car as we sped south down Highway 395. Through my rear-view mirror I had just glimpsed a crazy crimson sunset over the Eastern Sierra. My ex-wife eyed me curiously and said flatly, "You see one sunset you have seen them all." I found this to be somewhat irreconcilable. This lack of appreciation has been somewhat subverted judging by her newfound wanderlust.

Two days ago, against my better judgment, I offered to meet friends on top of a vertical granite cliff that took them three days of non-stop climbing to top-out on. They slept in a hanging tent they hauled up with them and fastened by two expansion bolts to the cliff face. I knew they would be mentally and physically devastated and would appreciate the help to carry their gear that weighed in at nearly 150 pounds down Yosemite's treacherous North Dome Gully - a nerve-shattering, scree-filled, mossy, wet, exposed granite sluice that is roughly equivalent to spending four hours trying to stay upright on roller skates while juggling a bowling ball and a crowbar.

I had to hike up the "descent" route the day before by myself (the climbing guidebook warns that NDG is "the scene of many accidents.") I was likely one of the first to hike it this year, as it had been under several feet of snow until just a few days before. I lost the rock cairns marking the indistinct and non-existent trail a number of times and got myself cliffed-out and had to backtrack, crashed through skin-puncturing manzanita and face-planted traversing over pine needles on 70-degree slabs.

Exhausted, seemingly regurgitated and cast free by the wall that had gathered them up nearly 72 hours before, my wife Dana and climbing partner Ben ceased being the black dots I had come to know them as and literally belly-flopped onto the summit at sunset. I would like to say it was worth all the scary hiking when by headlamp I saw their faces break into smiles as I brought out of my backpack a surprisingly unbroken bottle of champagne and the apple pie. In actuality it was the bedding down on a tip of a 1,500-foot tall shark's fin of granite, with nothing but black space sprinkled with thousands of stars from the edges of our sleeping bags up. The imposing features of Half Dome and El Capitan were now shouldered up against us instead of bearing down on us. Shooting stars soared overhead into an impossibly silent night.

I lay awake for several hours inhaling the night like it was the most alluring scent ever and I never tired of filling my lungs with a beauty so intense it made my heart ache. To share such a magical night and in such an incredible location with your two best friends had me saying Oh! once again.

But I think the real secret to the Oh! is that it is there all the time. A punchy scorpion in the backyard woodpile fluorescing under a black-light. A hundred trillium lining the edges of a forest trail. A kestrel hover-hunting over the marshy freeway median. The organic, duffy smells of a redwood forest during a misting rain as you trip over wet ferns. The sound of thunder and trees swishing in the wind as the leading edge of a storm pushes through. The reflection of the sun on a windless evening as it heads into the bay.