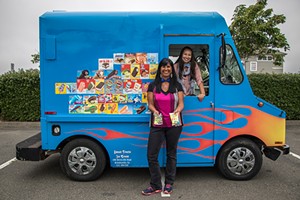 For many children in Arcata and McKinleyville, the first harbinger of spring isn't a shift in the weather or fresh flower blooms unfolding on shrubs just waking up from a winter slumber.

Instead, the heralding of a change comes in the form of a robin-egg blue ice cream truck with flames melding from yellow to red painted on the sides that returns to their neighborhoods like clockwork each April.

Behind the wheel is McKinleyville native Paula Tweedy, who has been signaling her arrival for the summer season with tunes like "The Candy Man" ringing through the streets for nearly two decades.

There to greet her are gaggles of youngsters, dollar bills clutched in their tiny hands. But, that's not to say that kids are the only ones who look forward to seeing her.

"I think sometimes the grownups are just as happy about me coming as the kids are," she says.

Paula's road to becoming Humboldt County's first ice cream truck owner was paved by a matter of chance. She was visiting relatives in Coeur d'Alene, Idaho, when she noticed little kids standing along the road.

When she was told they were waiting for the ice cream truck, Paula joined the group.

"My kids had never seen an ice cream truck," she says.

When Paula found out the owner had another truck for sale, something clicked. A stay-at-home mom with two young ones at the time, the truck seemed like a fun, family-friendly way to make a little extra money.

A short time later, her husband loaded the truck on a trailer and drove the small, van-like vehicle all the way back to McKinleyville. Her husband set about fixing the truck up and eventually they settled on the current design — decorated to resemble a race car.

"I wanted it to look cool," Paula recalls.

When not driving her regular routes, Paula also brings her truck to private gatherings and community events, including Wildwood Days in Rio Dell later this month. Over the years, she's become a community fixture in her own right.

Paula says she is still often asked about what happened to the little girl — her now pregnant 24-year-old daughter Alyssa — who began working as her helper 16 years ago and did so until her teen years made the job lose its luster.

And sometimes she's stopped by young men, their once boyish faces now obscured by mustaches and beards, who want to know if she remembers them.

The best part of the job, she says, is watching the children she once delighted now bringing their own children to enjoy the simple pleasure of buying ice cream from her truck.