A beloved fable gets turned into another glossy Hollywood love story 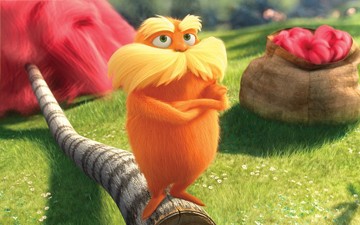 THE LORAX is one of Dr. Seuss' best. Like everything he published, it's clever and fun to look at, but it stands apart for the strength and resonance of its themes. It's a fable about conservation, the risks inherent in the profit motive, and the importance of each of us sticking up for what's right.  Unfortunately, almost everything about this adaptation undermines those themes.

To start with, Ted (Zac Effron), the story's young protagonist, takes center stage. He lives in a city that corporate greed created, a plastic would-be wonderland where "nature" is a thing of the past. His nemesis, the diminutive proprietor of a clean-air sales company, is avarice embodied, but he's too silly to be sinister. Because the girl of Ted's dreams (Taylor Swift) wants to see a tree, Ted visits the Once-ler (Ed Helms) who tells the story of the Lorax (Danny DeVito). Ted's motive is a selfish one, and doesn't fit the tone of the book.

As the two stories unfold, the narrative shifts awkwardly between flashback and present-day. Most of the scenes don't add anything to the story. They just showcase animation that, though intermittently lively, eventually gets tiresome.

The main shortcoming of The Lorax is that it manages to make a brisk and compelling story boring. The bears and fish are cute enough, and DeVito has a few funny flourishes, but the story's importance is buried under misfired musical numbers and overlong sight gags. For my taste, the filmmakers would have been better served to focus on story, and use a simpler, old-school animation approach. While it's lush and pretty, the Thneedville of their imaginings lacks the depth and sensitivity of the source material.

That conflict is ultimately the movie's undoing; by the end, when the human spirit has triumphed, the resolution is unsatisfying. Because Ted was only in it to get the girl, and the middle act drags on like it does, the conclusion -- when everybody suddenly GETS it -- feels rushed and false. Judged on its own merits and as an adaptation, The Lorax misses the point. PG. 86m. In 3D and 2D at the Broadway and Mill Creek, 3D only at the Fortuna.

PROJECT X. Remember that insane house party in high school? The one where everything changed, nobody had any inhibitions and social mores were permanently abandoned? The one with multiple DJs, an angry dwarf and topless girls in a bouncy castle? I don't remember that party either, but for decades now filmmakers have been creating them for every generation of hopeful, deluded teenagers about to make their way into "the real world." And the class of 2012 gets Project X.

First off, it barely has a plot, being essentially a long-form music video for contemporary dance mixes. The arc of the story is this: Will we be able to pull off this party? Will everybody show up? Will they respect the rules of the house? How extensive will the property damage be? What will the cops do when they are inevitably called? When are we gonna get laid, already? Will there be any real consequences? (I added that last one. I don't think the writers really cared.)

Second, and more troubling, is that Project X pretends to be another found-footage documentary. This Hollywood tendency is rapidly displacing 3D as my least favorite gimmick. In this case, I suppose the aesthetic of terrible, nauseating handheld camerawork at least suits the subject matter. But it still strikes me as lazy and uninspired. There are a few nice-looking photographic compositions hidden among all the shaky-cam vomit shots and dry-humping, but they come off as accidental. Because they demonstrate some proficiency and care, they only disrupt the narrative flow (such as it is). Plus, how are we expected to believe that somebody took the time to edit together footage from what seems like dozens of flip-cameras to make a feature-length documentary, then just happened to lose the final cut? I realize it's just a marketing ploy, but I can't let it go.

Thirdly, this movie attempts to set a new standard for ultimate-party stories. For that, I'll give the filmmakers their due. Just a few minutes in, it becomes clear they're going to take it way over the line. The angry dwarf gets stuffed in the oven, the ceramic gnome (spoiler) is full of ecstasy, and a psychotic drug dealer torches the neighborhood with a flame thrower. That's all well and good, except that nobody ever acknowledges how close to real mayhem things are getting. There were a few instances when the throbbing beat of the soundtrack, the freaky handheld camera-work and the utter chaos made me think I was about 30 seconds from turning the corner into Gaspar Noe territory. Thankfully, things never get that dire. But at the same time it's disappointing that things never feel dangerous at all. Despite all the water and fire damage and wanton craziness, nobody has to pay.

By the end we're left with this: Even if you're uncool, throwing a mind-blowing party will change your life for the better. The hottest girl in school will throw herself at you, the equally gorgeous girl-next-door who digs you will forgive your indiscretions, and your dad will admire your chutzpah while his CLS 55 gets hoisted out of the pool. Everything will be awesome, forevermore. R. 88m. Everywhere but the Garberville.

JOHN CARTER. From the director of Finding Nemo and WALL-E comes the mega-budget story of a Civil War vet transplanted to Mars, where he must battle 12-foot-tall barbarians, rescue a princess and wear a loin cloth. PG13. 132m. In 3D and 2D at the Broadway and Mill Creek, 3D only at the Fortuna.

SILENT HOUSE. A young woman finds herself sealed inside her family's secluded lake house, unable to make contact with the outside world. Things go bump and she freaks. Promo materials say the movie appears as a single unbroken shot. R. 98m. At the Broadway.

A THOUSAND WORDS. Eddie Murphy pisses off a New Age guru who gets revenge via a magical Bodhi tree: Every time Eddie utters a word, a leaf falls off, and evidently a naked tree means a dead Eddie. PG13. 91m. At the Broadway.

WHO BOMBED JUDI BARI? This locally made documentary chronicles the fallout of the 1990 car bombing of Southern Humboldt Earth First! activists Judi Bari and Darryl Cherney. For more, see the Calendar section. 93m. Runs Tuesday through Thursday at the Garberville.

The monthly Ocean Night benefit at the Arcata Theatre Lounge arrives again Thursday with Salmon: Running the Gauntlet, a documentary from PBS' Nature series that investigates both the collapsing Pacific salmon populations and humans' often boneheaded attempts to intervene. 6:30 p.m.  Friday night strikes a markedly different note with Army of Darkness (aka Evil Dead III), Sam Raimi's whacked-out, horror-comedy cult classic from 1992. R. 81m. 8 p.m. More wacky yuks arrive Saturday with Super Troopers (2001) -- essentially Police Academy for stoners. R. 100m. 8 p.m.  The ATL's movie marathon continues Sunday with An American Tail: Fievel Goes West (1991), the family-friendly cartoon sequel about a mouse who, er, goes west. G. 75m. 6 p.m. And finally, we can't forget Sci-Fi Pint and Pizza Night next Wednesday featuring Troll 2, widely regarded as one of the worst movies ever made (and the subject of the 2009 documentary Best Worst Movie). That turd will be followed by Attack of the Giant Leeches (1959, and pretty self-explanatory). The fun starts at 6 p.m.

GHOST RIDER: SPIRIT OF VENGEANCE. Nicolas Cage stars in this moronic, action-packed sequel centered on Johnny Blaze, a motorcycle-driving stuntman who sold his soul to the devil. PG13. 95m. At the Broadway and Mill Creek.

GONE. Bug-eyed beauty Amanda Seyfried sets out to save her sister from the serial killer who abducted her two years prior. PG13. 94m. At the Broadway.

JOURNEY 2: THE MYSTERIOUS ISLAND 3D. Dwayne "The Rock" Johnson leads a family-friendly adventure to the isle of 3D effects. Jules Verne barfs in his grave. In 3D and 2D at the Mill Creek, 2D only at the Broadway and Fortuna.

SAFE HOUSE. An otherwise generic CIA thriller gets a lift from Denzel Washington's charisma. R. 115m. At the Broadway and Mill Creek.

THE SECRET WORLD OF ARRIETTY. From Japan's Studio Ghibli comes a whimsical adaptation of The Borrowers. This simple, animated tale of Lilliputian scavengers offers timeless delights. G. 94m. Through Monday at the Garberville.

THE VOW. After a car accident, a woman loses all memory of her husband, so he has to woo her anew. PG13. 104m. At the Broadway.