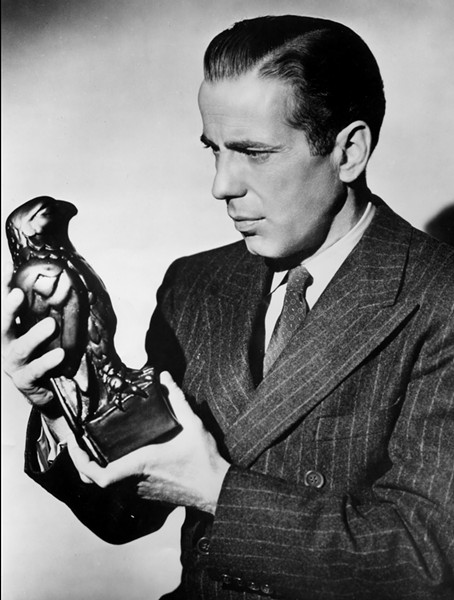 Shadows and Fog: San Francisco Noir is the theme for the Humboldt County Library's Based on the Book movies series in April. Each Tuesday there's a screening of a 1940s era crime film shot or set in the fabled Bagdad by the Bay.

First up, April 9, the quintessential detective story, The Maltese Falcon, based on the novel by Dashiell Hammett. Humphrey Bogart stars as private eye Sam Spade, hired to find a missing woman, sidetracked by the murder of his partner and mixed up with a femme fatale (Mary Astor) and some colorful crooks (Sydney Greenstreet and Peter Lorre) on the trail of a precious statue. Yours truly serves as host, introducing the film and leading a post-screening discussion.

On April 16 it's The Lady from Shanghai, a twisted tale about a wicked seductress (Rita Hayworth) involved in a fake murder plot with a sailor (Orson Welles). Welles adapted Sherwood King's novel, If I Die Before I Wake; he also directed the film, famous for its climactic shootout in a hall of mirrors. Philip Wright is your host.

Series coordinator Michael Logan acts as host for Dark Passage on April 23. Bogart is back, co-staring with Lauren Bacall in a story based on a pulp novel by David Goodis. Bogie plays an escaped con hiding out in San Francisco with an artist (Bacall).

The series closes April 30 with Thieves' Highway from director Jules Dassin. Richard Conte stars as a truck driver up against a crooked S.F. produce market kingpin (Lee J. Cobb). The screenplay by A. I. Bezzerides was based on his novel Thieves' Market.

All screenings start at 6:30 p.m. at the Eureka branch of the Humboldt County Library, at 1313 Third St. No charge for admission. More details at co.humboldt.ca.us/library.