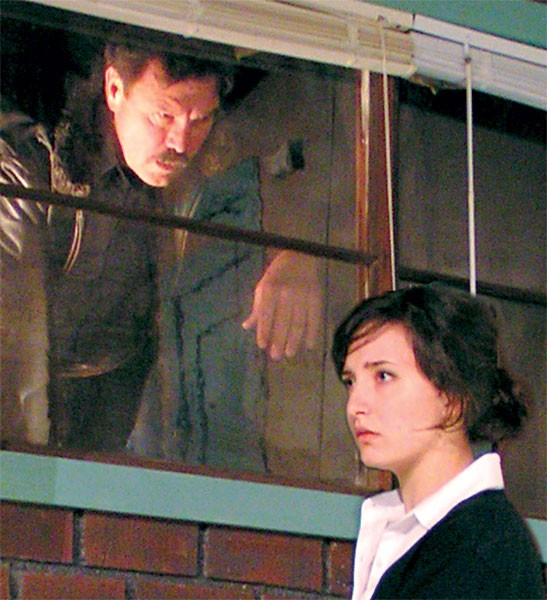 Tragedy, comedy, musical, historical-pastoral and all possible combinations crowd the stage, but one old standby -- the thriller, the suspense drama -- has mostly been ceded to movies and television, which have more ways to scare people.

That's the conundrum faced by Ferndale Rep in presenting the thriller Wait Until Dark, opening this Thursday (Feb. 11). Though this play by Frederick Knott began on Broadway, it's probably best known for the 1967 movie starring Audrey Hepburn as the young blind woman beset by strangers searching for hidden heroin.

The Hepburn movie is on the Bravo list for film's scariest moments, but how do you achieve that on stage, without quick cuts and lingering close-ups, cued by spooky music?

For the Ferndale production, director Jasper Anderton's answer is: Make it real. "The challenge was to make this as realistic as possible," he said in an interview last week. "That's how we hook people."

"The entire show takes place in a New York basement apartment. There are no scene changes, and this one place is all the audience sees." To add to the realism, the set was designed not by a stage designer, but by an architect, Brian Morrison. "He designed a basement apartment," Anderton said. "We devoted a lot of time to getting the details right."

Lighting is also kept as realistic as possible. "Otherwise I felt it would jump out at people if there was anything that didn't look exactly the way it was supposed to look."

Once the environment is convincing, the actors use it to complete the reality connection. "Theatre has an advantage in creating suspense," Anderton said. "It's easier to draw the audience into the reality when they see live people up there on stage. Then you can really get to know the characters, and you watch them slowly realize that things aren't what they seem to be."

Not that there won't be effects -- there's lightning and light bulbs breaking, as well as something like 32 different sound effects on a seven-channel mixing board. Light design is by Dell'Arte veteran Nick Trotter, and the sound mix is by Ian Schatz. Anderton is also intent on pacing the show for maximum impact. "In a thriller you really have to make sure the momentum stays up, and the tension stays tight."

The young blind woman coping with persuasions and threats is played by Alexandra Gellner. "Alex is a wonder to work with. She has instincts regarding what motivates her character that I haven't seen in many actors," Anderton said. "Besides Alex, we have stage veterans Gary Summer and Bob Beideman. The other half of the cast are actors in their first major roles: Tom Conlon, Ian Schatz and Ian's daughter, Brianna."

Audiences should expect tense and scary moments, as well as stage violence and threats of violence. Wait Until Dark plays at Ferndale Rep on Friday and Saturday evenings, and Sunday afternoons until Feb. 28.

There's scariness of another kind at the Arcata Playhouse, where Quake: A Love Story played last weekend so successfully that it's been held over for another two shows this weekend. It takes place in a steel-lined closet before, during and after a big earthquake.

Minnesotan Tyler Olsen got all shook up at the Arcata Co-op on 6.5 Day, so he spent the last few weeks doing what we all do in response to earthquakes: He wrote and staged a play about it. With songs.

Olsen and fellow Dell'Artisan Zuka Sabata play a couple in the midst of breaking up, but life is what happens to you while you're busy making other plans (to quote a song that's not in the show.) While they're separating their belongings, they get trapped in what might also be called a cupboard, or a walk-in closet. In addition to playing these characters, Olsen and Sabata offer earthquake facts that are pretty scary in themselves.

The songs they perform are by various recording artists. They credit Bobby McFerrin for the arrangement of one, and their a cappella versions of the others seem also in the McFerrin mold. The songs alone are attraction enough. Most seem to express a character's dreams or fantasies, and the guy's nickname is apparently the excuse for a great rendition of Bob Schneider's "Hulk."

Though the basic situation of troubled couple trapped into realizing they still love each other is familiar, the story has some neat and surprising twists. The performances -- dramatic, comic and musical -- by Olsen and Sabata are flawless, charming and convincing. The only names on the program not theirs are a trio of light and sound board operators (Jennie Kaplan Woodson, Julian Oakes Norman, Zoe Troxell), and for good reason: The sound and light cues are important and also performed seamlessly. Though the show is under an hour long, that it was written and prepared in a few weeks is astonishing and heartening: There's a place for instant theatre.

I'd planned to write more about the story, but now that there are two more performances (Friday at 8 and Sunday at 2 at the Arcata Playhouse), why spoil it for people smart enough to go?