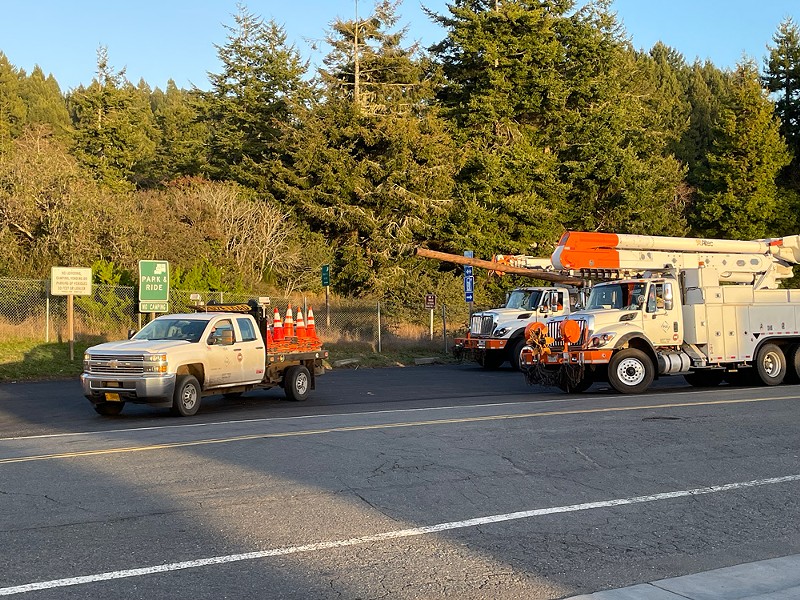 Photos by Thadeus Greenson Trinidad Town Hall was converted into a warming and device charging center in the wake of the storm fronts that left many residents without electricity.

Already shaken entering the New Year, Humboldt County is now also wind-blown and drenched and, in some cases, in the dark.

Humboldt County has seen little respite since a magnitude 6.4 earthquake jolted the region Dec. 20, knocking out power to most of the county and battering Eel River Valley communities. A New Year's Day aftershock caused widespread damage in Rio Dell, just before a series of storm fronts arrived, bringing gusty winds and a barrage of rain.

"I've lived here 50 years; I have seen many big storms in those 50 years but not one after another after another," said Supervisor Steve Madrone, whose Fifth District has borne the brunt of the storms, with downed trees leaving many of his constituents north of Trinidad through Orick without power, some for more than a week with estimated restorations still days out as the Journal went to press Jan. 10. "The way these cyclones have lined up is really something."

"People are tired," Madrone continued after a pause. "It's got everyone on edge."

With rain and wind dominating the forecast for the coming week, it seems the proverbial hits will keep coming. But here's a rundown of the various disaster responses and recovery efforts underway.

When the first major storm system hit Humboldt County a few days into the New Year, Trinidad — the small city perched on the coast, where wind gusts reached more than 70 mph — was quickly left in the dark, with powerlines to the north and south downed by falling trees and limbs. PG&E was able to get the lights back on after about 24 hours, but more gusts knocked it out again Jan. 6 for another two days.

City Manager Eli Naffah said many residents lost the contents of their refrigerators and freezers, and some reported minor damage from tree limbs coming down on their homes and decks. But mostly, he said, the city fared OK. But the same could not be said for its neighbors to the north living in unincorporated areas of Humboldt County.

As of Jan. 10, thousands of PG&E customers north of Trinidad were still without power almost a week after it was severed Jan. 4, and the utility was projecting the outage would continue another three days. Included in the outage are a number of trailer parks with residents on fixed incomes, including many seniors.

Madrone said Tri-County Independent Living has been incredible, stepping in to get folks dependent on electrical medical devices set up in hotels or other accommodations, while the Humboldt Area Foundation (HAF), Pay it Forward Humboldt, Humboldt Made and other local nonprofits have worked to keep people fed and warm, and meet other needs as they arise.

Naffah said HAF and Humboldt Made arranged for Los Giles Taco truck to set up near the Town Hall to distribute free burritos Jan. 9. Recognizing that while most of the city's residents had power again but their neighbors to the north did not, Naffah said city work crews printed up fliers and went door-to-door to distribute them in neighboring unincorporated areas, adding the city has also welcomed these folks into the warming and device charging center it set up in Town Hall. Some folks from Big Lagoon came down and picked up 40 burritos to feed their neighborhood, Naffah said.

Madrone said PG&E brought a number of generators into Orick to power the school, the fire hall, the water treatment plant and set up a charging station. While everyone wants their electric service restored as soon as possible, Madrone said the company was doing all it could.

"When you get hit from Big Sur to the Oregon border, you're going to get overwhelmed," he said.

Pay it Forward Humboldt Director Jessica Gregorio said the disaster response launched in Rio Dell a few weeks ago has now become countywide, noting that she's been scrambling to help communities from Big Lagoon — which aren't only without electricity but also any cell service or internet connections — down to the Mattole Valley, where downed trees also severed PG&E transmission lines. She said that in addition to the basic necessities of food and water, cleaning supplies have been in high demand, with residents needing to scrub their fridges of spoiled food.

"We're just working in collaboration with so many other organizations and groups in this county," Gregorio said, praising HAF, the California Office of Emergency Services and other groups.

She urged county residents who want to help to simply first check on their neighbors, "particularly those who are a bit more vulnerable," and then consider donating to one of the local nonprofits responding. (Pay it Forward Humboldt keeps a running list of donation requests and drop off information at tinyurl.com/Hum Quake.)

"It's because of donors that we are able to do any of this, and anything that comes in goes right back out," she said. "We don't have any paid staff. We're just paying it forward and, hopefully, the people we help today will soon be in the position to help someone else. That's the essence of it."

Madrone struck a similar note. While everyone has been talking about the "power going out," he said his partner recently corrected him, saying, "The power didn't go out. It's the electricity."

The true power, Madrone said, is the ability of neighbors to lift one another up, to share a generator or a meal, to help where they can.

"That's power, and that's in full swing," he said.

When the Humboldt County Board of Supervisors convened Jan. 10 to consider approving $1 million in earthquake relief funds, among other things, it was briefly forced to adjourn after a 3.4 earthquake rattled the courthouse.

It was a reminder, County Administrative Officer Elishia Hayes told the board, that "Mother Nature reigns supreme."

Hayes then offered the board an update on ongoing damage assessments following the Dec. 20 quake and string of aftershocks, noting more than 70 structures countywide have been red tagged and deemed unsafe for occupation, with another 114 yellow tagged, indicating they sustained significant damage. The bulk of those are in the small city of Rio Dell, Hayes also noted, which had approximately 170 residents displaced as of Jan. 2, or about 5 percent of the city's population.

As of Jan. 3, Hayes said the county has received 174 damage reports, with personal income loss totaling an estimated $103,595 and household financial losses of $1 million. Additionally, according to the staff report, 127 businesses have reported losses of more than $1.4 million. Hayes advised the board she believes total damage will near or surpass $10 million.

The board voted unanimously to use $1 million of $3.2 million the county received from the American Rescue Plan Act of 2021 to create a program to help with temporary sheltering of residents, home repairs and other types of assistance. These funds will come in addition to $3 million in disaster relief aid that North Coast state Sen. Mike McGuire said the state has pledged to help affected residents meet "basic needs," including damage repairs and rental assistance.

Earlier in the meeting, the board took a moment to pass a resolution praising the work of county building inspectors who mobilized after the Dec. 20 quake to head to Rio Dell to help with inspections. Rio Dell City Manager Kyle Knopp said Planning and Building Director John Ford made his crew available "without question or reservation," and they were on the ground in the city by 9 a.m. to begin door-to-door inspections. Second District Supervisor Michelle Bushnell emphasized the emotional toll these inspections took, noting inspectors red-tagged 25 houses that first day, telling residents they had to leave their homes without another place to send them.

Building Inspector Robert Edwards shared his story with the board of helping a woman who had been stuck in her home that morning. He said the woman has multiple sclerosis and her electric wheelchair had become stuck, with its battery dead. Edwards said he was able to push his way through the woman's jammed door and, thankfully, she was unhurt, just scared. He said he held her hand while he called the fire department, which was "there right away."

"She was pretty scared but ... it was a blessing for us to go door-to-door and help that lady," Edwards said. "It was physically and emotionally — it was a lot. But thank God we were there."