She Kills Monsters on a Quest at CPH 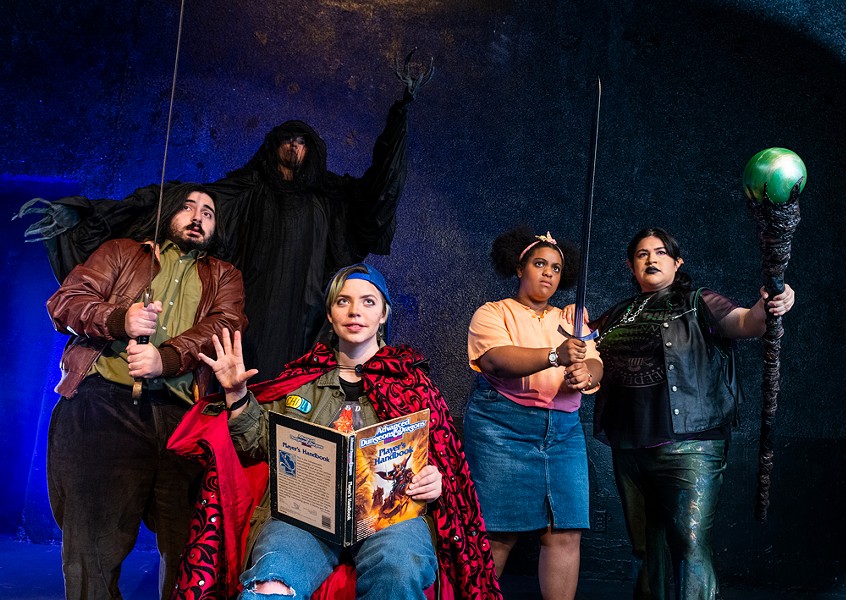 A brilliant theatrical script leaves room for designers to be bold in their decisions. And if you pair that with a raucous cast obviously enjoying themselves, an audience will share in the joy and overlook or even justify some imperfections. Qui Nguyen's She Kills Monsters is that script and it is a pleasure to witness Cal Poly Humboldt's players tell this story.

The narrator (Dar Benker Gilkey) musters up her best Galandriel voice to explain amidst some brilliant shadow puppetry that Agnes's (Miah Carter) parents and sister Tillie (Geneva Bell) were killed in a collision, but "This isn't the story of that tragedy." While packing Tillie's belongings with her boyfriend Miles (Stephan Chittenden), Agnes discovers a Dungeons and Dragons campaign she created before her death. In an attempt to learn more about her estranged sister, Agnes seeks the help of nerdy student/badass dungeon-master Chuck (Evan Pierce) to explore the game and why her sister loved it so much. Chuck offers to play it with Agnes who enters the "Quest for the Lost Souls of Athens" accompanied by Dark Elf Kaliope (Priscilla Cuellar), Demon Queen Lilith (Krystie Obiso) and Tillius the Paladin (Agnes's sister Tillie). Alternating between the game, reality and the fine lines where they intersect, Agnes learns more about her sister through her writing and imagination than she did when she was alive. Though the process is not at all as tragic as it sounds — it stays fun with sword fights, magic missiles, plenty of severed limbs, cheerleading demons (Oliver David and Mallory Merlo), a foul-mouthed faerie (Aly Greaver), and a five-headed dragon.

I appreciate director Sarah Peters Gonzalez's choices to keep the production simple. Some might see a script call for swords, missiles and a grand quest befitting the most hardcore of die tossers and want to strategically plan a San Diego Comic Con-esque manga-tude production. However, Gonzalez's simplicity adds to the comedy by taking the absurdity to sometimes ridiculous levels. It played on my nostalgia for creating '80s Renaissance fair/sci-fi costumes as a poor, brown, bullied kid, escaping into alternate default realities; I'm sure I wore the same green blob costume used in the show for Halloween. Sometimes the inconsistency of using real swords as props but not real leather or armor can easily be rectified by going with foam padded LARP weapons. Still, the choices feel intentional and not like an oversight. Cindy Shepard's costumes are equally well-thought out in her minimal interpretations of characters. Sometimes relying on a literal translation like a Tinkerbell-ish fairy and other times a looser interpretation like a shiny, thin Lycra to represent armor or a brocade to read as leather. Her costumes gave the feeling of something the characters made, which can be supported by the script. Conversely, Dionna Ndlovu's lighting design is not minimalistic but sublime in its beauty. This designer understands the harmony in mixing colors and designing for all the elements — people and things — appearing in their space, making bold decisions to make them seen. Bravo! Alongside a set designer that I scoured the playbill in vain to name finally makes use of the fly system. The pairing makes the show deeply aesthetically satisfying.

Carter's ability to play the straight man, anchoring the onslaught of zaniness while staying interesting and engaging, is necessary for the success of the show and she rises to the occasion. A beautiful moment with Obiso late in the show is particularly touching and poignant without being overly dramatic. Maverick Cheney's Steve steals the show as he ups the stakes with every entrance. Other scene stealers were Elena German as Vera, who is strong and grounded in their comical advice, and Jake Hyslop as Orcus the Overlord of the Underworld — an approachable, loving and funny red demon. The true success of the actors is their ability to stay on the same level in their attention and their willingness to be in the moment and play. It is the magic of a company where an actor is simultaneously supported and support for others. Their comradery shows in the piece and permeates the audience. Once the ensemble realizes the immensity of the Van Duzer's space and matches not only their voices but energy output accordingly, everyone will undoubtedly excel further.

She Kills Monsters is pure comedy with a heart of gold and accessible depth. It deserves to be seen.