A memoir by Margot Genger 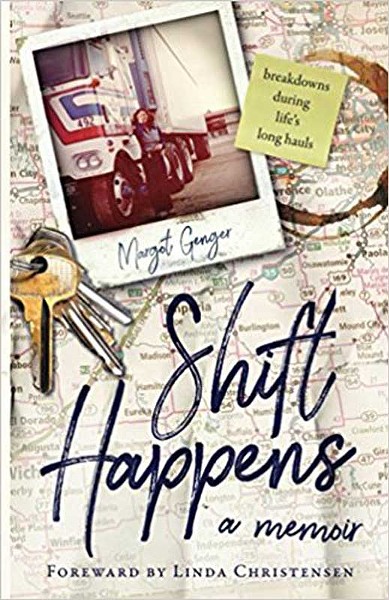 Overwhelmed by a failed marriage and a traumatic broken engagement, Margot Genger found temporary relief in alcohol and casual relationships. When she careened into a manic episode that led to a complete and very public psychotic breakdown, she recognized she needed to change her life trajectory. She came up with a rather unusual plan while sitting in Denny's and staring out at the traffic on U.S. Highway 101: She would learn to drive an 18-wheeler, get a job as a long haul trucker and write a best seller about it.

This plan had the added benefit of getting her out of town and away from the censure she felt from friends and family. Genger's memoir Shift Happens chronicles the following months as Genger graduated from the College of the Redwoods truck driving course, got her commercial license and embarked on her career driving for Sam Tanksley Trucking.

The night before she was to report for her new job, one final lapse in judgement resulted in a DUI. To prevent this going on her driving record and short circuiting her plan before it even began, Genger agreed to attend AA meetings.

Long haul trucking requires timely deliveries but a driver is only allowed so many continuous hours, so partners are assigned by the company. This was the 1970s and there were very few women in this job. Genger did partner with one woman but the other 10 were a motley assortment of men. Pretty much all of these situations were a nightmare of one kind or another, but she was determined to master the technical job skills required and to confront her own personal demons that led to the rapid turnover in drivers willing to share a cab with her.

During layovers and on her infrequent visits home, she found herself looking for the nearest AA meeting instead of heading to a bar. Although she didn't consider herself an alcoholic, she found the meetings helped her recognize self-destructive behaviors and eventually open herself up to the genuine kindness and support of her family, friends and the occasional stranger.

While this book confirms my suspicion that I would never want to be behind the wheel of a semi truck, it was a pleasure to ride along on these journeys; one crisscrossing the U.S. and the other inside the heart and mind of this remarkable woman.

JoAnn Bauer was the children's librarian at the Humboldt County Library for many years. Retired, she continues to support the HCL on the Humboldt Library Foundation Board. She is active in three book clubs and shares book recommendations with anyone who will listen!