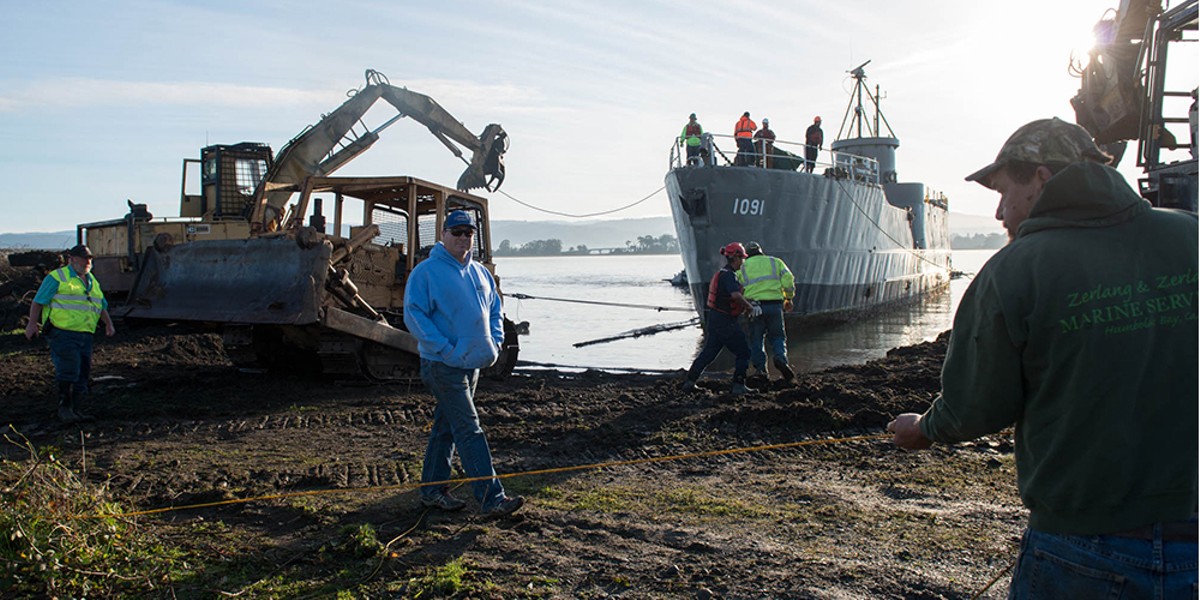 Photo by Mark McKenna The USS LCI 1091 was moved by tug boat from its mooring at the foot of Commercial Street in Eureka to a piece of land near Redwood Terminal 1 behind the Samoa Cookhouse.

Photo by Mark McKenna Before moving the LCI 1091 and pulling it from the water, officials pumped more than 10,000 gallons of oily, contaminated water from its hull.

Photo by Mark McKenna The LCI 1091 is moved by tugboat from its mooring at the foot of Commercial Street in Eureka to a stretch of land near Redwood Terminal 1, behind the Samoa Cookhouse.

Crews prepared for the final pull to get the LCI 1091 on land.

On a recent Monday morning, a crew stood on the banks of Humboldt Bay and watched with bated breath as a rickety, 200-ton bundle of history and environmental risk was pulled from the water.

"It was sinking," Humboldt Bay Harbor, Recreation and Conservation District CEO Jack Crider said of the LCI 1091, which had spent decades moored at the Englund Marine fueling dock in Eureka. "Once those boats fail, they fail pretty quickly."

The 1091 is a familiar name to those who draw their livelihoods from Humboldt Bay. It came up in multiple conversations with the Journal back in March when, in the wake of the sinking of the Dennis Gayle, we looked at efforts to keep the bay's dilapidated ships from going under and spilling their fuel and oil into the water on their descent to the bay floor. Many, it seemed, were worried about the old Navy vessel.

But the story of the effort to get the 1091 off the water begins in earnest a few months back when Crider stepped aboard. "They had an area taped off below deck and I asked if I could go down there," Crider recalled. When he went below, he said he saw water seeping through sealed hatches and a jerry-rigged system used to pump water into various fuel tanks and compartments in the ship's hull. The site, Crider said, filled him with a sense of urgency.

Of course, the 1091's story begins some seven decades earlier to its launch in September of 1944, when the shallow draft boat was designed to run right up on a beach and unload 200 infantryman in less than three minutes. The vessel earned six battle stars — two in the Pacific during World War II and four more combatting malaria during the Korean War — in a little more than a decade of service before it was decommissioned and joined a fishing fleet on the Yukon River.

It arrived in Humboldt Bay in the late 1990s, when McKinleyville dentist Ralph Davis purchased it and outfitted it to fish for albacore. When rising fuel prices rendered its use unsustainable, Davis gifted the ship to the Humboldt Bay Naval Sea/Air Museum, a small nonprofit with a group of dedicated volunteers who hoped to restore it to its World War II station.

The trouble is the nonprofit has never had the funds to do much with the aging ship, despite its best efforts and twice-weekly work breakfasts onboard. In fact, according to Eureka Parks and Recreation Director Miles Slattery, the nonprofit couldn't even keep up with mooring fees owed the city, falling behind more than $15,000. Slattery said that was the city's primary concern, up until a recent phone call from Crider alerted him to the real possibility that the ship could sink, leaving the city facing the costs of raising the boat and cleaning up any oil and fuel spills.

"We recognized it was a serious emergency and we could have been in the hole for a hell of a lot more money," Slattery said.

Slattery immediately began working with the nonprofit to figure out an agreement to get the ship out of the water, and the Harbor District applied for an emergency permit from the California Coastal Commission that would allow it to haul the boat out of the water near the Samoa Cookhouse and spend 90 days assessing the work needed to get it seaworthy again.

The nonprofit, representatives of which did not return Journal calls seeking comment for this story, ultimately agreed to a hold-harmless clause that would absolve the district and the city of any liability if the ship were damaged in exchange for the city forgiving its mooring debt.

The weekend of Dec. 10, a joint crew from the harbor district and the city worked 14-hour days to get the ship ready to be pulled ashore. In the final tally, it pumped more than 10,000 gallons of contaminated, oily water out of the ship, as well as some other fuels and chemicals. When the crew finished, Slattery said, the ship "literally raised up about 6 feet" in the water. It was then pulled by a Zerlang and Zerlang tug over to the peninsula, where a crew from Figas Construction pulled it from the water and onto a series of telephone poles. The operation went off without a hitch, Slattery said, thanks to the careful work of everyone involved.

So what now? Well, the nonprofit has 90 days to assess the boat and its needs. From there, it could be moved to a dry dock to be fixed up, if the nonprofit museum can foot the bill. If not, it could be sold for scrap. Slattery said the city spent probably more than $10,000 on the effort, money he doesn't expect to recoup. "You're bleeding a turnip," he said, adding that he thinks the nonprofit simply doesn't have the money.

Slattery said some involved with the nonprofit were critical of the effort, charging it was just because the city wanted to free up the Englund Marine fueling dock, which Crider has long thought could be a valuable asset to lure research vessels into the bay. "There was a guy out there yelling, 'Why are you doing this?'" Slattery recalled. "I was like, 'Dude, because you have a hazard here.' It's all about the bay. It's not about us against them."

Slattery and Crider both said they are hopeful the nonprofit can salvage the ship, either readying it to return to the water or transitioning it into an onshore museum. But both were clear it had to come out of the water.

"I feel bad for the group," Crider said. "Trying to take care of a vessel of that size and of that age isn't easy or cheap, so they were doing the best they could with the small amount of resources they had. But something had to be done."