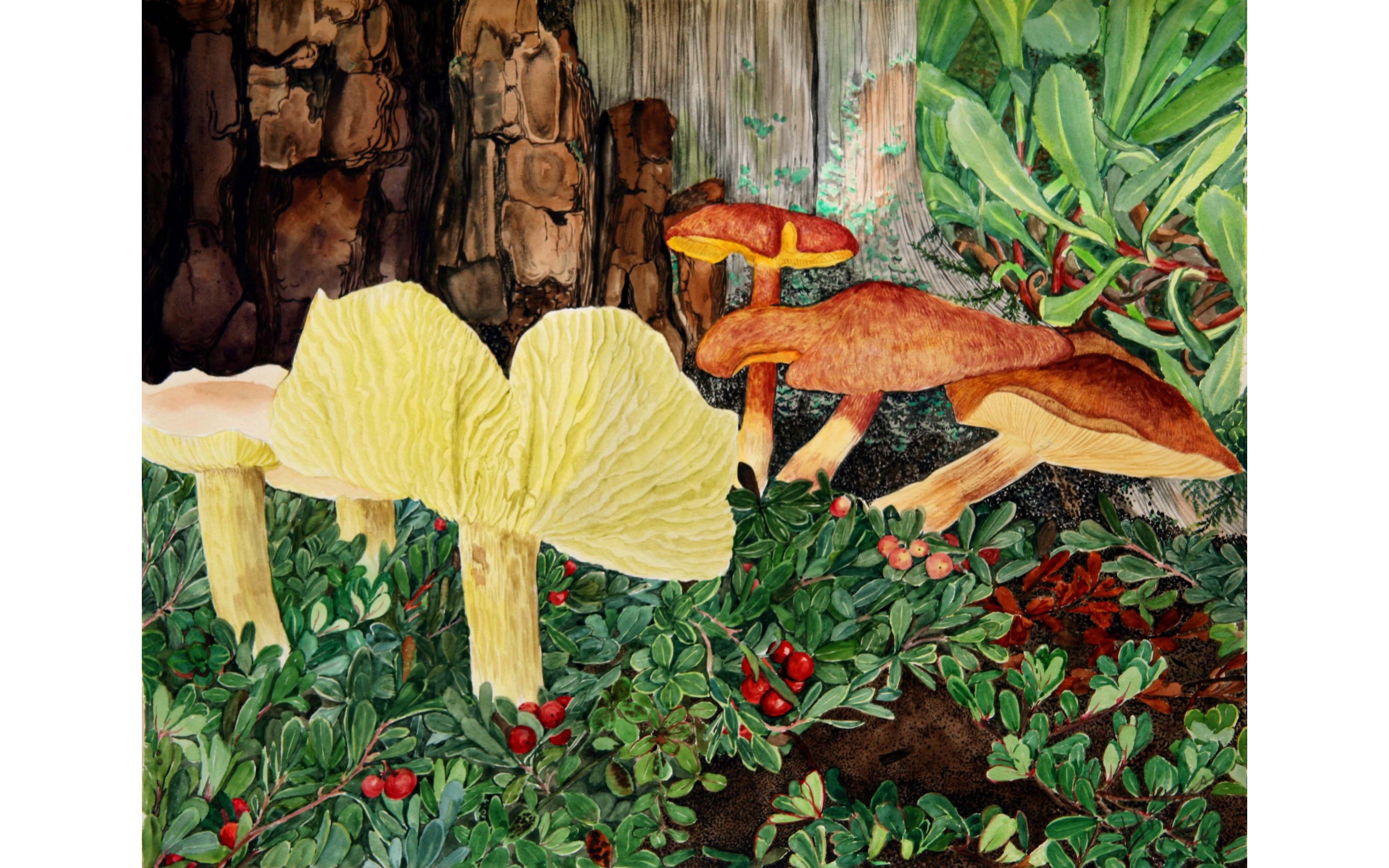 One fall day in the ’70s, not long after Joann Olson moved to Humboldt to study biology at HSU, she took a walk in the woods. "I saw these incredible purple mushrooms. I'd never in my life seen anything like them. I was just hooked, wondering, 'What are these things?' There were mushrooms everywhere in such a variety of shapes and colors and sizes.

"I had not seen many mushrooms -- in Southern California where I'm from they don't have mushrooms like they have here. I was fascinated. As I began learning about the ecology of fungi and their role in natural history I wanted to learn more. Mycology became my hobby and it has been for about 35 years now."

Olson ended up becoming one of the founding members of the Humboldt Bay Mycological Society. She is currently the president and is in charge of their 31st annual Mushroom Fair this Sunday at Redwood Acres.

"We'll have our usual fantastic display of between 200 and 300 species of mushrooms collected throughout Humboldt County," said an enthusiastic Olson.

Will it be easy finding that many? Is it a good year for mushrooms? "It's looking like it might be," she opined. "It usually takes about 4-6 inches of rain to really hydrate the mycelium, the under-the-ground parts of the fungus. Rain gives it energy to send up fruiting bodies, which are the mushrooms themselves. We had that rain pretty early this year, but most of it came in one big storm. One theory is perhaps because it all came at once, it didn't really soak in as it would if it was spread over a couple of weeks, so we were expecting the mushrooms to be early. In fact they're coming along at about the usual time. They're just starting to fruit prolifically right now."

With a couple of dozen ace mushroom hunters from the Society searching in the next few days, you'll see just about every local mushroom possible at the fair along with displays on how they fit into nature and how they're used.

"We have a display table with edible fungi, and right next to it is a table with toxic fungi. We have experts on both: Dr. Bruce Kessler is our expert on toxic fungi -- he'll be explaining them -- and we have several members who know the edible fungi. We also have a guy who comes up from the Bay Area who sells mushroom cultivation kits, which are very popular. The big thing this year is an art exhibit of the beautiful mushroom watercolors painted by Hortense Lanphere in the 1940s through ’70s."

Hortense and her husband, William Lanphere, owned property along the coast near Arcata that they donated to the Nature Conservancy to become part the Humboldt Bay National Wildlife Refuge Complex. "She was very interested in mushrooms and was an amateur mycologist," said Olson. "Her paintings show the mushrooms in their natural habitat, so for example, mushrooms from the dunes are in with prostate manzanita, reindeer lichen and bearberry. They're just beautifully done, a real treasure. I believe this will be the first time the whole collection has been exhibited in Humboldt County."

While Olson did not pursue mycology professionally (she's a clinical microbiologist) she's still quite serious about mushrooms. "I'm doing research on an obscure but extremely numerous group of fungi from the genus Cortinarius," she said. "I'm working with Dr. [David] Largent on his research on the mushroom flora of Redwood National Park, specifically looking at the Cortinarius."

Can you guess what genus the purple mushroom that inspired her three decades ago comes from? That's right: Cortinarius.