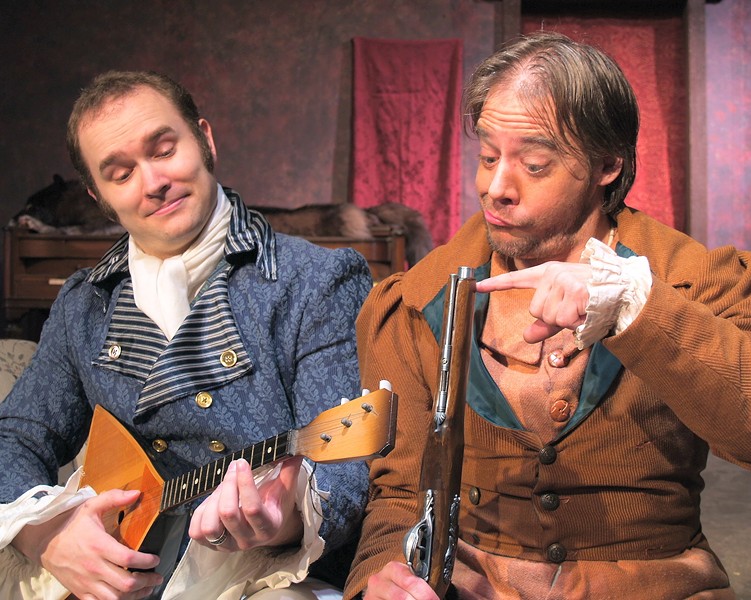 The Government Inspector, Nikolai Gogol's mid-19th century surreal satire, has been called the greatest play in the Russian language by no less than mid-20th century prose stylist Vladimir Nabokov. Over the decades it's been translated and adapted many times in many countries, but it seems particularly popular right now. A version that's just opening in London is the second new adaptation in the UK in just the past few years. In 2008 American playwright Jeffrey Hatcher adapted it for the Guthrie Theatre in Minneapolis and Milwaukee Rep. Perhaps reflecting current attitudes toward government, the style of all these recent versions tilts decidedly toward farce.

Even before the current North Coast Repertory Theatre staging of the Hatcher version, there have been other productions here this year, sort of. Just last month, Northcoast Preparatory Academy used the Gogol play as the framework for their pastiche, Russian Promenade, at the Bayside Grange. Dan Sullivan's play Inspecting Carol borrows from the framing story of The Government Inspector, as presented last December at the Arcata Playhouse by the Rialto Theater Company in a production that included no fewer than six participants in this North Coast Rep show, including four cast members.

The play's premise is simple: The Postmaster of a Russian village, who reads everyone's mail in advance (which is why the mail is often late -- he falls behind in his reading) tells the Mayor that a government inspector from the capital is secretly visiting towns in this region. But the news is months old, so the stranger from the city who has been staying at the inn is quickly identified as the government inspector.

Of course he isn't -- he's a minor bureaucrat with delusions of grandeur and a gambling problem. But the Mayor and other officials ply him with bribes, while the Mayor's wife simultaneously offers him her daughter and herself.

Mistaken identity is only the beginning. There is ample opportunity for slapstick, pratfalls and other shtick, and in this production no such opportunity goes begging. The resulting mayhem is like a collision of classical Greek and Roman satire, French bedroom farce, absurdist commedia and American vaudeville. Meanwhile, Hatcher supplies verbal wit, both gross and subtle, with echoes of Jonathan Swift and anticipations of Stephen Colbert. But even though it's no Duck Soup, the Marx Brothers as reigning spirits are made explicit in the faux inspector's improvised love song to the Mayor's daughter -- with nearly identical lyrics and the same melody as Groucho's second-most-famous tune, "Lydia, The Tattooed Lady."

As North Coast Rep actors, director Adina Lawson and assistant director Evan Needham are acquainted with what's possible on this particular stage, so the orchestration of the action is flawless. Calder Johnson provides a handsome open set as well as lighting, Lauren Wieland and Rae Robison the costumes, Brittany Gonzales and Michael Thomas the sound. Together they present a funny and theatrical evening. I did feel that the production emphasized the phony inspector's story: how a rogue improvises advantages from the mistaken identity. But it's the Mayor's story that's the soul of the play, and through it the complexities of small-town pretension, corruption and selfish ambition are satirically exposed and elaborated.

North Coast Rep in Eureka presents The Government Inspector on Fridays and Saturdays at 8 p.m. through June 25, with Sunday matinees on June 12 and 19 at 2 p.m., and a Thursday evening show on June 23. Info: 442-NCRT; ncrt.net.

The Sugar Bean Sisters plays Fridays and Saturdays at 8 p.m., and Sundays at 2 p.m. until June 26. Friday, June 17, is Ferndale Rep's Date Night: All couples receive a complimentary glass of Sugar Bean "Sugar Brew." Info and reservations: 1-800-838-3006 or visit www.ferndale-rep.org.