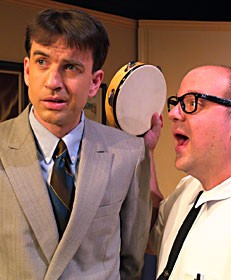 If you’re interested in a summer night out, perhaps contributing to a worthy cause while seeing some friends and having some laughs, the North Coast Repertory Theatre production of The Nerd will probably satisfy. If your demands and desires are greater, maybe not so much.

This comedy is set in Terre Haute, Ind., in the early 1980s, where Willum, a young architect (played with steady likeability by Douglas Anderson), is trying to succeed in business without losing the soul of his creativity. He’s at an impasse in his relationship with his girlfriend, Tansy (newcomer Queena DeLany, also steady and likeable), who is about to make a career move to Washington, D.C. Observing this is their witty friend, Axel, a theatre critic (played with genial sarcasm by David Moore).

Enter Rick Steadman, the man who saved Willum’s life in Vietnam (though they’ve never met). Played by Dmitry Tokarsky with braying gusto, he is the title character and the fly in the ointment of normality. He disrupts a dinner party that includes Andrew Jordan as the gruff developer Willum is currently trying to please, Shelley Stewart as his sweetly repressed wife and Alex Sutter as their hyperactive son. And the story goes on from there, to a “surprise” or two for the heartwarming ending.

If this sounds like the premise of a sitcom episode, there is that feeling about the entire play. It could probably use a few long commercial breaks to dull the brain into not noticing the porous plot. It has a lot of jokes and sight gags — the NCRT audience I saw it with laughed at many of them, I laughed at some they didn’t and nobody laughed at others.

But as the play goes on, its flaws become disheartening, not helped by aspects of the production, at least that night: some poor enunciation and lackluster timing, forced pace and flagging energy. The well-handled mayhem of the first act dinner party wasn’t quite matched by inventiveness and verve in the second act. And the twists at the end don’t hold up past the first blush.

The problems begin with the premise. Larry Shue, an actor who grew up in Eureka (well, the one in Kansas), wrote two comic plays in the early 1980s that are performed to an extent that is almost viral, especially by community and college theatres, and mostly in the summer. The second one, The Foreigner (which NCRT produced in 2005) is the better play, as I recall it (although I first saw it at a college summer theater production that was memorable mostly for the lead actor’s dead-on imitation of Pierce Brosnan, then the star of TV’s Remington Steele ). This one, written in 1981, prospered partly because the premise — the idea of the “nerd”— was becoming fashionable.

Although the concept of the clueless outcast — the doofus, the dork, etc. — is as old as time, or at least high school, the Nerd became the latest flavor in the 1980s, as reflected in the Revenge of the Nerds series of movies. One dictionary defines a nerd as “unstylish, unattractive, or socially inept person: especially, one slavishly devoted to intellectual or academic pursuits.”

It was a quality of the Reagan years — that mean-spirited putdown of intelligence in favor of the beer-swilling idiot as ideal American male, which not really coincidentally defined a marketing niche for beer and other products by attaching them to this purposefully limiting male cliché.

In the ’80s, when the personal computer revolution was just beginning, the term was particularly applied to computer enthusiasts. There are two problems with this: First, it doesn’t apply to “the nerd” in the play, who inspects chalk for a living and can’t run a primitive answering machine. Second, in 2007 it’s obsolete. Though these days some of these qualities adhere to what’s called “a geek,” the nerd stereotype has been diluted and defeated by time. The last movie with “nerd” in the title was Triumph of the Nerd in 1996 — a documentary featuring Bill Gates, Paul Allen and Steve Jobs. Who wouldn’t want them at their dinner party?

The Ferndale Repertory Theatre production of a Rodgers and Hammerstein’s musical, The Sound of Music , begins next week and runs throughout the month of August. Co-directed by Vikki Young and Marilyn McCormick, the large cast (replete with young and younger) is headed by Jenaha Hochhalter, Bill Cose, Ariel Graham, John McKinney and Geri Cose. Preview night is Thursday, Aug. 2, and the opening night event is Friday, Aug. 3, at 8 p.m.

The story is based on the exploits of the Trapp family, who climbed every mountain carrying their favorite things as they escaped the Nazi invasion of Austria, while bringing the hills alive with the sound of music. The Rep notes that it is “one of the best loved musicals of all time,” and if you’re one of those who love it, this is your chance to see and hear it live.

The Humboldt Light Opera Company opens its summer production, the Tony Award-winning TITANIC: A New Musical on Aug. 3 at the Van Duzer Theatre on the HSU campus. It’s based on actual events and testimonials of survivors rather than the characters James Cameron invented for his famous movie. The production features a full orchestra and a tilting stage. It plays Fridays and Saturdays at 7:30 p.m. the first three weekends of August, with 2 p.m. matinees on Aug. 12 and 18.

Check the calendar for more details. For more news and views, tune into stagematters.blogspot.com.