NOAA An example of a Deep-ocean Assessment and Report of Tsunamis (DART) buoy. 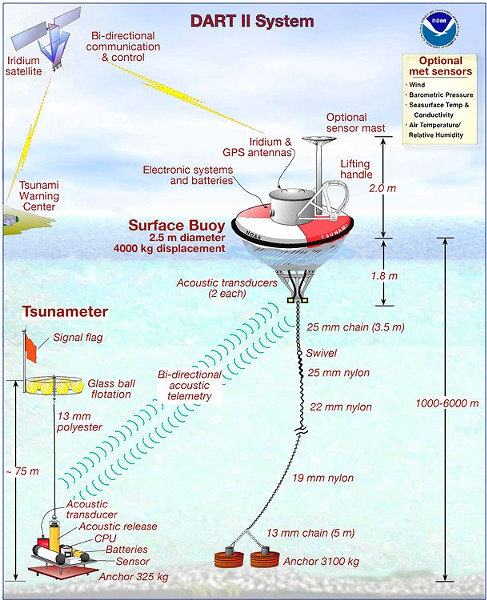 NOAA A diagram of how a DART buoy works.

When an earthquake that struck a string of remote islands off Russia was revised up to a magnitude-7.7 on July 17, the National Tsunami Warning Center issued a tsunami advisory for parts of Alaska.

Several updates were sent out over the next hour from the remote monitoring post in Palmer, Alaska, until readings came in from a network of sensor-laden buoys strung across the Pacific Ocean that allowed the all-clear to be sounded.

No one was in danger from a tsunami in that particular case, but the warning system that has undoubtedly saved lives and prevented millions of dollars in property damage in the past has been sitting in a hazard zone of its own in recent months.

President Donald Trump has proposed shuttering one of the nation's two warning centers, cutting the staff that stands watch 24 hours a day by 40 percent, and ending funding for the deep-sea monitoring system that provides real-time information on a tsunami's movements.

The savings from those cuts amount to a proverbial drop in the bucket of his overall $4.1 trillion spending plan, which the administration notes comes with "tough choices."

For example, about $12 million is needed for the network of floats attached to sensors set on the ocean floor that send warning center staff immediate data, allowing them to more accurately predict when and where a tsunami will hit — as well as if the coast is clear.

Just as important, the expanded data system also helps prevent unnecessary evacuations — something that happened in Hawaii in 1994 — that can not only result in a devastating economic toll but also erode confidence in the system.

"They are what can really make the difference as far as turning that switch off or on," says Humboldt State geology professor Lori Dengler, who has dedicated her professional career to educating coastal communities about earthquake and tsunami dangers.

Closer to home, the warning system was on full display in March of 2011, when the sounds of tsunami sirens blared along the North Coast and residents were evacuated from low-lying areas in advance of surges sent to our shores by a magnitude-9.1 earthquake that wrought havoc in Japan.

It was the sensors on those buoys, Dengler says, that gave emergency services officials confidence in predicting an impending tsunami, leading them to ask the Crescent City fleet to empty the harbor, which was soon destroyed by the surge.

"As a result, they were able to continue their livelihood," Dengler says, adding that "just from the savings in 2011, it paid for itself in terms of prevention of loss of life and allowing people to save their boats."

Last week, the House Appropriations Committee rejected Trump's proposal to gut the warning system that guards the West Coast from destructive waves generated by quakes from thousands of miles away. According to the committee's report, the Commerce, Justice, Science and Related Agencies Appropriation's Bill passed on July 13 includes a recommended allotment of nearly $973 million for National Weather Service operations and programs.

That includes funding for the two tsunami warning centers and the buoys, along with $6 million in community grants for education and outreach.

"It's irresponsible to the point of recklessness to propose cutting a program like this," he says, noting there is a bipartisian coalition in support of the system. "I'm glad, on the House side at least, we seem to be holding the line."

The committee's recommended funding level is $37 million more than the administration's suggestion, with the committee citing the need to "maintain critical capabilities to provide weather forecasts and warnings."

"The Committee does not adopt the proposed reduction of the Tsunami Warning Program," the report states.

Dorie Lanni, who oversees the Humboldt County Office of Emergency Services, say Trump's proposed cuts to the tsunami program would come with risks that just don't pencil out.

"A major earthquake in Alaska could generate a tsunami that could reach Humboldt County in just a few hours, leaving little time to evacuate the entire north coast," Lanni writes. "Closing the warning center responsible for issuing critical, time-sensitive warnings to millions of coastal residents and visitors will not be worth the cost savings during our next catastrophic distant source tsunami event."

But the threat of funding cuts has not been completely lifted quite yet.

The Senate has its own appropriation committee to set program level allocations and both chambers of Congress need to pass the spending blueprints before sending them back to the president for his signature.

"Every non-defense discretionary item, which this is, is at risk," Huffman says, adding House Republicans are looking to put as much money into defense spending as possible.

Dengler says she doesn't see the Senate putting the cuts back in. Tsunamis, after all, know no party and tsunami warning programs have long enjoyed bipartisan support, she noted.

The decision by the House Appropriations Committee to back off the cuts, she says, was really an example of the power of constituents making their voices heard.

Sometimes, Dengler notes, the tendency can be to resort to the view that if a federal program is important enough to certain states — in this case those vulnerable to tsunamis — then those states can pay for it.

"You very much need to have not only a national, but an international approach to tsunamis, so we're all on the same page," Dengler says for an effective public safety system to work.

While much of the media attention in recent weeks has been focused on the buoy network and cuts to the warning centers, Dengler notes another vital piece of the puzzle was also on the chopping block.

That came in the form of $6 million in grants — also saved by the appropriations committee — that help coastal communities pay for emergency drills and tsunami mapping, as well as education and outreach.

"There's no point in buying the system if you don't have a user's manual," she says.

With the last local tsunami of note hitting back in 2011, Dengler says memories can be short and those programs are paramount in keeping a community well prepared.

The fact of the matter is, she says, long distance tsunamis are not the region's biggest threats.

The main danger lurking off our coastline is a ticking time bomb known as the Cascadia Subduction Zone, a 1,000-mile megathrust fault which is capable of producing not just a monumental quake but a tsunami that could hit the coast in minutes.

While it's important that people have confidence in the warning system, it's also important that they know how to evacuate themselves from tsunami hazard zones in the case of strong, sustained shaking.

The educational message is not meant to be frightening but empowering.

"We have this situation, and we can do something about it, and what you know can make you and your family safe," Dengler says.

The goal, she notes, is that "everybody lives."