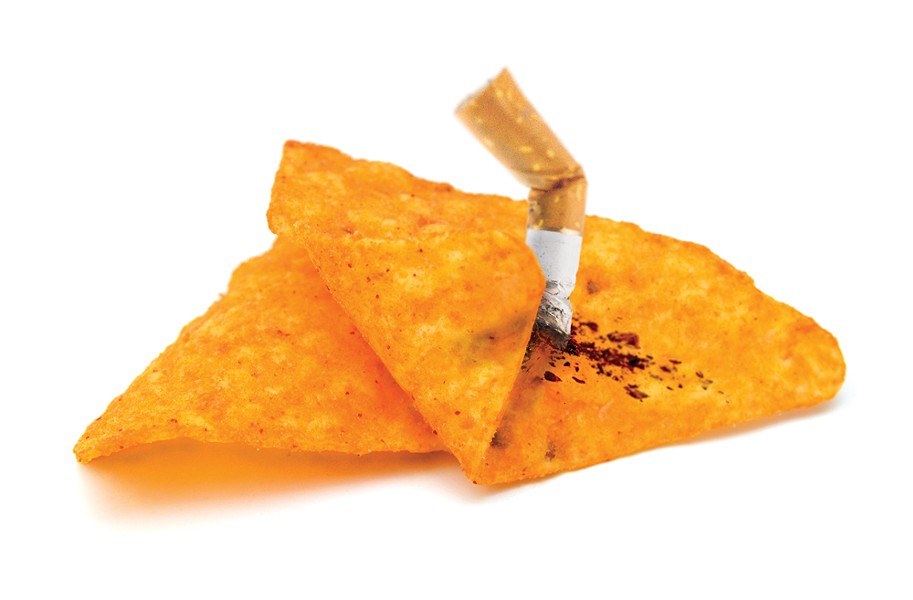 When I decided to give up smoking in my 20s, I resolved to enjoy my last cigarette the night before my birthday and turned my final smoke into a sacrament. I put The Moody Blues' "Nights in White Satin" on my tinny record player, turned off the lights and sat in the dark, gazing at the slim cylindrical tip of my Marlboro until its last glowing ash faded. The ceremony was a fitting end to an era, since much of the attraction of smoking for me was not the taste but rather the ritual and romance — admiring how sensuous and erotic a cigarette looked laced between my fingers and watching the smoke circles drift dreamily into the air.

Since then, I have found ceremony and ritual to be a powerful tool for overcoming an unwanted habit. The year I turned 30, I confronted my addiction to Doritos, having subsisted on them for years. I pinned a cascade of empty Dorito bags to my skirt and top, and went to a masquerade party dressed as Doritos. This time, my ritual was more playful and lighthearted, and that helped, too.

Here are five other tricks I've discovered for changing habits.

When a friend in North Carolina is tempted to smoke cigarettes, she finds a small glass jar with a good secure top and fills it halfway up with five or six used cigarette butts. After a few days, the jar has a strong, pungent smell. Whenever she has the urge to smoke, she opens the jar and smells it a few times until she gets nauseated and almost gags. Sometimes the memory of the smell alone will make her want to gag. If she's nowhere near a jar, she can bend down and smell an ashtray — not as powerful but still helpful.

From time to time this same friend and I report in to each other at the end of the day, by email or text, she about her cigarette intake and me about sugar, wine or any of my other compulsions. She might say "1/2 cig," and I might say, "two glasses of wine." Each of us is simply a receptacle for the facts; we don't even respond to the messages. But it helps keep us accountable.

When I used to drive from Eureka to Arcata for a class, I'd often stop at Murphy's in Sunnybrae to buy an irresistible bag of chips that I couldn't find easily in Eureka. I'd sit in the car after my class devouring the whole bag while reading a magazine. Bliss! But afterward, I'd feel bloated and almost sick. Finally, I asked a friend if I could call her before and after the drive and leave a message letting her know what happened. I made no promises other than an update. Communicating with her on either end of the drive made all the difference and after calling her a couple of times, I stopped buying the chips.

Milton Erickson, a hypnotherapist who died in 1980, would copy a patient to encourage change. For instance, he worked with a 12-year-old girl in a psychiatric ward who had destructive tendencies, such as kicking other patients in the shins or stamping on their feet. One day when she was tearing plaster off walls, instead of telling her to stop, he joined her, gleefully throwing furniture around and smashing windows. "This is fun!" he said. When they saw a nurse (who was secretly colluding with Erickson), he ripped her clothes off, down to her underwear. That was too much for the girl. Shocked, she grabbed a sheet to cover up the nurse. Once she saw her own actions modeled by someone else, she stopped her aggressive behavior.

I can be the fastest eater I know but, thanks to the mirroring technique, I've learned to moderate my pace. However, instead of seeing someone speed eat, I watch the person I'm eating with and take bites at their pace, which is always slower than mine. This helps me not only eat more mindfully, but digest better.

I wish I had known this strategy earlier in my life, when I often felt very defeatist after repeatedly failing to eliminate a habit. This technique, borrowed from Solution-Focused Therapy, assumes the behavior change you want to make is already within your repertoire and there was a time in your life when you weren't hostage to the habit. Rather than beating yourself up for the way you are now, you remember what you once accomplished, as a way of reminding yourself that your present behavior isn't all of you. You ask yourself questions like: When was I successful at this in the past? What was I doing differently? What kept me from unraveling? Why isn't the current problem worse than it is?

Promising myself I'll make changes, as in New Year's resolutions, rarely works for me. But getting help from friends, using rituals and affirming the positive seeds within have helped me find the strength and creativity to overcome several unhealthy habits.