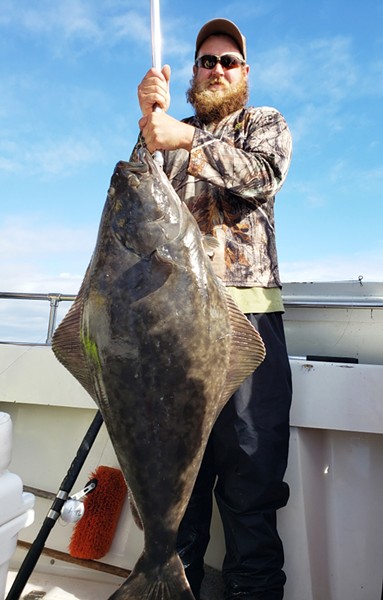 The weather isn't the only thing heating up right now. The Pacific halibut bite on the North Coast is sizzling! With salmon season still a couple weeks away, offshore anglers have honed in on the halibut, and they are coming over the rails at a record pace. Eureka and Trinidad have both experienced some exceptional fishing. And we're not talking about a couple halibut per boat, we're talking full limits by early morning. It's some of the best fishing we've seen," said Tim Klassen of Reel Steel Sport Fishing. "I think the water clarity has a lot to do with it. Last week the water was really dirty, and the bite slowed. There's seems to be fish from north of the entrance all the way to Trinidad in 260 to 300 feet of water. We're starting to see some bigger fish too. They're running anywhere from 15 to 45 pounds, but we're seeing more in the 30-to-40-pound class," added Klassen. The only thing that could cool the bite would be the wind. And that's exactly what's headed our way, and plenty of it.

Northerly winds will ramp up starting Wednesday and will persist through the rest of the work week and through the weekend. Friday's forecast is calling for 10 to 20 knot winds out of the north and waves north 11 feet at 10 seconds. Saturday looks similar, with north winds 10 to 20 knots and waves north 10 feet at 10 seconds. On Sunday, winds will be out of the north 5 to 15 knots with north waves 9 feet at nine seconds. These conditions can and will change by the weekend. For an up-to-date weather forecast, visit www.weather.gov/eureka/ or www.windy.com. To monitor the latest Humboldt bar conditions, visit www.wrh.noaa.gov/eka/swan. You can also call the National Weather Service at 443-7062 or the office on Woodley Island at 443-6484.

The CDFW has projected 2,825 net pounds of Pacific halibut has been harvested through June 6. In 2021, the Pacific halibut allocation for California is 39,260 pounds. The Pacific halibut fishery opened on May 1 and will run through November 15, or until the quota is reached, whichever is earlier. To view the latest catch projection information, visit www.wildlife.ca.gov/Conservation/Marine/Pacific-Halibut#31670772-in-season-tracking

Not only are the Pacific halibut snapping, the rockfish bite at Cape Mendocino is also going strong. A few boats have made their way south this week and reported easy limits of both rockfish and lingcod. The California halibut bite is starting to turn on as well. Quite a few were caught by the boats working the middle and third channels over the weekend. Shore anglers are also picking up a few at Fairhaven Beach tossing swimbaits.

The Pacific halibut bite slowed slightly over the weekend, but picked right back up on Tuesday. Curt Wilson of Wind Rose Charters, who boated limits on Tuesday, reports the best bite is south of Trinidad Head in 250 to 300 feet of water. "The rockfish action between the Head and Patrick's Point is still really good too," said Wilson. "We're catching mostly blacks, with limits coming pretty easily. We're also catching a few lings, but not a wide variety of rockfish right now." Crabbing is still good and the charter captains are sending their clients home with limits of fresh Dungeness.

Jake Mitchell of Sea Hawk Sport Fishing took advantage of some nicer weather and made the trip north for Pacific halibut and rockfish combos. "The halibut bite was scratchy at best and we averaged only one per day," said Mitchell. "The rockfish and lingcod bite on the other hand was fantastic and we had quality and quick limits each day.  We spent a couple days last week fishing rockfish close to home around the Hat and had pretty good results as well. We've been seeing a lot of salmon around last few days." Ocean recreational salmon season opens June 29 and continues through October 31.

Just about any direction you take, the rockfish and lingcod action are outstanding reports Britt Carson of Crescent City's Englund Marine. "The weather was a little better this week, so the boats were able to spend a little more time on the water," said Carson. "Just about everyone were reporting limits of both rockfish and lingcod. The redtail perch bite really took off this week; anglers were scoring easy limits along Kellogg Beach. The minus tides brought out the clammers, and there were plenty of clams to be had. Lots of limits reported for medium-sized razors. The next set of minus tides begin June 21. A couple Pacific halibut were caught last week, so hopefully that fishery is starting to heat up. Still no California halibut to speak of, and the effort remains low."

According to Andy Martin of Brookings Fishing Charters, the salmon fishing has been wide open out of Brookings, where anglers can keep hatchery coho. "Kings can be kept beginning Saturday," said Martin. "Charter boats caught limits over the weekend and early this week trolling whole anchovies behind Fish Flash flashers. Wild coho and kings outnumbered the hatchery silvers, but with so many salmon off of Brookings right now, limits are still fairly easy. The coho are 15 to 25 feet below the surface in 200 feet of water. Lots of kings are being caught deeper. Halibut fishing was good last week, but poor over the weekend and on Monday. Rockfish are biting everywhere, while the best lingcod fishing is at Point St. George Reef."

The decent bite in the Rogue Bay could return this weekend as an expected inland heat wave warms the water again reports Martin. "Fishing was good a week ago as temperatures hit 70 degrees near Agness a week ago. A handful of boats caught a fish per rod before water temperatures dropped back to 60 and the late-arriving springers blasted upstream," Martin added.