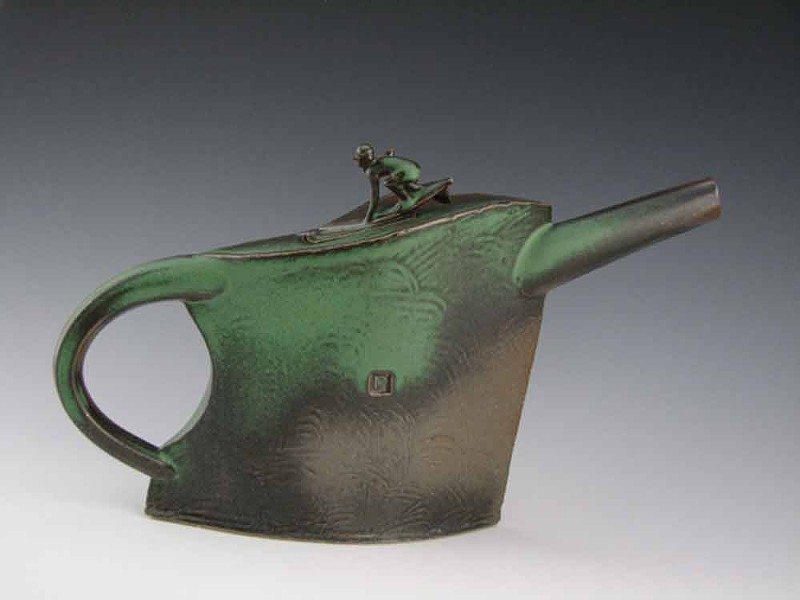 Photo by Michael Pearce. A surfer catches a wave on one of Pearce's pots. 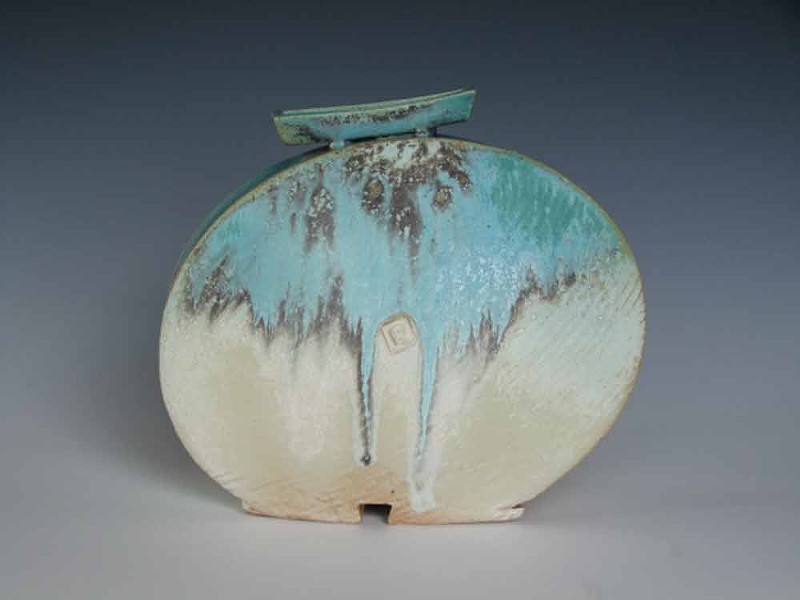 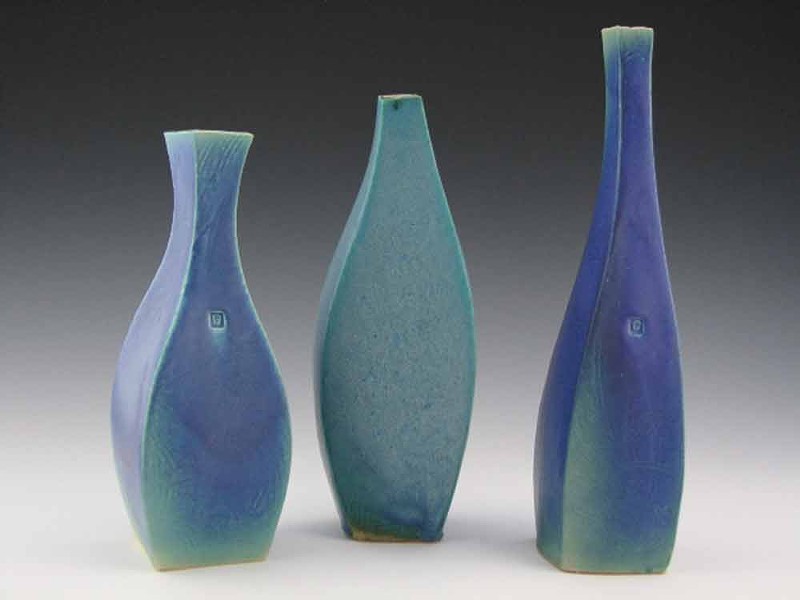 White dust permeates the cracks in his forefingers and thumbs. Celtic music wheels away in the background. Dressed in a faded red shirt with leather elbow patches and a teal-blue hat that says, "relax," ceramic artist Michael Pearce is lost in thought, assembling another slab-built teapot. He sponges down seams and files away the form, still in it's infancy without a lid, handle or spout. Behind him, innumerable sacks, bowls, dishes, chemicals and shapely bottles would make a mad scientist's heart leap. Pearce's studio is that alchemic place where ideas manifest, grow and change. Part intuition, part experiment, part luck, his art reflects a longing for something perfect, the elusive pleasure of a job well done.

Clay is demanding. Too dry and it cracks. Too wet and it's a sloppy, floppy mess. Different clay bodies, such as porcelain and stoneware, have their own peculiarities, and even subtle fluctuations in our North Coast weather add another complication. Then there's the firing process. It's not like putting a casserole in the oven. The kilns Pearce uses reach temperatures in excess of 2,400 degrees Fahrenheit. Messing around with temperatures that high is no joke, especially when his kilns are firing up to 100 pieces at once.

Still, after 40 years, Pearce keeps coming back to clay. "It's a part of me now," he says. Like many local artists, Pearce got hooked at Humboldt State University. The laid-back ceramics lab community felt natural to him. "It was really casual until my dog took a shit in [then-professor] Lou [Marak's] office," he recalls with a grin. Even without dogs, Pearce found a home there, letting his other classes go and focusing exclusively on ceramics. He moved south for a time to Mills College, where another local ceramic artist, Jim Crawford, was a professor. Pearce never officially enrolled at the women's college, but paid for studio space. "There were 18 men on campus and the rest were women. That was fantastic."

Today, Pearce is a licensed contractor who finds time on the side for his clay habit and shows his work at Arcata Artisans. For September's Arts Arcata, Pearce is featured along with Jim Lowry and Vaughn Hutchins. While his work showcases many methods of clay building, from wheel-thrown cups and pitchers to whimsical teapots, he prefers to create his vessels with slabs. And his slab-built forms, constructed from flat sheets of clay rolled through a sturdy press, are some of the strongest pieces. Their animated shapes lean to and fro, dressed in luscious glazes that drip with deep color.

When I arrived at his Dow's Prairie studio overlooking Clam Beach and Trinidad, Pearce had already rolled out a few slabs and laid them over cardboard cylinders to stiffen. Once they could stand on their own without sagging, he cut oblong shapes for the sides. Mitering their edges so they fit cleanly, Pearce scored each joint with a frizzy wire tool and smeared wet clay, called slip, into the incised lines. As he pressed the two sides together, some of the slip squished out. With a practiced swipe, Pearce blended the seam, cleaning it up and creating a solid connection. Tracing its shape into another slab, he repeated the process, adding a top and bottom. While we chatted, he cut a hole in the top and crafted a lid. Sitting off to the side was a cone-shaped slab rolled over the end of a large paint brush. Eventually, he cut the cone into a spout and finished the structure with a handle and lifter.

One misconception about clay is that a person can go from creation to completion quickly. After Pearce builds his teapot, it will sit for a few days to let the water evaporate. Once it's loaded into a kiln, the first firing takes a few more days, hardening the clay in preparation for glazing. Glazes are basically thin layers of glass that coat clay's porous surface, making vessels water-tight and adding color. Pearce sprays his fired forms with powdery, raw glaze, which his kilns magically melt into a slick, colorful finish.

One of Pearce's teapots on display this month features a mossy-green glaze on the upper portions. The piece tilts rakishly toward the spout and a surfer casually rides the lid, his hanging arm leading your eye towards the sturdy handle. Wispy patterns adorn the body of the vessel, allowing the glaze to pool in the crevices for deep green hues. Other areas are sprayed with less glaze, resulting in a thinner, metallic blush of black and mushroom-brown. Like that surfer, Pearce's pot leans eagerly into space, begging to be picked up and put to purpose.

"For the most part, I'm just learning. I'm testing," Pearce confesses. Ceramics is a medium that demands exploration. "If you're not really exploring you're not going to learn anything," he notes. Forty years in, Pearce continues to futz around with the mysterious combinations of proportion and color that can make or break a pot. "I like to make myself smile or laugh," he says. "If I can do that, then I feel like I've got a successful piece."

Ken Weiderman encourages Journal readers to stop by HSU's Reese Bullen Gallery during September to view the HSU Art Faculty exhibition, where his pit fired ceramics will be on display.