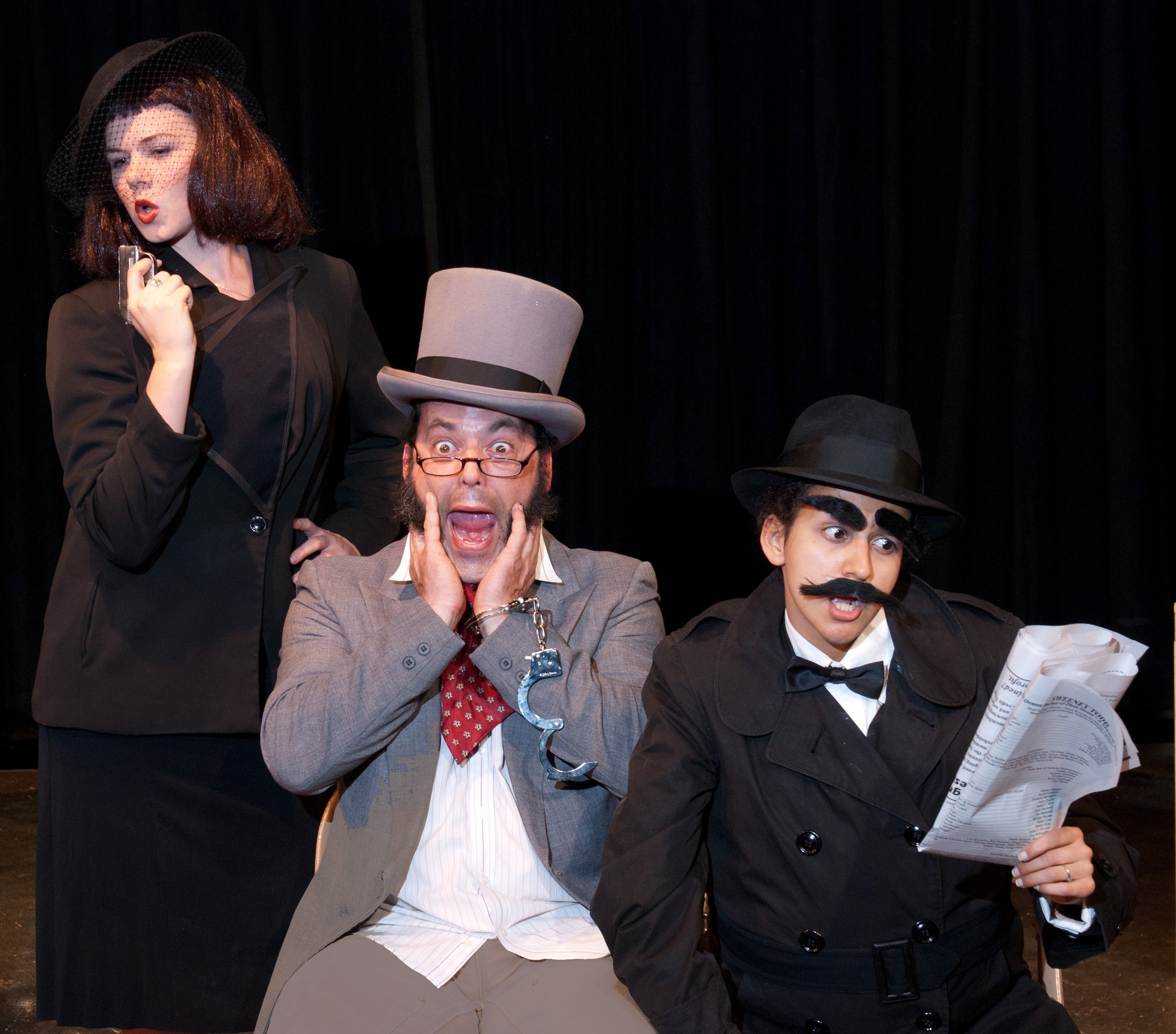 The 39 Steps is most famously a movie made by Alfred Hitchcock in England, before he relocated to Hollywood. It was preceded by the John Buchan novel and followed by several other film and TV versions, all from the UK. The 2005 play of The 39 Steps by Patrick Barlow now on stage at Ferndale Repertory Company follows the Hitchcock plot -- in fact, his name was originally in the title.

The gimmick is that all the characters in this tale of espionage and intrigue are played by four actors. At Ferndale, Gary Sommers plays the hero, Richard Hannay. Kyra Gardner plays the three women he encounters. Millie Casillas and Jeremy Webb play everybody else -- assorted police officers, bad guys, a milkman, etc. And it's all played for laughs.

The story: Hannay is watching a stage show in London starring Mr. Memory, whose talent is that he remembers obscure facts. A shot rings out, a woman accosts Hannay, and he's off on an adventure that takes him to Scotland and back, in pursuit of enemy agents, secret military plans and the mystery of whatever the 39 steps are.

The intrigue and sleuthing genres have inspired many styles of spoofing. This is not the verbal and countercultural comedy of Firesign Theatre -- it's no Nick Danger, Third Eye (although a Dr. Memory does appear in another Firesign production). It's not exactly a film parody, in the manner of Neil Simon's movie The Cheap Detective. It is mostly the Hitchcock story done as physical comedy, especially as directed by Dell'Arte grad Barney Baggett. The emphasis is on virtuoso character switches, slapstick and acrobatics. Which is fortunate, since bad Brit accents and an abundance of otherwise unintelligible dialogue don't add much.

The fast pace depends on stage magic performed by scenic and sound designer Dan Stockwell, lighting designer Greta Stockwell and costume designer Lydia Foreman, plus backstage managers Ben McBride and Juan Reynosa. Sommers threads the action with the appropriate awkward aplomb, and Gardner is an appealing love interest, while Webb and especially Casillas display admirable clown skills. There are gaping holes in the story and this presentation, but that's Hitchcock, too.

If you're expecting no more than a diverting show, this may fit the bill, especially with a bag of the popcorn from the lobby. The 39 Steps continues weekends at Ferndale Rep through Oct. 30. Tickets and information: 786-5483, ferndale-rep.org.

Scotland is also the locale for the other North Coast show that opened last weekend -- the Lerner and Loewe musical Brigadoon at HSU. Since I wrote the press releases for HSU, I can't offer an opinion here on how successfully this production presents this rarely produced classic of Broadway's Golden Age. But I can report that there's a new sound system for the singers, and a 20-piece orchestra playing the score. The New York Drama Critics Circle named the original production the best musical of the year, praising its "thoughtful beauty" representing "the lyric theatre at its best."

Lerner (book and lyrics) and Loewe (music and vocal arrangments) later collaborated on My Fair Lady and Camelot. Brigadoon follows two modern New Yorkers who stumble upon an 18th century Scottish village that exists for only one day every century. It includes the classic song, "Almost Like Being in Love."

Brigadoon is on the Van Duzer Theatre stage at HSU for one more weekend. HSUStage.blogspot.com.

On Monday, Oct. 24, Dell'Arte joins a national celebration of the 1930s Federal Theatre Project with a reading of the play It Can't Happen Here written by Sinclair Lewis, 75 years after its historic opening in 18 cities simultaneously. This time there will be readings in 20 locales, including Blue Lake. The play dramatizes how fascism might arise in America. Joan Schirle directs Michael Fields, Lynne Wells, Jackie Dandeneau, Marjorie Armstrong and other readers from Dell'Arte and the community, including me. I'll also impart a little of the history and lasting impact of the Project and this play. It all starts at 8 p.m. in the Carlo Theatre. Admission is free but reservations are recommended. 668-5663, www.dellarte.com.

Beginning next Thursday, Oct. 27, Redwood Curtain presents The Last Five Years by Jason Robert Brown, a contemporary song cycle that follows the romantic relationship of an actor and a writer. It features Nanette Voss and Kyle Ryan, directed by Dianne Zuleger. Previews are Thursday and Friday, with the official opening and reception on Saturday, all at 8 p.m. Performances continue through Nov. 19. www.redwoodcurtain.com.